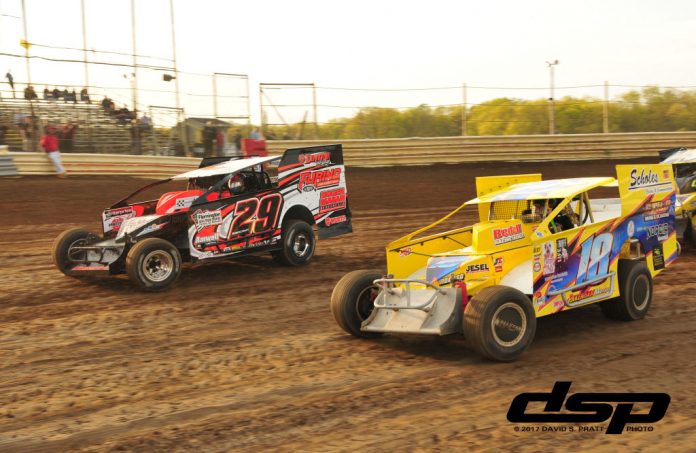 As the 30-lap 358 Modified feature began, polesitter Bryan Kuhl rocketed to the lead with Rich Rutski and Steve Davis in pursuit. After back-to-back cautions on the second circuit, Rutski passed Kuhl to take command of the field as action resumed. On lap four, the caution lights illuminated for the third and final time for DJ Ruppert. On the ensuing restart, Rutski, who chose the outside lane, outgunned Kuhl to remain on top with Davis in third, David VanHorn in fourth and Ryan Godown in fifth. On lap nine, Davis worked his way past Kuhl to assume the runner-up position. As the event reached the halfway point, Rutski built himself a half straightaway advantage over Davis with Kuhl in third and VanHorn holding off Willie Osmun and Godown in a good battle for fourth. With ten laps remaining, Rutski was approaching slower competitors and Davis was edging closer to him. By the twenty-third tour, Rutski began to reconstruct his margin as he had lapped one of his rivals to put a car between him and Davis. During the final circuits, Rutski maintained his advantage and crossed the finish line ahead of the pack to become the seventh different winner in the last seven features at New Egypt Speedway. A strong run by Davis netted him the runner-up spot. Third place was nabbed by Kuhl. After fourth place was swapped several times in the final five laps, Godown outdueled VanHorn for the position. Bryan Kuhl,
Steve Davis and Lou Cicconi scored wins in the 358 Modified heat races.

For the seventh time in 2017, Ryan Godown won the Northeast Wingless Sprint Car main event. In the non-stop 20-lap event, Jermain Godshall paced the field for the first two circuits before Lee Nardelli grabbed the lead. On lap twelve, Godown, who won the qualifying contest, worked his way past Nardelli for the top running spot and led the remaining distance. With Nardelli finishing second, Eric Jennings took third. Godshall and Rich Mellor rounded out the top five.


Eastern Auto Parts Warehouse Night is set for Saturday, August 12 at New Egypt Speedway. The racing docket includes the 358 Modifieds, Crate Modifieds and Street Stocks. All gates will open at 4:00 p.m. Hot laps get cranked up at 6:00 p.m. and the first green flag waves at 7:00 p.m. Admission to the grandstand is $20 for adults, $18 for seniors 65 and older, $10 for teens 12-15, $10 for military personal and their spouses with ID, and Kids 11 & under are FREE. Pit admission is $30 with a New Egypt Speedway license and $40 with no license.