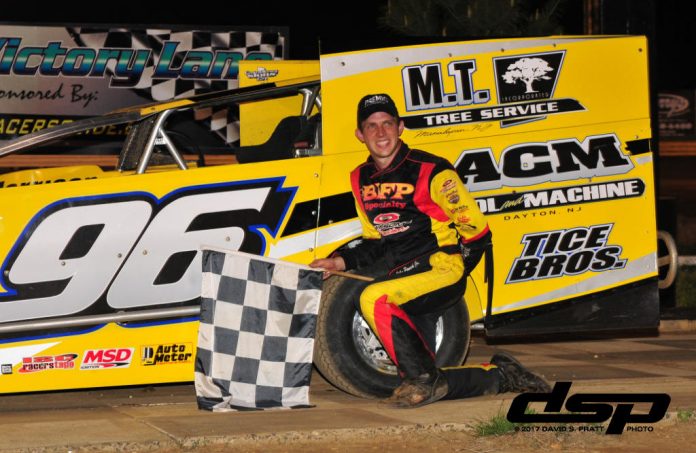 NEW EGYPT, NJ – Two of the region’s most popular racing divisions converged on New Egypt Speedway, this past Wednesday, for Jersey Rush VII presented by Pioneer Pole Buildings. JJ Grasso of Middletown, DE scored the win – and the $5,000 prize money — in the 410 Sprint Car portion of the event, while Billy Pauch Jr. of Frenchtown, NJ was victorious in an action-packed Modified feature.

“The set-up on this car was perfect tonight,” Grasso gushed in victory lane. “All I had to do is get behind the wheel and drive – it couldn’t have been more perfect.”

Robbie Stillwaggon and Kyle Reinhardt led the field to the green flag, and kicked off the 30-lap A-Main in fine fashion charging hard on the topside of the 7/16-mile dirt track – it was short lived as Danny Dietrich spun on the second circuit bringing the yellow out for the first time.

It was all Grasso on the restart, pulling away from the field and maintaining a sizable advantage as laps clicked down. Grasso and the No.37 BK Trucking machine would roll on for the win with Kyle Reinhardt coming home in the second position. Lucas Wolfe finished in the third position after an exciting battle with Davey Sammons – who settled for fourth and Ryan Smith rounded out the top-five finishers.


The big-block of three-time defending New Egypt Speedway track champion, Ryan Godown led the field to the start of the 30-lap modified feature event with Danny Bouc on his outside. Godown took the lead on the initial start, but a lap two caution slowed the field.

On the restart, Bouc took the lead with Pauch Jr. following into the second position. Action slowed for the second time on the third circuit.

Pauch Jr. took the lead on the restart with Duane Howard powering the Norm’s Save Station No. 357 into the second spot.

At the halfway point, Pauch Jr. maintained control, while all eyes were fixated on the four-car battle for the second position – with Howard holding off challenges from Bouc, Jeff Strunk, and Brandon Grosso.

Pauch would weave through heavy lapped traffic, maintaining a sizable advantage over the battle for second place, and collecting the $3,000 Jersey Rush VII victory. Howard held on to the runner-up position, while Danny Bouc finished third, Brandon Grosso in fourth, and Jeff Strunk rounded out the top five.

Oliver Communications Group Heat Race Bonuses went to Robbie Stillwaggon and Davey Sammons in the 410 Sprint Cars and Danny Bouc and Brandon Grosso in the Modifieds.

For more information about Jersey Rush visit www.jerseyrushrace.com or www.facebook.com/jerseyrush