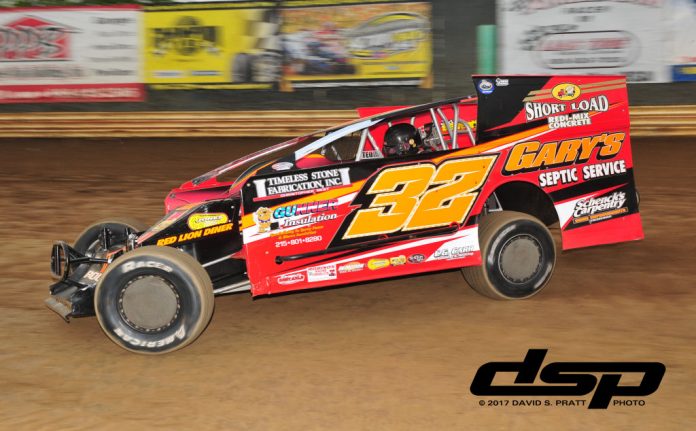 As the 30-lap 358 Modified feature got underway, John Pakenham motored to the lead with Bryan Kuhl and John McClelland in his tracks. McClelland was quickly on the move and slipped into the runner-up spot with three circuits completed. On the fifth lap, Billy Pauch, Jr. ascended into third and Danny Bouc climbed into fourth just before the only yellow flag of the contest waved for a multi-car tangle. When action resumed, Pakenham remained in control but Bouc raced into second with McClelland, Ryan Godown and Pauch, Jr. next in line. Quickly, Bouc began to pressure Pakenham for the lead and took command of the contest on lap seven. On the next circuit, McClelland raced into the runner-up spot with Godown advancing into third. On lap nine, Pauch, Jr. passed Pakenham to gain fourth place. By the halfway point, Bouc was still on top with McClelland closing and Godown, Pauch, Jr and David VanHorn trying to track down the leader. With ten laps to go, Bouc’s advantage was only a quarter of a straightaway over McClelland as the top two were approaching the back end of the field. By lap twenty-seven, Bouc was beginning to lap some competitors to put some distance between him and McClelland. When the checkered flag waved, it was Bouc in front of the pack for his second consecutive feature win and his third victory of 2017.
McClelland’s strong run resulted in a second place finish. Third spot went to Godown. By completing the race in fourth, Billy Pauch, Jr. was able to secure his first 358 Modified championship at New Egypt Speedway. Fifth was taken by David VanHorn. Bouc and PJ Oliver were victorious in the 358 Modified heat races.

After regaining the lead on lap thirteen, Billy Osmun, III paced the Hammer Sportsman field to the finish line to win the 20-lap feature and the 2017 point title. The opening eight tours were headed by Shaun Ratchford. Osmun, III, who started the race in eighth, grabbed the top running position on the ninth circuit following a restart. After another yellow flag, Cale Ross passed Osmun, III on lap twelve. One tour later, Osmun, III returned to the front and sped away from his rivals to grab his second victory of the season. With Ross finishing in second, Art Liedl came home in third. Pat Wall and Bob Lineman, Jr. completed the top five. Ross and Will Dupree won the Hammer Sportsman qualifying events.

In the non-stop 20-lap main event for the Northeast Wingless Sprint Cars, Ryan Godown, the 2017 champion, took the lead from Larry Drake on the third revolution to score his tenth victory of the year. Tim Buckwalter ran a strong race to take second. Third went to Lee Nardelli. Larry McVay was fourth and Drake finished in fifth. Godown was the heat race winner.

In the Crate Modified feature, Ryan Simmons took the lead from Jason Dunn on the final circuit of the time shortened 15-lap affair to register his first win of the year. Dunn, who had been the leader since the start of the contest, finished in the runner-up spot. Dan Fleming, Matt Stangle and Aaron Weaver filled out the top five. Seventeenth place finisher Tommy Tanner held on to his advantage in the point standings to secure his first division championship. The Crate Modified heat races were captured by Rob Mancini, Jason Dunn and JD Cranstoun.


Following a restart with two circuits remaining in the 15-lap Street Stock race, Bill Liedtka held off a final tour challenge by Jon Meyer to win his fourth feature of the year. The victory secured the season title for Liedtka who had last won the championship in 2014. Meyer came home in second. Darren Cox was third and Spider Ensinger, Sr. finished fourth. Fifth was claimed by Jeff Dirkes.

On Saturday, September 9, New Egypt Speedway will play host to the Gres Paving Legends of the Fall 75. The two division card will be headlined by a 75-lap Big Block vs. Small Block Modified affair that pays $7,500 to the winner and $500 to start. In addition, the Eastern Auto Parts Warehouse 30 will feature Crate vs. Open Sportsman cars with $1,000 going to the victor and $100 to start. The Hammer Companies, sponsor of the Sportsman division, will be on hand with a raffle for a generator and power washer along with a display offering several giveaways for fans that include pens, t-shirts and much more! Pit gates unlock at 3:00 p.m. with the grandstand turnstiles opening at 4:00 p.m. Warm ups start at 6:00 p.m. and the first green flag waves at 7:00 p.m. Admission to the grandstand is $27 for adults, $25 for seniors 65 and older, $17 for teens 12-15, $17 for military personal and their spouses with ID, and Kids 11 & under are FREE. Pit admission is $35 with a license from any track and $40 with no license.
New Egypt Speedway is located on Route 539 just minutes from Six Flags Great
Adventure and the New Jersey Turnpike. A racy 7/16-mile D-shaped dirt
oval, New Egypt Speedway serves Garden State race fans with some of the best competition in the country. New Egypt’s state-of-the-art facilities feature daylight-quality lighting and excellent sightlines from any seat in the house. The grandstands are fully wheelchair accessible with wide, clear, and well-groomed walkways. Concession facilities serve up everything from Jersey Burgers to ice cream treats at family-friendly prices. 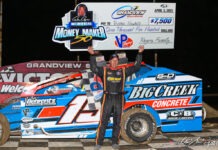 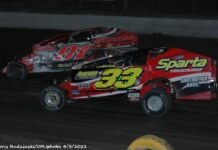