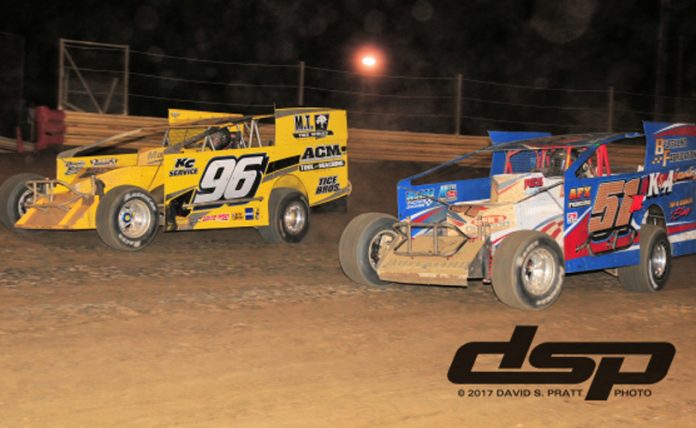 NEW EGYPT, NJ – At New Egypt Speedway’s Legends of the

The 75-lap Legends of the Fall Modified feature got underway with polesitter Rick Laubach grabbing the top running position. Behind the leader, Tad Cox, Dominick Buffalino, Ryan Krachun and David VanHorn were next in the running order. The top five remained intact through the opening seven circuits.

Following a caution and restart, Laubach was still on top as Buffalino motored past Cox to take over second with eight laps recorded. One tour later, Cox slipped back to fifth as Krachun moved into third and Billy Pauch, Jr. scrambled into fourth. Starting on the tenth revolution, Laubach was feeling pressure from Buffalino for the lead. Following back-to-back yellow flags for slowing cars on the twelfth lap, Buffalino rushed past Laubach to gain first place with Krachun and Pauch, Jr. maintaining their positions. On the sixteenth lap, Pauch, Jr. worked his way around Krachun to gain third place. On lap twenty-three, Buffalino began to enter traffic by lapping some of his rivals. With the top runners dicing through slower competitors, Pauch, Jr. was able to pluck second place away from Laubach on the twenty-sixth circuit just before the yellow lights illuminated for a slowing Cox. When action resumed, Buffalino held off Pauch to remain in control with Laubach in third and fourteenth place starting Ryan Godown taking over fourth. Godown would eventually advance into third on lap twenty-eight before dropping out of the race two circuits later with a mechanical issue. By the halfway point, Buffalino was still leading as he survived several challenges during restarts from Pauch, Jr. The pressure from Pauch, Jr. was beginning to heat up when a fuel stop took place on lap thirty-nine following the slowing of Rocco Infante on the track. Following the brief break in action, the green flag waved and Pauch, Jr. scooted past Buffalino to take the lead with VanHorn in third. After two more appearances of the yellow flag, Pauch, Jr. was still heading the field on lap forty-four
with VanHorn still in third and Brandon Grosso in fourth. By lap fifty, the top four were beginning pull away from the pack. On lap fifty-five following a caution, a duel for the lead between the top two occurred and Buffalino outran Pauch, Jr. to ascend to the top of the field with Grosso zipping past VanHorn for third. Following the final caution of the contest on lap sixty-one, Buffalino repelled a challenge by Pauch, Jr. to remain in front with Grosso, Rich Rutski and VanHorn in pursuit. With ten to go, the top two were pedaling away from the rest of the field. As the officials flashed the signal that only two laps remained in the race, Buffalino’s advantage over Pauch, Jr. was slightly evaporating as lap traffic was just ahead of him. Over the final tours, Buffalino was able to maintain his lead and he scored
his second victory of the year at New Egypt Speedway. Pauch, Jr., the newly crowned 2017 358 Modified champion, came home in second. A late surge by VanHorn earned him third place. Grosso completed the event in fourth and Rutski finished in fifth. John Pakenham, Billy Pauch, Jr. and Wade Hendrickson recorded wins in the heat races for the Modifieds.

In the 30-lap Eastern Autoparts Warehouse Sportsman feature, Billy Osmun, III became the leader on the sixth circuit and he paced the field to capture the victory. The win was the third of the year for the 2017 Sportsman champion and his second consecutive checkered flag. Cale Ross came from eleventh place to finish in second. Bob Lineman, Jr. was third.

On Saturday October 21, the All Star Cup Shootout will take place at New Egypt Speedway featuring Big Block Modifieds vs. Small Block Modifieds in a 60-lap event. The four-division card will include the Crate Modifieds, Hammer Sportsman and Northeast Wingless Sprint Cars.