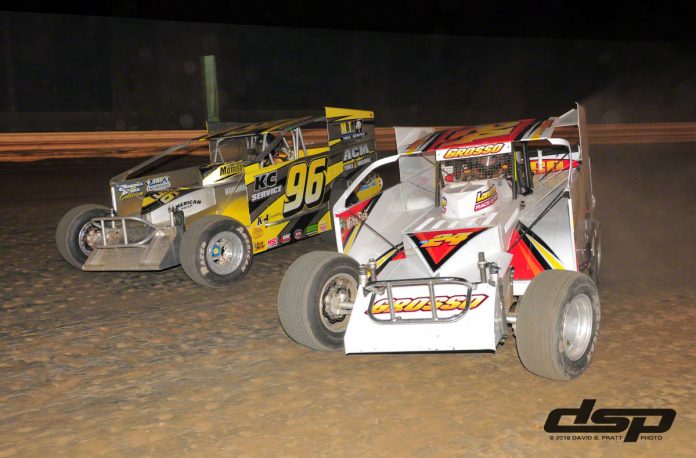 Polesitter Chad Barney grabbed the lead as the 30-lap Modified feature began with Richie Pratt, Jr. and Jim Bobbitt next in line. After several caution periods and eight tours recorded, Barney was still in charge with Steve Davis, Matt Stangle, Billy Pauch, Jr. and Pratt, Jr. completing the top five. At the halfway point, the front four of Barney, Davis, Stangle and Pauch, Jr. were racing in close quarters of one another. Shortly afterwards, Pauch, Jr., who started the event in twenty-fourth, began to use the middle racing lanes in the corners and motored into second place on the seventeenth revolution. Two laps later, Pauch, Jr. scooted past Barney to take over first place. Once on top, Pauch, Jr. began to pull away from the field.

Behind the leader and with nine circuits to go, Stangle edged up into third while eighteenth place starting David VanHorn continued his march forward as he moved into fourth. As Pauch, Jr. was beginning to approach lap traffic, his comfortable lead evaporated due to a caution period for Tim Apgar with four laps to go. On the ensuing restart, Pauch, Jr. held off Barney with VanHorn advancing into third, Davis riding in fourth and Stangle slipping back to fifth. Over the final laps, Pauch, Jr. distanced himself away from the pack and cruised to his second win of the year. Barney’s strong run netted him second place. With VanHorn finishing third, Davis was fourth and Stangle was fifth. Matt Stangle, Ryan Godown and Dominick Buffalino were the Modified heat winners.

Art Liedl, who has the most feature wins in the former SS Sprint division at New Egypt Speedway, was victorious in a Hammer Sportsman feature for the first time since 2004. Liedl captured his second career win in the division after taking the lead from Jimmy Amato on the third circuit of the 20-lap contest. David Burns claimed the runner-up spot while Billy Osmun finished in third. The top five was filled out by Cale Ross and Amato. The Hammer Sportsman heat races were taken by David Burns and Billy Osmun.


Kyle Kania and Dan Fleming were the victors in the Crate Modified heat races.

Twin twenty-lap features for the Modifieds highlight the Saturday, April 28 program at New Egypt Speedway. The Crate Modifieds, Street Stocks, 4-Cylinders, Lyons Construction/Metal Fab Rookie Sportsman & Garden State Vintage Stock Car Club will be in action as well. Pit gates swing open at 3:00 p.m. with the grandstand turnstiles unlocking at 4:00 p.m. Hot laps get underway at 5:00 p.m. and the first green flag waves at 6:00 p.m. Admission to the grandstand is $25 for adults, $20 for seniors 65 and older, $12 for teens 12-15, $12 for military personal and their spouses with ID, and Kids 11 & under are FREE. Pit admission is $30 with a New Egypt Speedway license and $40 with no license.