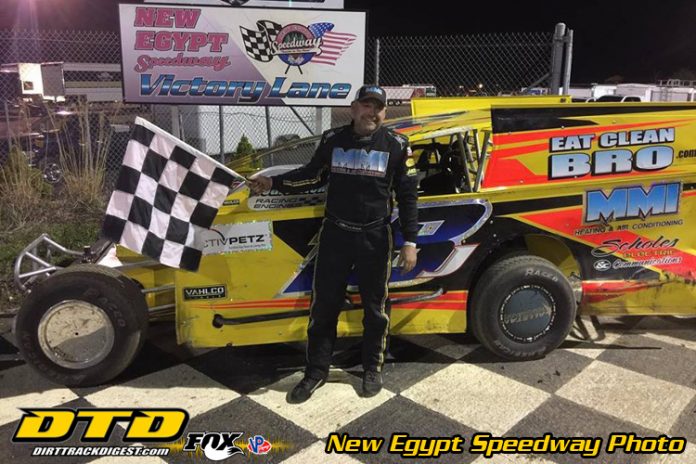 
After three attempts, the first 20-lap Modified feature began with Dominick
Buffalino taking command over Jeff Bubori and Rich Rutski. With six circuits
in the books, Buffalino was running strong with Rutski advancing into second
and Ryan Krachun running in third. On the eighth circuit, Buffalino, who had
a full straightaway advantage over the field, pulled into the infield and
retired from the race with a mechanical issue. Rutski, a teammate of
Buffalino, became the new leader with Krachun taking over second and Danny
Bouc moving into third place. Three laps later, Krachun was closing in on
Rutski when the yellow flag waved for a spinning Kevin Vaclavicek. On the
ensuing restart, Rutski held off a challenge for the lead with Ryan Godown
charging into second and John McClelland taking over third. With two
additional cautions and resumptions in the final six laps, Rutski held off
additional threats to his lead and raced home to his second career win in
the Modified ranks. The runner-up spot went to McClelland. With Krachun
taking third, Godown slipped back in the final tours to finish in fourth.
Jimmy Horton completed the top five.


As the top twelve finishers in the first contest were inverted, the second
20-lap feature got underway with second place starting Chad Barney grabbing
the lead. Jeff Bubori and Kevin Vaclavicek were next in line. With three
circuits in the books, Vaclavicek advanced past Bubori and began to track
down Barney. On the fourth lap, Vaclavicek sped past Barney to become the
new leader. Once in front, Vaclavicek began to pull away from the field. On
the eighth circuit, Vaclavicek’s sizeable advantage was lost as Barney, who
had lost second place to Bubori, spun while running in third place. After a
few unsuccessful tries, green flag racing returned with Vaclavicek
maintaining his position, Ryan Godown in second and Matt Stangle in third.
At the halfway point, Stangle drove by Godown to take over the runner-up
spot. Over the final half of the affair, Vaclavicek drove flawlessly as he
logged his first career Modified feature victory. Second place went to
Stangle. Godown completed the race in third with John McClelland taking
fourth and Jimmy Horton was fifth. The Modified heat winners were Rich
Rutski, Blaine Bracelin and Dominick Buffalino.

In the 20-lap Crate Modified main event, Dan Fleming took the lead from
Robbie Dunn on the eleventh tour and paced the field the rest of the way.
The win was Fleming’s second career checkered flag in the division. Kyle
Kania’s last lap charge past John Aumick earned him a second place finish.
With Aumick in third, eleventh place starting Ryan Simmons was fourth. After
starting in tenth, Johnny Bangs completed the race in fifth. John Aumick and
John Criscione were victorious in the Crate Modified qualifying races.

Jon Meyer slipped beneath Lee Allen in the first corner of the last circuit
to take the victory in the 15-lap Street Stock contest. Meyer, who was
running in second when he was involved in an incident on the eighth
revolution, was able to roar back through the field to collect his third
career victory. Billy Wroble slipped by Allen on the final lap as well to
take second place. With Allen finishing third, Jim Avery was fourth and
Jerry Stanzione was fifth.

Joe Garey, Sr. led every step of the way to gain the checkered flag in the
10-lap race for the 4-Cylinders. Justin Dunn, Scott Miller, Scott Dunn and
Joe Garey, Jr. followed the victor across the finish line.

The May Modified Madness Series gets underway on Saturday, May 5 at New
Egypt Speedway with the round of 24. This unique four race series features
the top-24 in the Modified point standings competing in a bracket style
elimination tournament. The Modifieds will be joined by the Larry’s Hot Rods
& Harley’s Northeast Wingless Sprint Cars, Hammer Sportsman, Crate
Modifieds, 4-Cylinders and the Lyons Construction/Metal Fab Rookie
Sportsman. Competitors may begin to enter the pits at 3:00 p.m. and the
grandstand gates open at 4:00 p.m. Hot laps get underway at 5:00 p.m. with
racing starting at 6:00 p.m. Admission to the grandstand is $20 for adults,
$18 for seniors 65 and older, $10 for teens 12-15, $10 for military personal
and their spouses with ID, and Kids 11 & under are FREE. Pit admission is
$30 with a New Egypt Speedway license and $40 with no license.