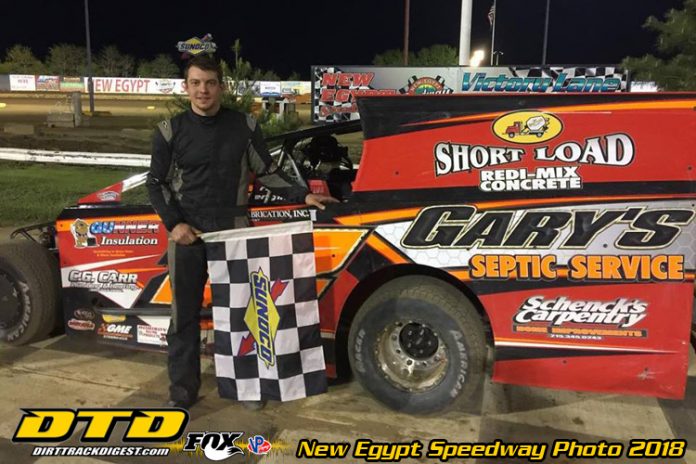 
As the 30-lap Modified feature got underway, JR Fulper jumped out to the
front with Steve Davis and Brian Papiez next in line. Eighth place starting
Danny Bouc quickly began to move forward and was in second place with five
tours completed. On the sixth circuit, a slowing Bryan Kuhl brought out the
first yellow flag. When the green flag waved again, Bouc blasted by Fulper
to take the lead with David VanHorn driving into third. VanHorn, who started
the contest in ninth, slipped by Fulper on lap nine to take over second.
Following another caution period on the ninth revolution, Bouc held off
VanHorn to maintain his advantage with Billy Pauch, Jr. taking third from
Fulper. After a trio of cautions at the halfway point, Bouc was still pacing
the field over VanHorn and Pauch, Jr. with Ryan Godown running in fourth
after starting the race in twenty-fifth position using a backup car. Over
the next several laps, Bouc was feeling pressure from VanHorn for the lead
while Pauch, Jr. and Godown were dueling for third. With five laps remaining
and Bouc approaching slower traffic, the yellow lights illuminated for Brian
Roemer. During this appearance of the caution flag, Ryan Godown relinquished
fourth place as he visited his pit stall. With the restart marred by a
multi-car tangle, green flag racing finally resumed with Bouc retaining his
edge over VanHorn and Pauch, Jr. Over the final laps, Bouc went unchallenged
to win his ninth career Modified checkered flag at New Egypt Speedway. With
the victory, Bouc has automatically qualified for the final round of the May
Madness Modified Series. With VanHorn taking second, Pauch, Jr. came home in
third. Eleventh place starting Ryan Krachun finished fourth. Brandon Grosso
came from fifteenth to complete the race in fifth. Steve Davis, Danny Bouc
and Brian Papiez were victorious in the heat races for the Modifieds.

With the time limit reached in the scheduled 20-lap Crate Modified feature,
Joe Toth was scored as the winner with eighteen circuits completed. Toth
took the lead from Paul Hartwig on the second circuit and paced the field
for the remainder of the contest for his first career victory at New Egypt
Speedway. Connor King drove up from his fourteenth place start to take the
runner-up spot. Jeremy Martino, John Criscione and Kyle Kania completed the
top five. Joe Toth and Ryan Simmons were the winners in the Crate Modified
heat races.

Joe Garey, Sr. racked up his second 2018 visit to victory lane by leading
every step of the way in the 15-lap race for the 4-Cylinders. Justin Dunn,
Jim Backowski, Scott Dunn and Joe Garey, Jr. finished in order behind the
winner.

On Saturday, May 12 at New Egypt Speedway, the May Madness Modified Series
continues with the Round of 12. The Mid Atlantic Sprint Car Series will be
competing in two feature events including the postponed contest from April
14. The Hammer Sportsman, Street Stocks and the Lyons Construction/Metal Fab
Rookie Sportsman fill out the card. The gates to the pit area unlock at 2:30
p.m. with the grandstand turnstiles opening at 3:30 p.m. Hot laps get
cranked up at 4:30 p.m. and the first green flag waves at 5:30 p.m.
Admission to the grandstand is $20 for adults, $18 for seniors 65 and older,
$10 for teens 12-15, $10 for military personal and their spouses with ID,
and Kids 11 & under are FREE. Pit admission is $30 with a New Egypt Speedway
license and $40 with no license.