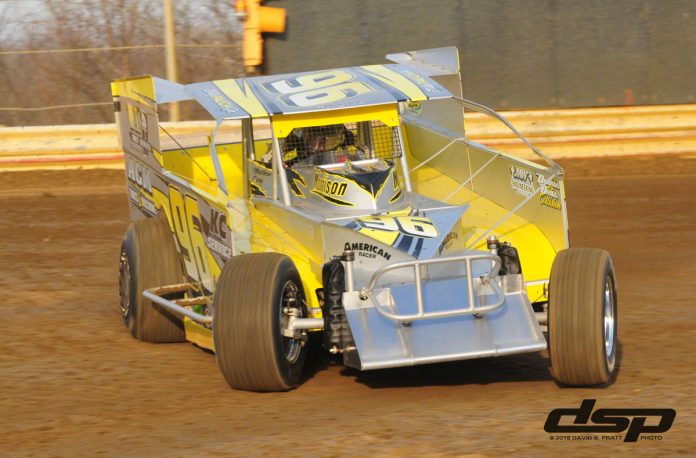 Steve Davis grabbed the lead as the 30-lap Modified feature began. Following two caution periods and five tours completed, Davis was still in control with Ryan Godown and Billy Pauch, Jr. next in line and battling for second place. By lap seven, Pauch, Jr. slipped by Godown to take over second.
Following another break in the action for debris on the track on the eighth circuit, Pauch, Jr. blasted by Davis and into first place. Twelfth place starting David VanHorn was continuing his advancement towards the front as he motored by Godown and into third with ten revolutions completed. After an additional appearance of the yellow flag on lap eleven, VanHorn slipped by Davis and began to pursue Pauch, Jr. As the contest reached the halfway point, the top two remained intact with Brandon Grosso in third, Danny Bouc in fourth and Godown dropping down to fifth. On lap sixteen, a tight battle for the lead led to slight contact between the top two of Pauch, Jr. and VanHorn. With ten laps remaining, Pauch, Jr. had pulled slightly away from his rivals with VanHorn holding off Grosso for second, Bouc in fourth and John McClelland climbing into fifth after an earlier visit to the pits.
Throughout the final third of the race, Pauch, Jr. hit his marks and crossed the finish line to gain his third victory of the year. VanHorn held off the strong advancements of Grosso to finish in second. With Grosso in third, Bouc was fourth and McClelland was fifth. By placing ahead of Bouc, McClelland and Dominick Buffalino in the May Modified Madness Series finale, Grosso won the 2018 May Modified Madness title. Ryan Godown and David VanHorn won the Modified heat races.

David Burns, the 2017 Lyons Construction/Metal Fab Rookie champion, inherited the lead on the eleventh circuit and paced the field for the remaining distance to win the 20-lap Hammer Sportsman feature. Joseph Brown led the opening ten tours of the race. A restart following a caution on the tenth lap saw the top two of Brown and Shaun Ratchford collide and set off a chain reaction accident in front of the field. The incident elevated Burns into first place. Defending champion Billy Osmun completed the race in second. After missing his heat race due to mechanical issues, fourteenth place starting Art Liedl finished the contest in third. Marty Resnick was fourth and Bob Lineman, Jr came home in fifth. Hammer Sportsman qualifying events went to Billy Osmun and David Burns.

With the time limit reached in the scheduled 20-lap Crate Modified feature, Eric Palmer was declared the victor when the checkered flag waved after sixteen circuits were completed. The triumph was Palmer’s eighth career win.
The runner-up spot was taken by Steve Hicks. Third place went to John Aumick. Kyle Kania wound up in fourth with fifth going to Ryan Simmons. Rob Mancini and Eric Palmer were victorious in the heat races for the Crate Modifieds.

In the final Lyons Construction/Metal Fab Rookie feature of the season, Ryan Heim won the 12-lap race and the season championship. Heim finished first in seven of the eight Rookie events in 2018. Bobby Holzwarth was next in line.
Kevin Borden, Jr., Matt Miller and Paige Brown rounded out the top five.

Several big events are set to roll into New Egypt Speedway. First up, the Monster Truck Racing League Presents the School’s Out Monster Truck Summer Smash on Saturday, June 23 and Sunday, June 24. The legendary Bigfoot, Snake Bite, Equalizer, Hot Tamale and several more Monster Trucks along with a Freestyle Motocross are set to entertain fans of all ages. Monster Truck rides will be available for $10. On Saturday, June 23, gates open at 5:30 p.m. with a pit party getting underway at 5:30 p.m. The show starts at 7:30 p.m. On Sunday, June 24, the grandstand turnstiles unlock at 1:00 p.m. and the pit party kicks off at 1:30 p.m. The show begins at 3:00 p.m. Adult tickets can be purchased online for $20 or at the gate for $25. Tickets for Kids between the ages of 4 and 12 are $10. All children 3 and under are admitted for free. A family 4-pack (2 Adults & 2 Kids) is available only online for $50. Tickets can be purchased online at https://www.eventbrite.com/e/new-egypt-speedway-schools-out-monster-truck-su
mmer-smash-featuring-bigfoot-tickets-42046084972.

The Garden State Gunfight 2 will be held on Wednesday, June 27th at New Egypt Speedway. The top Modified drivers from all across the region will take part in a 60-lap feature with $6,000 going to the winner and $400 to start the main event. A 30-lap event for the Crate Modifieds vs. Open Sportsman will be on the card as well. Pit gates unlock at 4:00 p.m. with the grandstand ticket windows opening at 5:00 p.m. Hot laps start at 6:00 p.m. and the first green flag waves at 7:00 p.m. Admission to the grandstand is $25 for adults, $23 for seniors 65 and older, $15 for teens 12-15, $15 for military personal and their spouses with ID, and Kids 11 & under are FREE. Pit admission is $35 with any track license and $40 with no license.