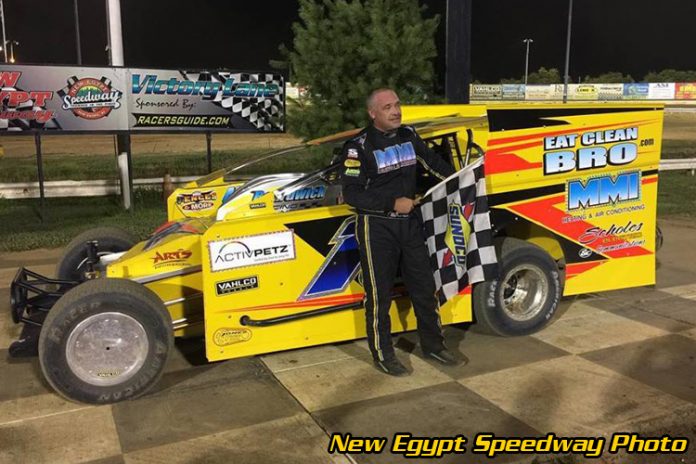 After the original start was marred by a multi-car tangle in turn one, the 30-lap Modified feature began with polesitter Rich Rutski grabbing the lead and Steve Davis running in  second. Following a caution period on the third circuit, Davis sped past Rutski on the restart to gain first place. After a trio of cautions on lap five, Davis was still on top with Rutski and Brian Papiez next in line. Over the next few tours, Rutski began to track down
Davis and returned to the lead with ten laps completed. By the halfway point, Rutski had established a comfortable margin over Davis with Billy Pauch Jr. in third, Papiez in fourth and Danny Bouc in fifth. With ten laps remaining, Rutski was beginning to navigate through lap traffic as Pauch Jr. edged past Davis for second. Brandon Grosso, who won the July 7 feature, was continuing his march to the front by moving into fifth on lap twenty-one. With five circuits to go, Rutski had nearly a full straightway advantage over Pauch Jr. with a three car battle for third between Davis, Papiez and Grosso beginning to heat up. Over the final tours, Rutski’s edge over Pauch Jr. narrowed but Rutski held on for his second win of the season and the third of his career. Pauch Jr. finished in second. Grosso won the good clash for third in the closing circuits. Davis came home in fourth and Bouc rallied by Papiez on the last lap to finish in fifth. Rich Rutski, Davey Sammons and David VanHorn recorded wins in the heats for the Modifieds.

In the 20-lap Hammer Sportsman feature, Billy Osmun grabbed the lead at the midway point and remained in control the rest of the way to score his first win of the season. Shaun Ratchford led the opening nine revolutions before the eleventh place starting Osmun ascended to the front. Cale Ross finished in second. After starting in thirteenth, Kyle Kania completed the race in third. Fourth went to Ratchford with Ryan Heim taking fifth. Hammer
Sportsman qualifying races were taken by Cale Ross and Shaun Ratchford.

Bill Liedtka regained the lead with two circuits remaining to capture the 15-lap race for the Street Stocks. After Spider Ensinger Sr. paced the field for the opening tour, the sixth place starting Liedtka took over. During a caution on lap three, Liedtka retired to the pits with a flat tire and Ensinger Sr. returned to the top of the field. On the sixth lap, Mick Search
motored to the front with Liedtka in fourth and on the march forward. On lap thirteen, Liedtka slipped by Search and went on to win his third feature of the year. With the victory, Liedtka is now the all-time leader in wins in the division with a total of twenty-five. Search finished in second. Jon Meyer, Ensinger Sr. and Billy Wroble rounded out the top five.

After taking the lead from his son on the seventh revolution, Joe Garey Sr. sped away from the competition to register his fifth win of the year in the 15-lap 4-Cylinder race. Joe Garey Jr. finished second and Tom Stavola was third.


Eastern Auto Parts Warehouse Night is set for Saturday, July 21 at New Egypt Speedway. The Mid Atlantic Sprint Car Series will be on hand for an interregional event plus a make-up feature from April 14. The Modifieds, Larry’s Hot Rods & Harley’s Northeast Wingless Sprint Cars & Garden State Vintage Stock Car Club are on the racing docket as well. The pit gates swing open at 4:00 p.m. and the grandstand turnstiles unlock at 5:00 p.m. Hot laps
start at 6:00 p.m. and racing begins at 7:00 p.m. Admission to the grandstand is $20 for adults, $18 for seniors 65 and older, $10 for teens 12-15, $10 for military personal and their spouses with ID, and Kids 11 & under are FREE. Pit admission is $30 with a New Egypt Speedway license and $40 with no license.