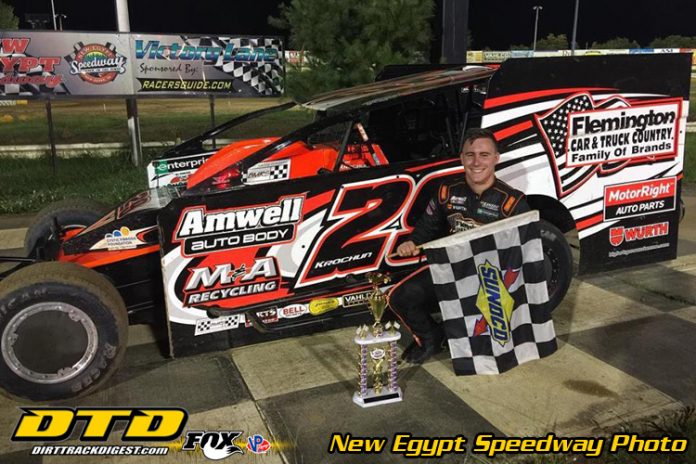 As the 30-lap Modified feature got underway, PJ Oliver grabbed the lead. Sixth place starting Ryan Krachun was quickly on the move as he traveled into the runner-up spot with three laps in the books. After the yellow lights illuminated on the third circuit, Oliver was still on top with Krachun in second and Billy Pauch Jr., who started the contest in eleventh, motoring into third. Krachun was beginning to reel in Oliver just before two appearances of the yellow flag on the seventh revolution. Once racing resumed, Krachun raced past Oliver to gain first place with Pauch Jr. slipping into second and Oliver, Steve Davis and Jimmy Horton next in line.

Following an additional caution period, Krachun was still setting the pace at the halfway point with Pauch Jr., Davis, Oliver and TJ Lilly completing the top five. One tour later, Horton would work his way past Lilly to regain fifth. With ten laps to go, Krachun had a three-car advantage over Pauch Jr.

On lap twenty one, David VanHorn, who was the point leader entering the race, stopped in the fourth corner to bring out the final yellow flag of the contest. When the green flag waved, Krachun repelled another challenge by Pauch Jr. to maintain his lead with Oliver, Davis, and Horton rounding out the top five. With only five to go, Krachun and Pauch Jr. had pulled away from the field with Krachun having a two-car length advantage. Over the final tours, Krachun continued his strong pace to record his third career checkered flag and his first since 2015. With Pauch Jr. finishing in second, Oliver netted third. Davis came home in fourth and Horton captured fifth.

The Modified heat races were claimed by PJ Oliver, Steve Davis, and Billy Pauch Jr. Brandon Grosso was the victor in the consolation contest.


In the non-stop feature for the Hammer Sportsman, Bob Lineman Jr. led from start to finish to win the 20-lap race. The victory was the second of the year for Lineman Jr. and the eighteenth of his career at New Egypt Speedway.

On Saturday, August 25 at New Egypt Speedway, the Hammer Companies will be presenting Fan Appreciation Night. Plenty of giveaways will be doled out during the evening and Dollar Dogs return as hot dogs will be available for $1. On the track, the Hammer Sportsman, Crate Modifieds, Larry’s Hot Rods & Harley’s Northeast Wingless Sprint Cars, Street Stocks, 4-Cylinders, and Garden State Vintage Stock Car Club will be in action. Plus, pit crew members will take to the track in Mechanic Races to close out the night. The pit gates open at 4:00 p.m. with the grandstand turnstiles unlocking at 5:00 p.m. Hot laps start at 6:00 p.m. and the first green flag waves at 7:00 p.m.
Admission to the grandstand is $15 for adults, $12 for seniors 65 and older,
$8 for teens 12-15, $8 for military personal and their spouses with ID, and kids 11 & under are FREE. Pit admission is $30 with a New Egypt Speedway license and $40 with no license.