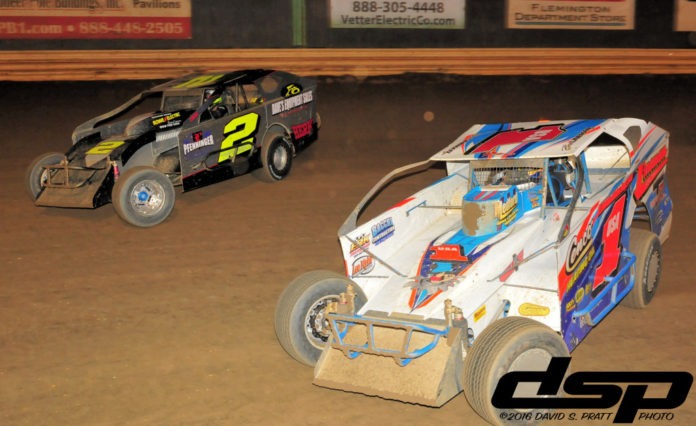 As the 20-lap Hammer Sportsman feature began, Jimmy Amato pedaled to the front with Ryan Heim and Bob Lineman Jr. next in line. On the second circuit, Lineman Jr. motored past Heim for second just before the yellow lights illuminated on the track for Pat Wall. When action resumed, Lineman Jr. swept past Amato for the lead. Heim regained second place by slipping by Amato on the fourth lap. Seventh place starting Cale Ross continued his advancement towards the front by gaining third place on the fifth revolution. At the halfway point, Lineman Jr. was comfortably in front with Heim, Ross and David Burns in tow. With a good stretch of green flag racing, Lineman Jr. continued his solid advantage over his rivals until Mickey Kessler’s ride stopped in turn two with one lap remaining. On the ensuing restart, Lineman Jr. kept his lead and he was approaching the finish line when a fourth corner incident between Heim and Ross brought out the caution flag for the final time. As the green flag waved again, Lineman Jr. kept his advantage over the new second place runner, Burns, to take his second consecutive win and third of the year. With the runner-up spot going to Burns, Art Liedl came from the ninth starting spot to finish third. Will Dupree was fourth and Joseph Brown was fifth. The Hammer Sportsman heat race victors were Bob Lineman Jr. and Cale Ross.

Following a skirmish with three laps to go between the first and second place competitors, Dan Fleming inherited the top running position and led the rest of the way for his second 20-lap Crate Modified feature win in a row. After Aaron Weaver was in front for the opening circuit, John Criscione took over with Joe Toth proceeding into second. As the race advanced in the second half, the top two of Criscione and Toth remained intact with Dan Fleming riding in third. Racing in tight quarters, Toth was able to take the lead from Criscione on lap seventeen just before contact by Criscione sent Toth spinning in turn one. Due to the incident, Criscione was relegated to the back of the field and Fleming became the new leader. Fleming would lead the final circuits to score the victory. Kyle Kania wound up in second with Eric Palmer finishing third. Fourth place went to Ryan Simmons and Johnny Bangs finished in fifth. Johnny Bangs, George Gareis Jr., and John Criscione won the Crate Modified qualifying races.

After taking the lead from Jerry Stanzione on the third circuit, Jon Meyer paced his rivals the remaining distance to win the 15-lap Street Stock race.
The victory was Meyer’s fourth of the year and sixth of his career. Bill Liedtka came home in second place. Third place was taken by Jimmy Avery.
Mick Search and Billy Wroble completed the top five.

In the non-stop 15-lap affair for the 4-Cylinders, Justin Dunn led every step of the way and held off the advances of the Garey clan to capture his first feature win of the season. Joe Garey Jr. nipped his father at the line to claim second. With Joe Garey Sr. taking third, JC Duvall was fourth and Doug Ashford was fifth.

The Flemington Car & Truck Country Family of Dealerships presents Twins Night at New Egypt Speedway on Saturday, September 1. All twins arriving together at the track will receive free grandstand admission. On the dirt oval, the Modifieds return to action with twin 20-lap features leading up to their championship night on Saturday, September 8. The Mid-Atlantic Sprint Car Series will be in competition with a complete show including a feature and the held over feature from April 14. The Larry’s Hot Rods & Harley’s Northeast Wingless Sprint Cars and Crate Modifieds fill out the four-division program. Competitors can begin to enter the pits at 3:00 p.m.
and the grandstand ticket windows open at 4:00 p.m. Hot laps start at 5:00 p.m. and racing gets underway at 6:00 p.m. Admission to the grandstand is
$25 for adults, $23 for seniors 65 and older, $15 for teens 12-15, $15 for military personal and their spouses with ID, and kids 11 & under are FREE.
Pit admission is $30 with a New Egypt Speedway license and $40 with no license.