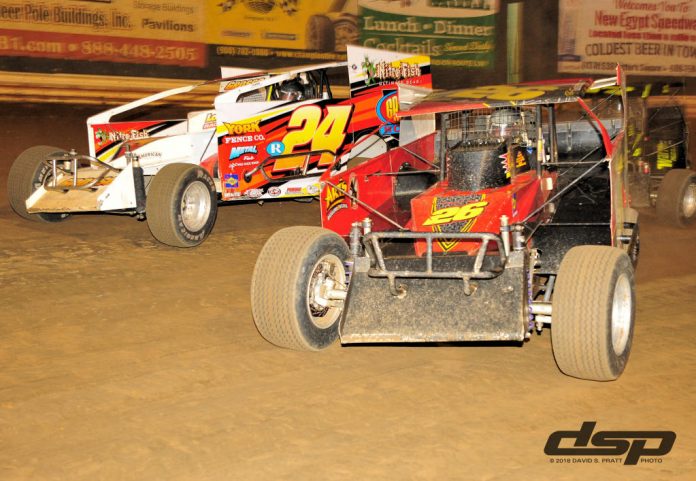 After several attempts, the first of two 20-lap features for the Modifieds got underway with Rocco Infante on top. On the third revolution, Bryan Kuhl slipped by John Pakenham to move into second. By lap five, Kuhl was challenging Infante for the lead. At the halfway point with Infante still in charge, the caution flag waved for a tangle between Rich Rutski and PJ Oliver. On the ensuing restart, Kuhl bolted past Infante and ascended to the front of the pack with Infante and Chad Barney next in line. With six laps left, Barney drove by Infante for second as Kuhl was stretching out his advantage. Although the margin between Kuhl and Barney would close in the final laps, Kuhl went unchallenged to register his first career Modified win. Barney’s strong run netted him second. With Infante finishing third, Pakenham came home in fourth. Brian Papiez was fifth after starting the race in twelfth.

With the top eleven finishers inverted for the second 20-lap Modified feature, polesitter Brandon Grosso grabbed the lead with Matt Stangle and Kevin Vaclavicek in tow. Following a trio of cautions, Grosso was still on top with seven circuits completed and Vaclavicek was in second. Stangle regained the runner-up position on lap eight just before the yellow lights illuminated for Rich Rutski. At the halfway point, Grosso was still pacing the field with Stangle in second, Davey Sammons in third and David VanHorn in fourth. On the eleventh revolution, the yellow flag waved for the final time for an incident between JR Fulper and Ryan Krachun. When racing resumed, the top two of Grosso and Stangle remained intact and VanHorn advanced into third as a mechanical issue forced a slowing Sammons to drop out of the race. With five to go, Grosso was cruising along as VanHorn was reeling in Stangle. Grosso would lead every lap of the contest to score his second win of the year. VanHorn got by Stangle with two circuits left to finish in second. With Stangle taking third, Vaclavicek was fourth and Chad Barney was fifth. The Modified heats were won by Brandon Grosso, Chad Barney and Davey Sammons. JR Fulper won the consolation race.

Polesitter Mark Bitner led from start to finish to win the 20-lap main event for the Mid-Atlantic Sprint Cars. The victory was the first of the year for Bitner in the series and his eighth career checkered flag at New Egypt Speedway. The runner-up spot was claimed by Andy Best. Austin Bishop completed the race in third. Eddie Wagner came from his eighth starting position to finish in fourth. Fifth was taken by Jason Dunn. Jeff Geiges and Austin Bishop were victors in the qualifying races for the Mid-Atlantic Sprint Cars.

In the 20-lap feature for the Mid-Atlantic Sprint Cars from April 14, Ryan Stillwaggon overtook Jeff Geiges with two circuits remaining and pulled away to capture his first career New Egypt Speedway checkered flag. The victory was the second of the year for Stillwaggon in the series. Geiges, who led the opening eighteen tours, finished second. Third went to Mark Bitner.
Austin Bishop was fourth and Eddie Wagner came home in fifth.

In the 20-lap main event for the Larry’s Hot Rods & Harley’s Northeast Wingless Sprint Cars, Jermain Godshall powered out of the final corner of the last lap to edge out Duane Nixon for his second victory of the year.
With Nixon taking second after leading nineteen tours of the race, Brian Spencer was third. Joey Biasi, the heat race winner, wound up in fourth and Heidi Hedin was fifth.

On Saturday, September 8 at New Egypt Speedway, the 2018 track champion in the Modified division will be decided on Modified Championship and First Responders Night. All First Responders will receive free grandstand admission with proper identification. Along with the Modifieds, the Hammer Sportsman, Street Stocks and 4-Cylinders will be in competition. The pit area opens at 3:00 p.m. with the grandstand gates unlocking at 4:00 p.m. Hot laps get cranked up at 5:00 p.m. and the racing action begins at 6:00 p.m.
Admission to the grandstand is $20 for adults, $18 for seniors 65 and older,
$10 for teens 12-15, $10 for military personal and their spouses with ID, and Kids 11 & under are free. Pit admission is $30 with a New Egypt Speedway license and $40 with no license. 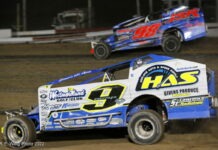