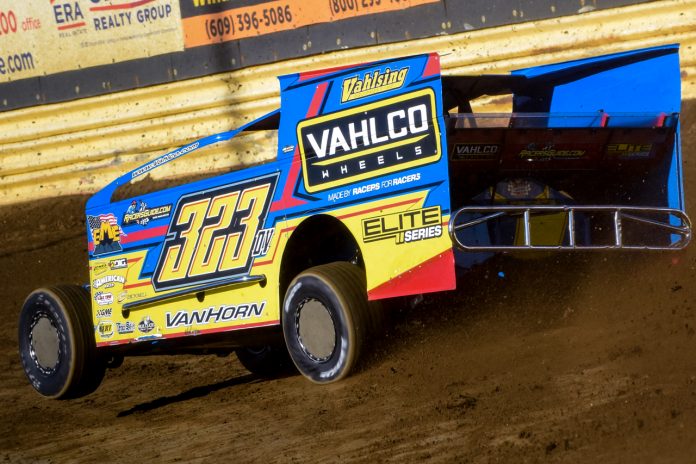 NEW EGYPT, NJ – David VanHorn celebrated his first career New Egypt Speedway Modified Track Championship worth $10,000 this past Saturday night in front of a packed ballroom at the Clarion of Toms River.

“If you look at some of the names that have won track champions at New Egypt, you have guys like Roger Laureno, Billy Pauch, Jimmy Horton and Frank Cozze. That’s some good company to be in”, said VanHorn. “The competition at New Egypt weekly is about as tough as it is anywhere, they have a lot of talent through out the field and a lot of young talent coming up through the ranks.”

A regular at the Ocean County D-Shaped oval since 2010, DVH notched his title on a base of consistency. VanHorn ended the 2018 NES points race without a points-paying win, nine Top-5’s and 13 Top-10’s in 15 points paying races. The only time VanHorn failed to finish out of the Top-10 was on May 9th following a flat tire and August 18th with a blown motor. David’s only win of the season came in the Non-Points Garden State Gunfight held in June.

“I can’t thank Fred Vahlsing enough for what he has done for me, a few year’s ago he called me while we were on our way to a Deyo race and he asked me to drive his car and I told him I wanted to win championships for him and I’m glad that I can make good on that”, revealed VanHorn. “This all wouldn’t be possible without my family either, they support me no matter what, this one is for them as much as it is me.”

The ageless Karl Freyer was officially crowned the 2018 Larry’s Hot Rods & Harley’s Northeast Wingless Sprint Car champion and announced some exciting news that the legendary Stan Ploski would be driving his car during the 2019 season at New Egypt Speedway.

Bob Lineman Jr. was crowned the Hammer Sportsman champion on the evening. For Lineman, it was his third career NES Track title after winning it previously in 2013 and 2016.

Like VanHorn, Kyle Kania won the 2018 Crate Modified championship with out winning a feature event. Kania announced on Saturday night that he intends on moving up to the Modified ranks at New Egypt Speedway in 2019.

Jon Meyer picked up his first career Street Stock title in 2018 after just a few seasons of racing. He indicated that he would be back to defend his title again in 2019.

Joe Garey Sr. will go down in the history books as New Egypt Speedway’s first ever 4-Cylinder track champion. Garey will also be back to defend his title in 2019.

New Egypt Speedway is scheduled to open up its gates for the first time next weekend, March 23rd with the March Meltdown that will pay $5,000 to win for the Modifieds, which will be run under Short Track Super Series South rules, with Sail Panels. The Crate vs. Sportsman will also be on the card paying $1,000 to win and $100 to start. Pit gates will open at 10AM for early tech inspection, Grandstands will open at 2PM with Hot Laps scheduled for 3PM and racing at 4PM. Adult admission is $25, Seniors (65+) are $23, Teens (12-15) & Military w/ID are $15, with Kids 11 & FREE!

“New Jersey’s Premier Dirt Track Facility”, New Egypt Speedway is located on Route 539 in New Egypt, NJ just minutes from Six Flags Great Adventure and the New Jersey Turnpike. A racy 7/16-mile D-shaped dirt oval, New Egypt Speedway serves Garden State race fans with some of the best competition in the country. New Egypt’s state-of-the-art facilities feature daylight-quality lighting and excellent sightlines from any seat in the house. The grandstands are fully wheelchair accessible with wide, clear, and well-groomed walkways. Concession facilities serve up everything from Jersey Burgers to ice cream treats at family-friendly prices.
For more information on New Egypt Speedway, visit online: www.newegyptspeedway.net, “Like” us on Facebook at www.facebook.com/newegyptspeedwayofficial, or follow us on Twitter @nesspeedway. 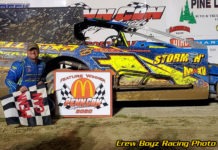 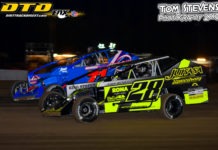