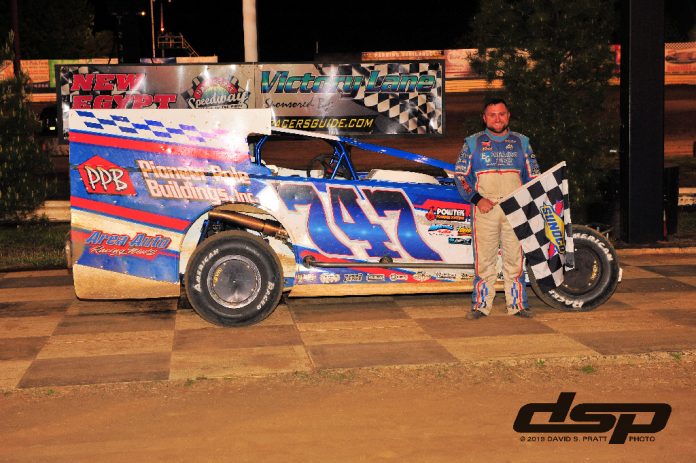 NEW EGYPT, NJ –  Davey Sammons of Bordentown, NJ captured his first Modified feature event of his career Saturday night at New Egypt Speedway. Sammons won his heat race and then led all 30 laps of the main event in front of car owner John Chemidlin who was in attendance despite still recovering from a neck injury.

“I am very happy to be able to do this in front of John (Chemidlin)’, stated an elated Sammons, “We have had a strong car this year but haven’t been able to put it all together until tonight!”

Sammons and John Packenham brought the 22-car field to the green flag with Sammons quickly leading the way with Bryan Kuhl immediately getting the runner-up spot and giving chase. These two drivers set the pace in the opening laps with Kuhl edging closer just before halfway while Brandon Grosso charged to the front from his 11th starting position. Grosso and 14th starter Billy Pauch Jr. were 4th and 5th and putting the pressure on third place Rich Rutski. As the second half of the race unfolded Sammons used his 410 sprint car experience to increase his advantage while lapping several cars. As Sammons approached heavy lapped traffic at the back of the field, the first yellow of the event for a three car tangle just ahead of the leader slowed the pace with just 6 laps remaining in the 30 lap affair. After running 1 lap and seeing a second caution appear, the field was set for what would be the final restart, now single file as only 5 laps remained. The final 5 laps saw Sammons remain in control as his very strong #747 was just too much for the rest of the field. Grosso, who had dropped back to fifth for the last restart, decided to try the far outside of the speedway over the final 5 laps and it paid off as he raced to a second place finish. Kuhl held on for a solid third, as Pauch Jr. and Rutski rounded out the top five.

The Crate Modified feature also had a first time career winner as young hot shoe George Garies Jr. claimed his first win in the 20 lap event. Joe Toth put the pressure on over the last couple of laps but Garies held him off for the popular victory. Toth settled for second, and Tom Princiotta with an excellent drive came home third. Point leader Ryan Simmons crossed the line fourth while Dan Fleming rounded out the top five.

Next Sat. night May 11th is Bordentown/Chesterfield night at New Egypt Speedway as all residents of the two towns will get in for free with proof of residency. The Vahlco Wheels Modifieds will once again headline the show, joined by the Larry’s Hot Rods and Harley’s Northeast Wingless Sprints, Hammer Sportsman, Lyons Construction/MetalFab Rookie Sportsman & the Street Stocks. Gates will open at 4pm, with the first race taking place at 6pm. 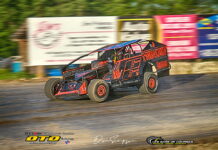