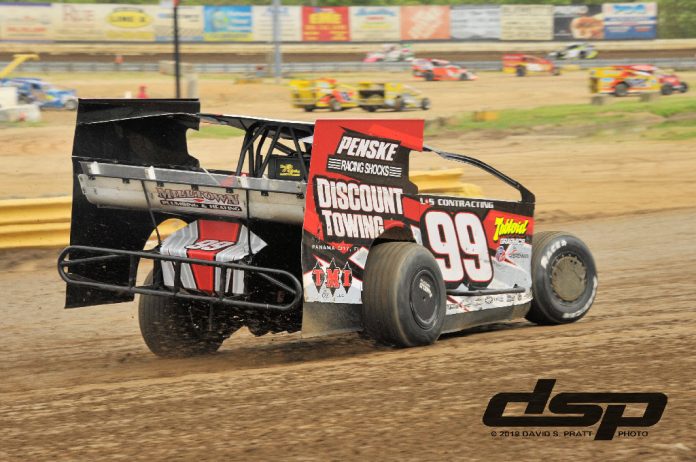 As the 30-lap Vahlco Wheel Modified feature began, outside polesitter Brian Papiez sprinted out to the front. After a quartet of caution periods and six tours recorded, Papiez was still on top with TJ Lilly, fourteenth place starter Billy Pauch Jr. and PJ Oliver next in line. By lap ten, Papiez had built a solid advantage over Lilly and Pauch Jr. with Danny Bouc advancing into fourth and Oliver falling back into fifth. At the halfway point, Papiez’s margin was nearly a full-straightaway over Lilly, Pauch Jr., Bouc and David VanHorn. With seven circuits remaining, Papiez was beginning to approach the tail end of the field with Lilly and Pauch Jr. dueling for second. On lap twenty-six, Pauch Jr. swung by Lilly to gain second place. Over the final revolutions, Papiez continued his torrid pace to grab his second win of the season. Pauch Jr. captured the runner-up position. Bouc and VanHorn were able to pass Lilly as well in the closing laps to finish third and fourth respectively. Lilly finished in fifth. Cale Ross, Brian Papiez and Danny Bouc were victors in the Vahlco Wheels Modified heat races.

In the rain shortened Hammer Sportsman feature, JT Trstensky was declared the winner of the 12-lap affair. Ryan Heim crossed the line finish line first but his car failed to make the minimum weight. The victory was the second of Trstensky’s career. David Burns took second place. Will Trstensky, Steve Davis and Joseph Brown filled out the top five. Jason Kosch and Art Liedl won the Hammer Sportsman heat races.

Jon Meyer passed Bill Liedtka with five circuits remaining and led the remaining distance to grab the victory in the 15-lap Street Stock race. The win was the second in a row for Meyer. With Liedtka taking second, Vern McLaughlin came home in third. Billy Wroble and Brian Ludwig rounded out the top five.

On Saturday, May 18, Jeep Night rides into New Egypt Speedway. Jeep owners will be admitted to the main grandstand for half-price and can participate in a Jeep show and parade. On the track, the Vahlco Wheels Modifieds, Larry’s Hot Rods & Harley’s Northeast Wingless Sprint Cars, Crate Modifieds, Mike’s Performance 4-Cylinders and the Lyons Construction/Metal Fab Rookie Sportsman will be in competition. The pit gates swing open at 3:00 p.m. and the grandstand ticket window opens at 4:00 p.m. Hot laps start at 5:00 p.m. with the first green flag waving at 6:00 p.m. Admission to the grandstand is $20 for adults, $18 for seniors 65 and older, $10 for teens 12-15, $10 for military personal and their spouses with ID, and Kids 11 & under are FREE. Pit admission is $30 with a New Egypt Speedway license and $40 without.