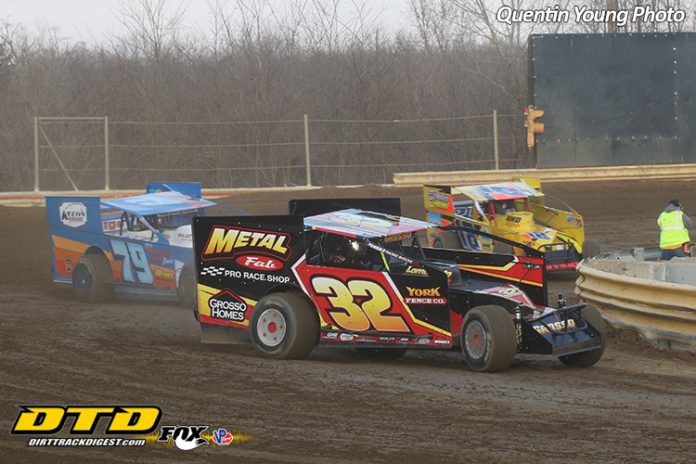 Blaine Bracelin jumped out to the early lead and would lead the first five laps of the Modified feature with Danny Bouc in tow after getting to the second position on lap two with Brandon Grosso following him up through the field. Grosso would wrestle the lead away from Bracelin on a lap five restart with Bouc now in second followed closely by Billy Pauch Jr. and last week’s winner David Van Horn. Pauch Jr. would move in to the runner-up spot on lap six and began to chase down Grosso. Pauch Jr. would officially lead lap nine by a bumper over Grosso with an outside pass but a yellow would fall negating the pass before the field was past the stripe handing the lead back to Grosso. On the ensuing restart Grosso would take the outside lane and pulled away to a five-car length lead over Pauch Jr. The field would encounter lapped traffic at the halfway mark, as Brandon Grosso’s lead would fluctuate as they diced through the back of the field. Finally with just three laps to go Pauch Jr. would shrink the lead to just a couple car lengths closing even more with two to go, but it would be to no avail as Brandon Grosso would take the win by just two car lengths over Pauch Jr. David VanHorn would come home third with Danny Bouc and Davey Sammons rounding out the top five.

“On that restart I picked the top after he was trying to play games, I just had to play some of my own games and I got away from him and that was it”, said Grosso post race. “These guys that race here are tough no matter where you start, its tough to beat these guys. Once I got the lead I felt comfortable up top so I just stayed there.”

Ryan Simmons was the eventual winner of the 30-lap Mr. Crate Classic after Steve Davis took the checkered flag first but was found illegal in post-race tech inspection. The $750 victory was Simmons’ second win of the 2019 season after picking up the win on opening night. Jeremy Martino, Steve Hicks, Eric Palmer and Anthony Tramontana Jr. completed the top five,

“Ill take it, I’m happy to be here and we did it the right way”, spoke Simmons after the races.


Rich Mellor picked up his sixth Larry’s Hot Rods and Harley’s Northeast Wingless Sprint Car win of 2019 on Saturday after an epic battle at the front of the field throughout the closing laps of the event. Brian Spencer would come home second for the second straight week, Larry Drake, Duane Nixon and Brad Schaale were the rest of the top five.

New Egypt Speedway is back in action next Saturday night August 10th with Toms River Township night. All Toms River and area township residents will be admitted free in to the grandstands with proof of residency. The Vahlco Wheels Modifieds will be the headlining division. The Mid Atlantic 305 Sprint Cars will make their final 2019 NES stop next Saturday as well. The Hammer Sportsman and Street Stocks will round out the racing card.