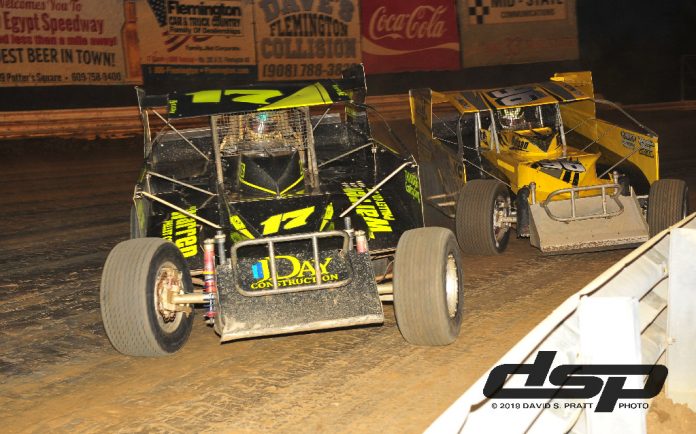 “We finally got one!” quipped a visibly relieved Pauch Jr. in victory lane, “We had a very good car tonight. These past two weeks are probably the toughest I have ever had racing and I was really down on myself, but we pushed thru and I am really proud of this whole team. This was a much needed win”

Cale Ross, who ran away and hid in his heat race victory, looked to repeat that performance at the start of the 30 lap feature event. Ross with Blaine Bracelin in tow pulled away from the rest of the field when the yellow was quickly displayed with two laps in the books when Kevin Vaclavicek spun in turn 3 and Tuesday night’s winner David Van Horn slammed into him. Despite the heavy contact, both cars were able to rejoin at the back of the pack for the restart which saw Pauch Jr. already up to 6th from his 10th starting slot.

Ross again dominated the restart as Bracelin gave chase and Pauch Jr. battled with hard charger Danny Bouc as the duo sliced thru the pack. Pauch Jr. won this battle and quickly caught and passed Bracelin for second on lap 7 and then set his sights on Ross, who was 10 car lengths out in front. Pauch began to pound the outside of the race track as he tracked down and was the bumper of the leader by lap 12. Pauch appeared ready to fly by the leader, however Ross had found grip on the very bottom groove of the track and would power back past the point leader on every turn. Ross thwarted Pauch’s attempts to pass at every turn for 4 consecutive laps, until lap 16 when Pauch drove the car in deep into turn 3 and powered around the leader in turn 4. Ross moved up to the outside and kept up the torrid pace just five lengths back over the remaining distance. Some brief hope came in the form of lapped traffic in the final 5 laps, but Pauch Jr. handled it like the champion he is and went on to his 25th career Modified win at New Egypt Speedway. Modified rookie Ross continued to impress with yet another strong run for second. Bracelin posted his best finish ever at NES in third. David VanHorn rallied back from that lap 2 tangle to finish 4th and Davey Sammons rounded out the top five.

Billy Liedtka scored his fifth win and 31st of his career in the 15 lap Street Stock victory. Liedtka held off Mick Search & Brian Spencer for the popular victory.

Next week Sat. night August 31st, it is New Egypt Speedway’s annual Labor Day weekend double dip, with Twin 20 lap features for the Vahlco Wheels Modifieds. Also on the card will be the Larry’s Hot Rods & Harleys NEWS Sprint Cars, the Hammer Sportsman and the Mike’s Performance Center 4-cylinders. Gates will open at 5pm, with warm-ups at 6pm and the first race starting at 7pm.

Reminder, Sept. 7th will be the John Romano Memorial 30 lap event for the Hammer Sportsman sponsored by 48Barriers.com along with G&M Dill Trucking and Amwell Auto Body. Lap sponsorships and contingency bonuses continue to come in for this must see event. Anyone interested in getting involved by sponsoring something for this event please contact Pete MacDonald at the track office (609)-758-1900.