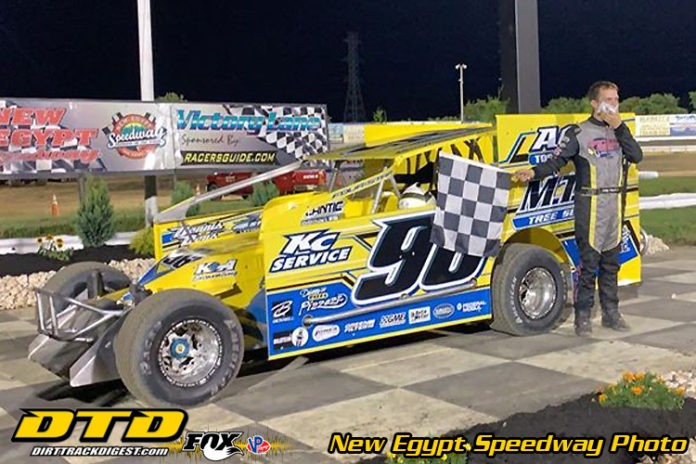 NEW EGYPT, NJ – Billy Pauch Jr. was victorious at the New Egypt Speedway in the Vahlco Wheels Modified main event on Saturday night July 11th. Exactly one week after suffering a mechanical failure while en route to an Opening Night win at NES,  Pauch Jr. earned a little bit of redemption as he inherited the lead when race long leader PJ Oliver slowed with 10 laps to go handing the lead to Pauch.

“Last week was a tough one to swallow. It’s good to be back here, this is the best we can do for the fans with everything going on. My guys gave me a great car tonight, thanks to all my sponsors, everyone who makes this thing go round,” said Pauch post-race.

Cream Ridge, NJ’s PJ Oliver led the Vahlco Wheels Modified field to the green flag for their 30-lap feature event. Oliver jumped out to the early race lead over JR Fulper and would hold a steady lead until a caution flew for Bryan Kuhl who came to a stop just short of the pit exit ramp.

When racing resumed, Oliver continued to lead, this time with a new challenger in tow in the form of Billy Pauch Jr. who had charged forward from his seventh starting position. Holding a steady lead, Oliver would seemingly pull away from Pauch Jr. on the straightaways while Pauch Jr. would inch closer and closer to the back bumper of Oliver’s machine each time they entered the corner.

The second yellow of the event would fly on lap 14 when Dominick Buffalino came to a stop just short of the fourth turn entrance ramp.

Oliver would again jump out to the lead and seemingly had his second career New Egypt Speedway Modified win in hand when he suddenly slowed with driveline issues exiting turn two on lap 20 handing the lead to Pauch who now had Mike Butler in tow who had rallied from the eighth starting position.

John McClelland would bring out the yellow on lap 24 as he came to a stop in turn four.

On the ensuing restart, second place running Butler would get sideways in front of the field and ended up collecting Frank Cozze and Billy Osmun III, ending the night for both drivers. Butler who did not stop during the incident was given his second spot back for the restart.

When the field was brought back to green Pat Wall endured a vicious flip in between turns one and two flipping multiple times displaying the red flag. Wall was ok and would exit the car under his own power.

With just six laps to go now, Pauch Jr. retained his lead on the restart and would drive off to his first win of the season at the New Egypt Speedway. Mike Butler would be the runner up with 12th place starter Ryan Krachun coming home third. Brandon Grosso and JR Fulper completed the top five.

Jim Housworth took the early race lead from Will Dupree and controlled the rest of the distance winning the 20-lap Sportsman main event. Housworth was followed across the stripe by Bob Lineman Jr., David Burns, Joseph Brown and early race leader Will Dupree.

Tim Tanner Jr. was the victor for the invading Mid Atlantic Sprint Series, Tanner would duel with pole sitter Mike Haggenbottom early on in the event but would eventually pull away to victory. Following Tanner to the finish was Kevin Nagy, Jeff Geiges, Mike Haggenbottom and Mark Bitner.

In Street Stock action, Bill Liedkta made an outside pass on race long leader Shanon Mongeau and parlayed that into another victory at the Ocean County D-Shaped oval, adding to his division leading win total. Mongeau rallied back after a right front flat tire to finish second with Rich Stinson finishing third, Spider Ensinger Sr. fourth and Brian Ludwig fifth.

New Egypt Speedway is back in action this coming Saturday night July 18th with the 4th Annual Mr. Crate Classic. The Ice Less LLC Crate Modifieds will be the headliner with a 30-lap main event paying $750 to the winner. The Larry’s Hot Rods & Harley’s Northeast Wingless Sprint Cars Presented by: The Meat Shoppe will also be in action along with the Sportsman, 4-Cylinders and Lyons Construction/Metal Fab Rookie Sportsman.

Anyone with any questions about this Saturday night’s events can contact the New Egypt Speedway office at 609-758-1900 or via e-mail at nesoffice@comcast.net.