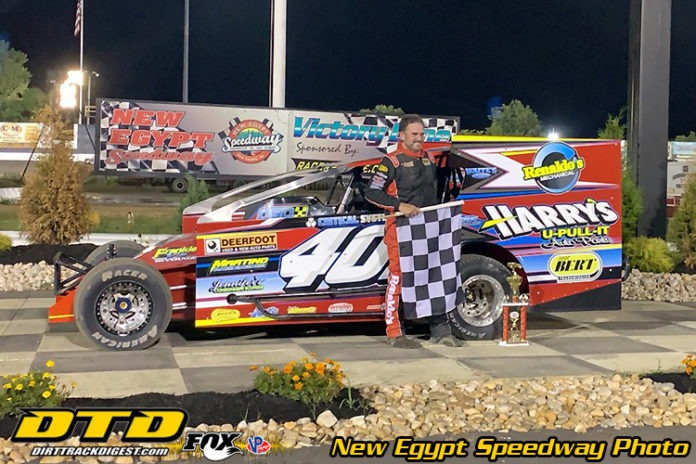 Steve Davis led the Vahlco Wheels Modified field to the green-flag but it would be Kory Fleming leading lap number one. The first yellow flag of the event flew with a lap completed for Jimmy Horton in turn number four. On the restart Cozze shot to second and began to stalk Fleming for the lead. The second caution of the event flew on lap five for Matt Stangle stopping in the short shoot heading into turn three. When green replaced yellow Cozze shot to the outside of Fleming in turn one and emerged the leader on the backstretch. Debris was the cause of caution number three on lap seven.

Cozze jumped back out to the lead with a new challenger in PJ Oliver for the lead. Once out in front Cozze would maintain the lead until the yellow flew again on lap 14, this time for Cale Ross who had spun in turn one.

Again Cozze shot out to the lead on the restart, but he would then have a new second-place man in Dakota Kessler who dove to the inside of Oliver as the field entered turn one. Kessler would remain in the runner-up spot for the next six laps as now David VanHorn entered the picture as Cozze’s latest challenger.

As the laps started to wind down, Cozze would reach lapped traffic on lap 23 with VanHorn on his horse trying to catch Cozze at a frantic pace. At the two-to-go signal VanHorn appeared to be closing in on Cozze but he would run out of time as Cozze scored his first star in the New Egypt Speedway win column since September 4, 2010 and his 27th overall at the Route 539 speed plant. VanHorn would come home second with Billy Pauch Jr., Dakota Kessler and PJ Oliver completing the top five.

“It’s been a long time since we’ve been here. This has always been home, this the place I love coming to. The fans are the greatest here, I think,” said Cozze post race. “It feels good to finally have the monkey off our back. I gotta thank Dave Renaldo, we’ve had a rough couple weeks and he’s gotten us everything we need. I can’t thank the guys on my team, they all worked so hard. It was a good win tonight.

Mark Bitner led wire-to-wire in USAC East Coast Sprint Car competition but it would not come as easy as that sounded. Bitner led the field to the green but before a lap would be completed JR Berry would spin in turn number three. When the green flag flew again, Bitner jumped back out to the lead with the best battle on the speedway being for second between Kyle Lick, Ryan Watt and Chris Allen Jr. Allen would rim-ride his way to second and begin his chase of Bitner who now was roughly a half a straightaway out in front.

With Bitner now entering lapped traffic on lap 15, that allowed Allen to close up right to the tail tank of Bitner as the two weaved in and out of lapped traffic all while battling for the race lead. Entering turn three Allen threw his No. 71 machine hard into the corner trying to drive around Bitner but he was not able to make it stick and slipped up the race track allowing Bitner to pull back away. The yellow flag flew for the final time on lap 23 when David Swanson came to a stop in turns one and two setting up a green-white-checkered finish. When racing resumed Allen threw everything he had at Bitner but it would be to no avail as Bitner picked up the win at what is considered to be his “home track” Allen would be the runner-up followed by Ryan Watt, a hard charging Billy Pauch Jr. and defending USAC East Coast Sprint Car champion Steven Drevicki.

Howie Finch picked up his first career Sportsman win aboard his Ice Less LLC No. 4 machine and the first for a 604 Crate Motor. Finch took over the lead from race long leader Jimmy Amato and never looked back. Ryan Heim would finish second followed by Dan Fleming in third who utilized a 602 Crate, David Burns and Joseph Brown.

Shanon Mongeau was the victor in the Street Stock event, he was followed to the stripe by Bill Liedtka, Brian Ludwig, Spider Ensinger Sr. and Sean Wall.

New Egypt Speedway returns to action next Saturday night August 15th with Ladies Night. All ladies will receive ½ price general admission. In action will be the Vahlco Wheels Modifieds, Sportsman, Ice Less LLC Crate Modifieds, Street Stocks and the Lyons Construction/Metal Fab Rookie Sportsman. Plus, there will be Powder Puff races held at the end of the night for the ladies.