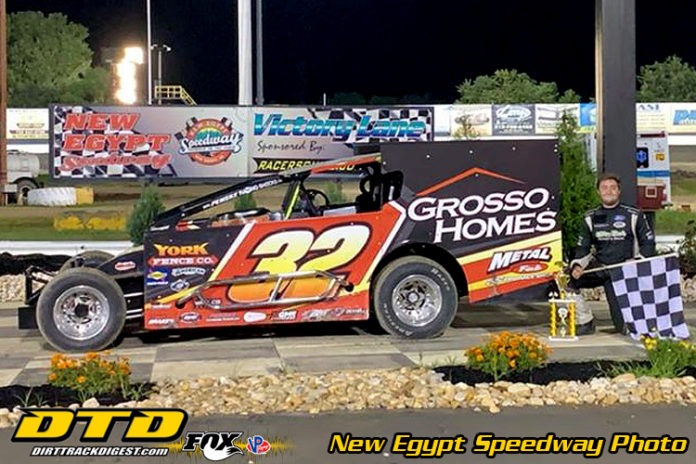 NEW EGYPT, NJ – Brandon Grosso of Belle Mead, NJ became the sixth different Vahlco Wheels Modified feature winner in as many races on Ladies night at New Egypt Speedway. Grosso had a comfortable lead when his engine began to lose power in the final laps, allowing runner-up Steve Davis one final shot at him on the final turn, but his motor had one last gasp in it which was just enough to drive back under Davis and beat him to the line by half a car length. The engine then expired heading into turn one requiring a push truck to take him to victory lane.

“The car was great all night until three laps to go, when I felt it start to lose power,” a relieved Grosso related in victory lane, “Fortunately it had just enough to get me back by him (Davis).”

Steve Davis led the field at the drop of the green as third starting Grosso battled with Kory Fleming and Cale Ross battling hard for second. This became a good four car battle for the lead as Davis fell back and then drove back by two cars and retook the lead. The first yellow appeared on lap three which saw Fleming and last week’s winner Frank Cozze both requiring wrecker service. On the restart Grosso shook the other challengers and closed in on Davis for the lead. This duo then put on a crowd pleasing duel as they raced side by side for the lead for 5 laps before Grosso finally moved in front. Once in front Grosso moved out to an 8 car length lead as he and Davis drove away from the pack, which saw many good battles going on from third thru 12th. At this point young Dakota Kessler wrestled third away from a persistent Ryan Krachun and slowly began running down the two leaders. Lapped traffic began to come into play in the final 10 laps but Grosso masterfully sliced thru keeping his advantage as Krachun and 23rd starting Billy Pauch Jr. caught up to Kessler to battle for third. After a long green flag run, the caution came on with just 8 laps remaining closing the field up for a final run to the checkered. Grosso sailed out in front once more as defending champ Pauch Jr. moved to third and began applying the pressure to Davis for second. Grosso seemed to have things well in hand until his motor began going sour with three to go. Going into turn three the final time Davis caught Grosso and executed a perfect Sprint/style slide job for the lead, but Grosso kept his cool steering back under him exiting turn four and his motor responded with just enough power to beat Davis to the stripe by half a car length for his fifth career win. Pauch had a ring-side seat for this battle as he pushed the duo across the line settling for third, advancing 20 positions after replacing the entire rear during intermission. Dakota Kessler continues to turn heads with his third top five finish in six races. Ryan Krachun continued his streak of all top ten finishes this year as he rounded out the top five.

Matt Miller won his second career feature in the Ice Less Crate Modified division as he led all 20 laps. It sounds much easier than it was as he had to hold off 3-time champion Eric Palmer and red-hot Jim Housworth, who finished second and third respectively. DJ Hunt and Steve Hicks had strong runs rounding out the top five in another highly competitive feature for the large field of 35 entries.

Point leader David Burns, who had not finished outside the top four this year, finally posted his first win of 2020. Burns drove under 3 time winner Jim Housworth and Matt Ellery as they battled for the lead, and drove away to the victory. Housworth settled for second posting two top three finishes on the night as he did double duty racing both this car and his Crate car. Ellery came home third followed by Will Dupree and Joseph Brown.

The Street Stock 15 lap feature saw Bill Liedtka win for the 35th time in his career. For the first his team swept the top two spots as veteran Larry Reed wheeled Liedtka’s back-up car to a second place finish. For the fourth time in four races Brian Ludwig finishes third and takes over the division point lead.

Next week, Sat. night August 22nd, the Vahlco Wheels Modifieds will compete in the first annual Ron John Koczon Classic, honoring the former 5-time winner and 2000 Sportsman champion. In breaking news, the feature will now be a 77-lap $7700 to win event paying $370 to start!! The Ice Less Crate Modifieds will underscore the card with their own 27 lap affair paying a cool $1000 to win & the 4-cylinders will run 20 laps for $500 to win. Pit Gates open at 4pm, Grandstand gates will open at 5pm, warm-ups for all divisions start at 6pm and the first race gets the green flag at 7pm. It is sure to be a special night of racing.