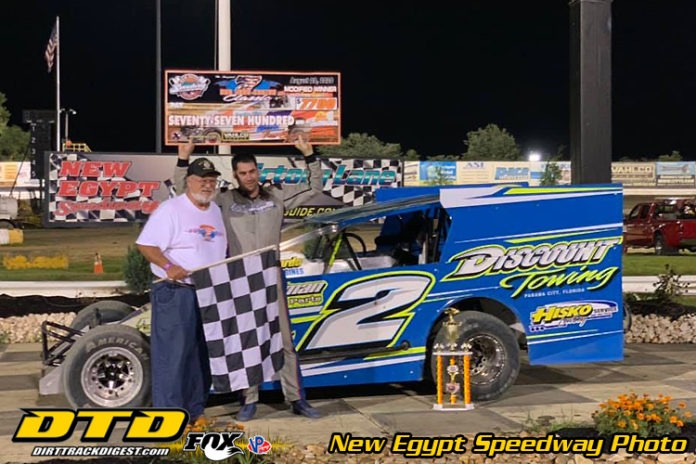 NEW EGYPT, NJ – Morganville, NJ’s Dominick Buffalino scored one of the richest wins in his Dirt Modified career on Saturday night at the New Egypt Speedway in the inaugural Ron John Koczon Classic. The 77-lap Modified event held in memory of the former NES Modified campaigner who lost his battle with cancer in April was worth $7,700 to Buffalino. It was Buffalino’s second win of the 2020 season at New Egypt Speedway.

“I raced with Ron John, way back at East Windsor and everywhere, he was one of the nicest guys you’ll ever meet. He was a good guy to race with. There are some people you like to race with and there are some you don’t. He was definitely one of the guys you liked to race,” said Buffalino post race.

Sam Martz led the 26-car Modified field to the green flag and jumped out to lead the first five circuits of the 77-lap affair. After winning his heat race earlier in the night Jimmy Blewett would take the lead from Martz and set sail insearch of the Koczon Classic victory with Dominick Buffalino in tow, both utilizing Big Block power plants under the hood. Throughout the first stretch of the event it looked like Blewett and Buffalino were the class of the field with Mike Butler utilizing his spec-358 motor in the event entering the top three on lap 21.

Blewett would continue to lead the way through the first 23 laps when the first caution flew of the race for Lee Taylor Jr. who stopped the Moran No. 61m on the frontstretch.

On the restart, Blewett would continue to lead the way with Buffalino and Butler trying to chase him down and Ryan Krachun and Dakota Kessler entering the top five.


At lap 40 the second and final caution flew of the event for a fuel stop so that the teams utilizing Methanol had a chance to complete the duration of the event.

When the race restarted Blewett continued his dominance over Buffalino, Butler and Krachun with Davey Sammons now entering the top five as the race went on.

Over the last 20 laps, Blewett and Buffalino put on a show for the ages, battling it out for the lead lap after lap side by side all while weaving their way in and out of lapped traffic.

Unfortunately, disaster would strike for Blewett as he would break a fuel pump belt while leading with just three laps remaining, handing the lead and the win over to Buffalino. Mike Butler continued his stellar 2020 season at NES with a second place finish with Ryan Krachun, Davey Sammons and New York invader Mike Mahaney completing the top five.

“We knew we had something good. He (Blewett) had me, I don’t know what broke. I was trying to stay with him. I think it was a little too close because when he broke, he got hit when he checked up. I feel bad for Jimmy, He was pretty good tonight. I hate to see him break but $7,700 is pretty good. I couldn’t do this without Todd (Neiheiser), he’s been in Florida since last September. I just wanna thank him for everything he does for me.” said Buffalino after the event. Buffalino ran his car so hard trying to catch Blewett it had started to overheat to the point he had to leave it running during Victory Lane ceremonies.

The Ice Less LLC Crate Modifieds were also on the program in a 27-lap main event paying $1,000 to the winner. Johnny Bangs took the lead from race long leader Justin Grosso on the last lap to score the victory. Grosso would have his best run to date in a Crate Modified finishing second with Ryan Simmons, Dan Fleming and Ryan Heim rounding out the top five.

The night was kicked off with a very special ceremony honoring “The New Egypt Nice Guy” Ron John Koczon, every driver in the pit area came out to the frontstretch to meet with members of the Koczon family including Ron John’s dad, Ron Koczon.

New Egypt Speedway is back in action this coming Saturday night August 2nd with the 2nd Annual Double Dip for the Vahlco Wheels Modifieds. The Modifieds will compete in Twin-20 lap feature events. The Larrys Hot Rods & Harley’s Northeast Wingless Sprint Cars presented by the Meat Shoppe, Sportsman, 4-Cylinders and Lyons Construction/Metal Fab Rookie Sportsman will complete the racing card. Adult (16+) admission will be $23, Seniors (65+) are $20 with Teens (12-15) & Military w/ID being $13 to get in with Kids 11 & Under being FREE! Pit gates will open at 4pm with the grandstands opening at 5pm. Hot laps will hit the Speedway at 6pm with the first race of the night firing off at 7pm.