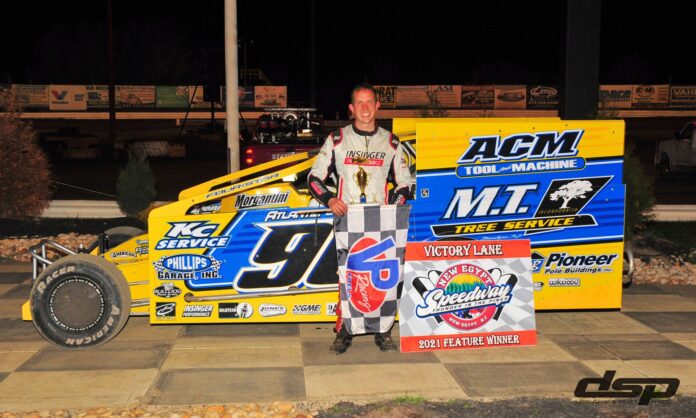 “We got lucky in turn 4 ealy in race when I was able to miss that wreck and picked up about 8 spots!” laughed Pauch in victory lane, “My crew did a heck of a job getting the car turned around after we struggled in our heat race.”

JR Fulper and Dakota Kessler brought the 24 car field to the initial green with Fulper powering out in front. Seventh starter Mike Butler, who struggled in the opener last week, was hooked up on this night as he wasted no time getting thru traffic and was quickly challenging Fulper for the top spot. Butler quickly got to the lead as Davey Sammons and tenth starter Mike Gular were now making their presence known. Sammons while running third got crossed up coming out of turn 4 but got a huge break when the car behind him straightened him out and he was able to stay up front while 8 cars brought out the yellow, shaking up the top ten running order. Butler charged back in front on the restart with Pauch making some bold moves to take over second and zero in on Butler. A lap 12 restart was what Pauch needed to assume command and drive away. Rick Laubach, who started 18th, raced into second during the final 10 laps and was able to close the gap slightly, but without a caution was unable to get close enough to challenge for the win. Laubach settled for second, followed by a fast closing Sammons, early leader Butler and “Showtime” Jimmy Blewett.

The Sportsman 20 lap feature was won by David Burns. Burns took the lead from young Justin Grosso on lap 7 and recorded the victory. Grosso, Will Dupree, Ryan Simmons and Tom Princiotta rounded out the top five.

The Lyons Construction/MetalFab Rookie feature saw Emily Fleming record her first ever win, only to lose it afterward for a technical infraction. This gave the win to Adam Buchel, which is his second in as many events. Brandon Shipley and Sarah Napora were recorded second and third in the final official rundown.

The Street Stock 15 lap feature saw Rob Ormsbee win his first ever Street stock event. Ormsbee, who is the track’s All-time winningest driver in the former Super Stock class, came from last starting position to win. He was chased across the line by Lee Allen & the defending champion Brian Ludwig.

Next Saturday night April 17th the Vahlco Wheels Modifieds will once again headline the show on Truck Night at New Egypt Speedway. They will be joined by the Racersguide.com Crate Modifieds, The Larry’s Hot Rods and Harley’s Northeast Wingless Sprints, the John Blewett Inc. 4-Cylinders and the Lyons Construction/MetalFab Rookie Sportsman.. Gates will open at 4pm, with warm-ups at 5pm and the first race taking the green at 6pm.