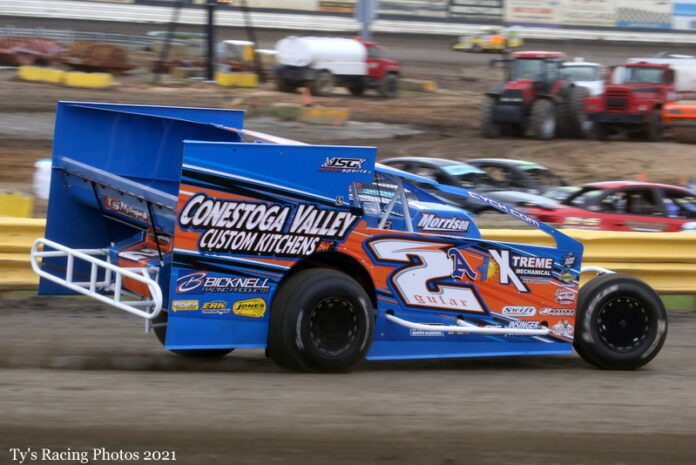 NEW EGPYT, NJ – In just his third start as a NES regular, Mike Gular of Boyertown, PA won his first ever Vahlco Wheels Modified feature event at New Egypt Speedway Saturday night. Gular, who also won his heat, made it a clean sweep of the evening when he passed Brandon Grosso in the latter stages of the 30 lap event and went on to claim the victory.

“We decided to run New Egypt this year because we like new challenges”, stated Gular to track announcer Nick Leach, “Terry (Fasnacht) gives us great equipment and I am happy we were able to break thru so quickly.”

Frank Venezia & Kory Fleming brought the 26 car field to the start with Fleming assuming command. Fleming opened up a comfortable lead in the early going with PJ Oliver and John McClelland battling with Venezia for second. Tenth starter Brandon Grosso was the fastest car in the early going as he wasted no time slicing his way into the top five and quickly began to pick off cars each lap. By lap 6 he had taken over second and quickly reeled in the speedy Fleming, with Fleming leading the duo away from the pack. Meanwhile Gular was getting faster as he took over third from Oliver but found himself more than half a straightaway behind the two leaders. However it only took Gular 5 laps to run them down and make it a three car race for the lead. Grosso, feeling the pressure from Gular, finally made a move past Fleming, and Gular followed him by the next time around. It was now a crowd pleaser as Gular looked for a way by with Grosso holding him off at every turn. Gular finally found the line he was looking for flying around Grosso for the lead.  With just five laps remaining heavy lapped traffic loomed just ahead of Gular, and as he approached it the following lap, two of those cars tangled directly in front him.  Gular took quick evasive action darting out to the fence in turn four and barely missing the incident thus retaining his lead as the yellow lights flashed on for the final time.  This final restart gave Grosso renewed hope, but Gular proved to be too much to handle on this night as he went on to win by 1.9 seconds. Grosso, who has been fast in every event so far this season, settled for a hard earned second. First heat winner PJ Oliver finally put things together to come home third, chased by last week’s winner Billy Pauch Jr. and early leader Fleming, placing all three heat winners in the top five at the finish.

The Lyons Construction/MetalFab Rookie feature saw Adam Buchel make it 3 for 3 so far in 2021. Buchel grabbed the lead from Sarah Napora on lap 5, with Napora chasing Buchel across the finish for her best finish. Brandon Shipley again was at the front posting another top three finish.

Next Saturday night April 24th the MASS 305 Winged-Sprint cars will be in action on Bike Night at New Egypt Speedway. They will be joined by the Racersguide.com Crate Modifieds, the Open Sportsman, Street Stocks and the Lyons Construction/MetalFab Rookie Sportsman.  Gates will open at 4pm, with warm-ups at 5pm and the first race taking the green at 6pm.