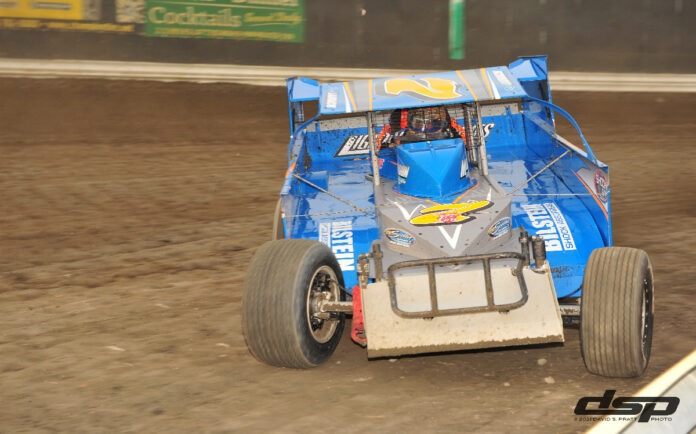 NEW EGYPT, NJ – Rick Laubach of Hellertown, PA took top honors Saturday night in the 30 lap Vahlco Wheels Modified main event on Rat Rod/Hot Rod Night at NES. The two time champ took full advantage of his front row starting spot to lead all 30 laps of the feature, the final 25 being run non-stop. It was the 17th win of his career at NES, his first in almost 5 years.

“A lot of people have asked me why I came back to run here (NES) because the competition is so tough, there are 6 STSS winners that compete here regularly!” stated Laubach in the winner’s circle, “My answer is because I enjoy running here, It’s a great track to pass on and you can be proud when you are standing here at the end of the night.”

Laubach, after a forgettable last three weeks, started on the pole for the 30 lap event and brought the field to the start. After a couple yellows in the opening five laps, including one on the initial start, the race would get going and would not be stopped again. Laubach jumped out in front and quickly stretched his lead to a full straightaway by the halfway mark. Back in the pack, Billy Pauch Jr who won the last event here on May 15, and Mike Gular, also a winner in April, were storming to the front. Gular made a great move to get by Pauch and Mike Butler to move into second only to see Pauch Jr. return the favor with ten to go. The final 8 laps saw Laubach move into and thru heavy lapped traffic bring Pauch Jr. closer, but Laubach masterfully handled the back markers and cruised to his first win since 2016 at New Egypt. Pauch Jr. settled for the runner-up spot, and Gular came home third and by virtue of this take’s over the division point lead. Mike Butler held on for his second 4th place finish this year, and Bryan Kuhl grabbed fifth from Jim Housworth on the final lap to complete the top five.

Tom Princiotta, of Columbus, NJ, broke thru for his first ever victory in the Sportsman 20 lap main event. Since he started running these cars in 2015, Princiotta has been very close on numerous occasions, but had never cracked the win column. That all changed on Saturday night as he used his Brandon Solarski Racing #32 Crate to dominate the second half of the race. After a good battle with Paul Mancini during the first half, he pulled away to a big lead in the second half only to have a late race yellow bring the field back to him. However, on this evening he would not be denied, as he once again pulled away from all competitors to post the very popular victory. Two time winner Anthony Tramontana came home a distant second, followed by Ryan Heim third, Ryan Simmons fourth and Justin Grosso fifth.


The Larry’s Hot Rods and Harley’s feature was won by opening night winner Mick D’Agastino. D’Agastino had the crowd on their feet as he battled in close quarters with fan favorite Heidi Hedin for second while young Shea Wills led the field. This went on for the first 12 laps of the event, until Wills got over the cushion in turn 2 and touched the fence. This allowed the duo to charge by and it became a battle for the lead. A lap later Wills spun with two other cars to bring out the caution, and D’Agastino took control on the restart and went on to his second win of the season and his career. He now takes over the point lead once again as he breaks his three way tie at the top with Rich Mellor and Brian Spencer. Hedin drove a great race and came home second, chased by Mellor, Larry Drake and Al Cheney.

The Lyons Construction/MetalFab Rookie feature saw Matt Dealaman win for the first time in just his fifth start. Brandon Shipley, who had won 3 of the last 4 races, settled for second, followed by Adam Buchel who finished out of the top two for the first time in all 7 Rookie races this year. Buchel’s point advantage now is just 6 points over Shipley with only 3 races remaining as they vye for the 2021 Rookie crown.

Defending champ Brian Ludwig won his first Street Stock feature since 2008. Ludwig bided his time, and charged into the lead after halfway and held on for the win, his first in 13 years. Rob Ormsbee, who had won all 3 features so far this year, came back from a flat to finish second, with Lee Allen a close third. Todd Dige and Joe Reid completed the top five.

Next Saturday night June 12th, It will be Neon Night at New Egypt Speedway, as all fans are urged to wear the brightest colored apparel they have. The Racersguide.com Crate Modifieds will be in action along with the NEWS wingless Sprints and the Sportsman. Also joining them on the card will be the John Blewett Inc. 4-cylinders, Street Stocks and the Lyons Construction/MetalFab Rookie Sportsman. Reminder, that we are now on Summertime hours, with the front gate opening at 5pm, hot laps at 6pm and the first race taking the green at 7pm.

Mark on your calendar Tuesday June 22nd, as that evening will be the running of the 4th annual Garden State Gunfight. The Vahlco Wheels Modifieds will run 60 laps for $6000 to win and they will be joined by the Racersguide 602 Crates which will be competing for $1000 to win in their 30 lap event. Pit Gates open at 4pm with the Grandstand opening up at 5pm. Hot laps will be at 6pm, with the first race hitting the speedway at 7pm.