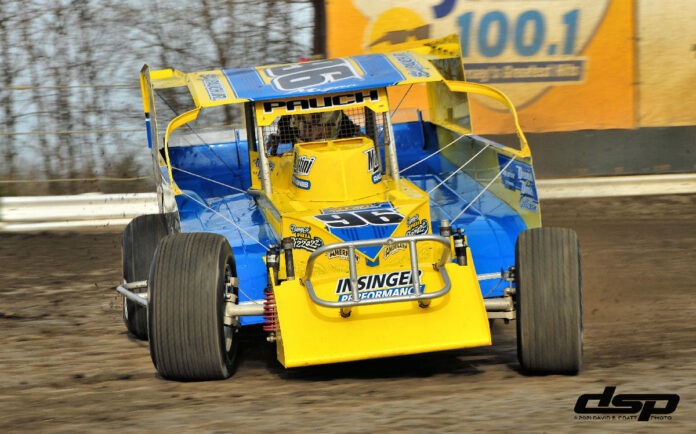 NEW EGYPT, NJ – Billy Pauch Jr. won for the second time this week at New Egypt Speedway as he captured the Graduation Night 30 lap event.  Pauch Jr. took the lead from Cale Ross on lap 17, and then held off 2018 track champ David Van Horn to win his 33rd career Modified feature at NES.

“My crew works very hard to give me a fast car every night, and this car has been really hooked up the past week,” complimented Pauch in the winner’s circle, “My hats off to the track crew, they have been working very hard on the surface here and it is better each week.”

Pauch worked his way to the front from his 14th starting position during the first 10 laps of the race and then chased Cale Ross for the lead. On lap 17 he powered by a quick Ross and took control of the 30 lap event that he would never relinquish.  David Van Horn continues to get faster every week, coming home second, chased by point leader Mike Gular who again finished third for the 3rd straight Saturday night event.  Ross held on for fourth and Brandon Grosso rounded out the top 5.

Adam Buchel was crowned the Lyons Construction/MetalFAb Pro Race Shop Rookie champ for 2021, as he won his fifth feature of the season to clinch the title.  Ricky Moran had his best finish of the season coming home second in the 12 lap affair, followed by Tommy Klimkowski third.

The MASS 305 Sprint cars raced at NES for third time this year and it was Jeff Geiges winning for the first time since 2014 as he held off the winner of the first two races and point leader Kevin Nagy. Larry McVay, Ricky DiEva and Mark Bitner completed the top five finishers.

This Saturday night July 3rd it is our Independence Day celebration at New Egypt Speedway. The Vahlco Wheels Modifieds will race in the Firecracker 40, and will be joined by the East Coast USAC 360 wingless sprint cars. The John Blewett Inc. 4-Cylinders, & Street Stocks will fill out the card. Gates will open at 5pm, with warm-ups at 6pm and the first race taking the green at 7pm.