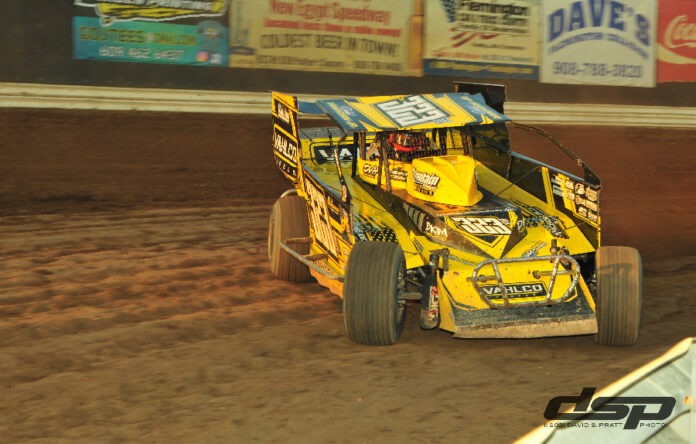 NEW EGYPT, NJ – David Van Horn captured his first Modified feature win of 2021 on Jeep Night at New Egypt Speedway on Saturday. Van Horn marched from 12th starting position, taking the lead from Louden Reimert on lap 18, and never looked back. It was the 11th victory of his career at NES.

Chris Grbac and DJ Hunt brought the field to the start of the 30-lap contest with Hunt opening up a nice half straightaway lead over the first 5 laps. Hunt withstood one restart but by lap 8 the Modified Rookie had heavy pressure coming from behind as newcomer Louden Reimert and 5-time winner Billy Pauch Jr. were making quick work of the competition behind him. It took a couple laps for Reimert to find a way by Hunt, all the while holding off Pauch. As Reimert grabbed the lead Pauch Jr. followed him by and continued to hound Reimert, now for the lead. Suddenly from seemingly out of nowhere, Van Horn burst onto the scene and raced side by side with Pauch for second. This battle was waged on Reimert’s back bumper for 4 laps, with Van Horn and Pauch trying to one up each other on every turn. Twice the duo attempted to make it three wide for the lead, but Reimert was up to each challenge. Finally on lap 18, Van Horn got a tremendous bite on the low side of turn two and shot by both Pauch and leader Reimert. Once in front DVH pulled away, as his car got faster with each passing lap. With Van Horn out in front, Pauch picked up his battle with Reimert, trying every groove over the next 10 laps to no avail. Finally as the field was shown the “two to go” signal Pauch found just enough room and squeezed by Reimert’s Fleuer #16. Van Horn cruised to the victory as Pauch Jr. earned a hard fought runner-up finish. Tenth starter Reimert settled for third, making a lot of fans at NES in the process, with his hard work and smooth driving throughout the 30 lap affair, as he got onto the podium for the first time in just his fifth start. Mike Gular, who looked to be the fastest car on the track in the opening laps, fought his way back to finish 4th, as he quickly closed on the leaders over the final five laps. Mike Butler crossed the line fifth for his second top five in the last 3 races.

Justin Grosso correctly predicted the outcome of the 20 lap Racersguide Crate Modified feature. During an interview at intermission, Justin stated that he had a lot of problems with the car since winning five in a row in May-June, but he thought they were all sorted out and that the car seemed ready to get back to victory lane. That is exactly what happened, as he raced from 11th starting spot with 12th starter Ryan Simmons to the front and then grabbed the lead from Simmons and went on to his sixth Crate win of 2021. Grosso now has ten wins at NES in 2021 when combined with his 4 Open Sportsman victories. Simmons settled for a solid second place run, chased across the line by Johnny Bangs, Paul Mancini and Tom Princiotta.

This coming weekend August 21-22, it is the Monster Truck Summer Smash on Saturday and Sunday. Saturday night gates will open at 5pm, with the show starting 7pm, and on Sunday afternoon the gates will swing open at 1pm with the show beginning at 3pm. Tickets for both shows are available online.

Racing action on the speedway will be back the following Saturday night August 28th with the 2nd annual Ron John Koczon Classic. The Modifieds will headline with the 77 lap Classic event, and will be joined by the Mid-Atlantic 305 Sprint Car Series (MASS) and the John Blewett Inc. 4-cylinders, GAtes open at 5pm, warm-ups will be at 6pm and the first race will begin at 7pm.