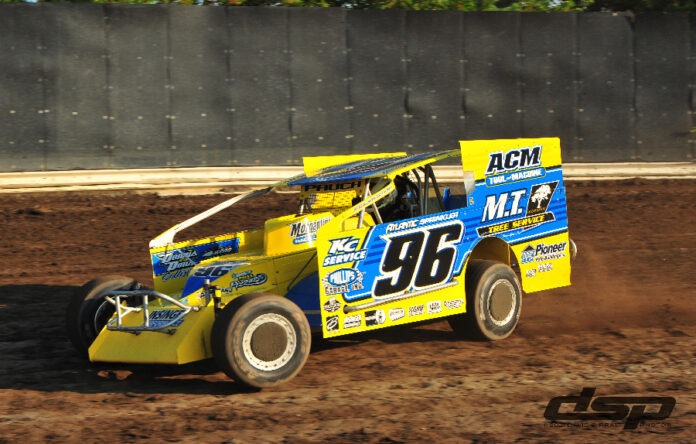 NEW EGYPT, NJ – Billy Pauch Jr. overcame a broken driveshaft in his heat race, which relegated him to start 20th in the feature, and earned his 6th win of 2021 at New Egypt Speedway Saturday Night in the Vahlco Wheels Modified 30 lap feature event. Pauch marched steadily to the front, and then took advantage of a lap 19 restart, as he wrestled the lead away from Kory Fleming and drove away to victory.

Chris Grbac and Jack Swain brought the field to the start with Grbac assuming command. Bryan Kuhl quickly charged into second and began catching the leader. As he closed in to challenge Grbac, 7th starter Kory Fleming was also charging to the front and quickly passed Kuhl and Grbac for the lead on lap 7. Fleming began to open up a comfortable lead as Kuhl moved into second and took up the chase. Meanwhile, 20th starting Pauch was already up to 8th and following a restart began to show how strong his car was becoming as the race moved on. By lap 17 Pauch had moved into third but had a lot of ground to make up on the two leaders and was having trouble closing the gap. But that changed 2 laps later as the yellow flashed on for John Aumick, who had spun in turn four. On the restart Pauch beat Kuhl into turn 1 and drove up on the outside of Fleming. Fleming was fast on this night and as Pauch past him in turn 2, Fleming came roaring back under him to hold the lead. The duo raced side-by-side for 2 laps before Pauch wrestled the lead away from him. Once in front, Pauch Jr cruised away to post the victory, the 35th of his career at NES. Cale Ross found a bite on the outside in the closing laps and took second, ahead of Rick Laubach who also made a late charge past several cars. Fleming settled for 4th with Mike Gular rounding out the top five.

The Larry’s Hot Rods and Harley’s NorthEast Wingless Sprints (NEWS) 20 lap feature was won again by point leader Rich Mellor. It was Mellor’s sixth win of the year, his 4th win in the last six races, and 17th career which is number one on the All-Time win list. The win was not easy at all for Mellor, who had Brian Spencer pressuring him the entire way waiting for a mistake that never came. Spencer settled for second, chased by Shea Wills, Mark Bitner and Mick D’Agastino.

Rob Ormsbee won the 15 lap Street Stock feature for his tenth win in 11 tries this year. This win was not at all easy for him, as he was involved in a 5 car pile-up on the first lap in turn four which left heavy body damage to his #19. Then after fighting thru the field to second place in just 7 laps, he was caught up in another wreck as leader Spider Ensinger Jr.’s car burst into flames right in front of him giving him no place ro go. Ormsbee then drove thru the field again, taking the lead from Lee Allen with 2 laps remaining for the win. Brian Ludwig finished second and Allen came home third.

Racing action on the speedway resumes again this Saturday night with first responders night. All Firefighters, EMS, Police, etc. will get half-price admission with ID. It will also be Modified Championship Night as we will crown the 2021 track Champ. The Vahlco Wheels Modifieds will headline the event, joined by the Open Sportsman and the Racersguide.com Crate Modifieds. Gates open at 4pm, warm-ups will be at 5pm and the first race will begin at 6pm.