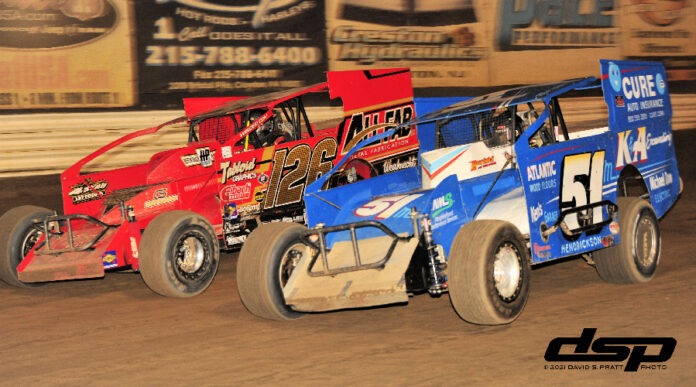 NEW EGYPT, NJ – This Saturday evening the 9th annual All-Star Cup Shootout for the Vahlco Wheels Modifieds will take place at New Egypt Speedway, and a star studded field will be on hand to compete for the $10,000 top prize.  The 100 lap event will pay $1000 for tenth and $500 to start, plus additional lap money.  Confirmed entries from across the Tri-State area have already been received, and continue to come in.

Leading the list is newly crowned New Egypt champion Mike Gular, as he will be looking to capture his first All-Star Cup title. Former track champions David Van Horn & Rick Laubach, and 2017 All-Star Cup winner Brandon Grosso plan to defend their home turf. The trio accounted for 5 feature wins this season between them at the central Jersey track. The task will not be easy as many potent invaders will be in attendance, several of which have had previous NES success.

A pair of former track champions will head up the list of confirmed drivers invading the speedway. Four-time NES champion Ryan Godown, winner of the lucrative Grandview Freedom 76 event two weeks ago, will be in the field driving the Danny Sommeling #51. The “Ringoes Rocket”, winner of this race in 2018, is currently second on New Egypt’s all time win list and will be looking for win #50 of his career at NES. 2020 champion Danny Bouc will return to his roots on Saturday with hopes of collecting the $10k prize for the second straight year. Bouc’s last victory at NES came in this race one year ago.  In addition opening night winner & last season’s Ron John Koczon Classic victor, Dominick Buffalino, will return in hopes of winning his first All-Star Cup.  The winner of the Danny Serrano 100 last weekend, he will look to capture his second 100 lap race in as many weeks.

The state of Pennsylvania will also be well represented Saturday. Two-time All-Star Cup Shootout winner Duane Howard will be on hand trying to turn last year’s runner-up finish into his third All-Star Cup victory in the Butch Getz #15G. “The Bullet” Jeff Strunk will be behind the wheel of the Zubi’s 88z as he looks to add this prestigious title to his long list of accomplishments.  Other confirmed invaders include two-time NES champ Frank Cozze, Middletown NY hotshoe Danny Creeden, 2015 NES Rookie champ Matt Stangle and young gun Jack Butler, whose retired dad Gary won the first ever All-Star Cup back in 2013.

New Egypt’s 2021 feature winners Cale Ross & John McClelland, along with a host of NES top competitors like Mike Butler, Wade Hendrickson, Bryan Kuhl, Davey Sammons, & Louden Reimert, will all be competing to keep the big money at home.  Numerous other drivers have expressed interest in attending and it is sure to be a stout field when the green flag drops Saturday.


The All-Star Cup weekend will kick-off on Friday eve Oct. 1. The Modifieds are invited to come & practice during Friday’s event, in preparation for their big race on Saturday. The driver turning the fastest lap during Friday’s Modified Practice session will earn an automatic redraw spot in Saturday’s 100 lap event!

The Racersguide.com Crate Modified Underdog 20 (for all Crate non-winners in 2021) & the “Top Dog Dash” (for this year’s Crate feature winners) will headline Friday’s action.  They will be joined on the card by the Open Sportsman, Street Stocks and the Vintage Cars.  Gates open Friday for the grandstand at 5pm, with Warm-ups at 6pm & racing getting underway at 7pm.

Saturday Oct. 2nd it’s the 100 lap All-Star Cup Shootout for the Vahlco Wheels Modifieds paying $10,000 to win, $1000 for tenth and $500 to start, along with the Racersguide Crate Modified 25-lap event paying $1000 to win/$100 to start. The Larry’s Hot Rods and Harley’s NEWS wingless Sprints and the 4-Cylinders will also be in action. Pit Gates will open at 3pm, Grandstands at 4pm, Hot Laps for all divisions will start at 5pm, and racing gets underway at 6pm.  For more info please visit the speedway’s website at www.newegyptspeedway.net