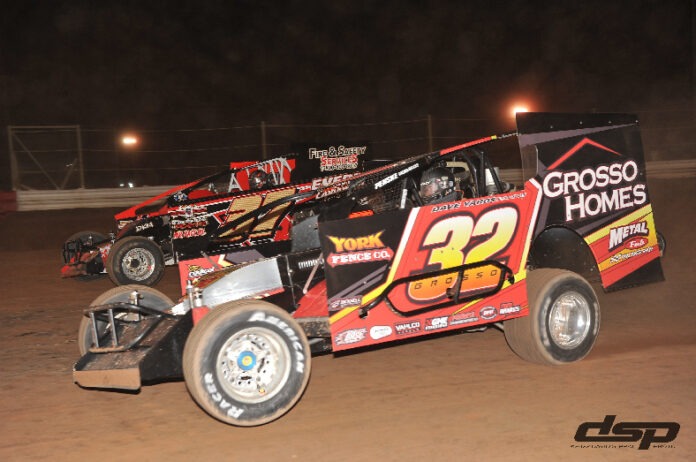 NEW EGYPT, NJ – Coming off a strong 2021 campaign in which he finished second in the season long points race, second generation driver Brandon Grosso powered to victory Saturday night winning the Cabin Fever 40 at the New Egypt Speedway. The win was the ninth of his career and a dominant one as he led from the drop of the green until the checkered flag fell.

Picking the pole position gave the Belle Mead, NJ driver the advantage he needed as a pair of rookies, Anthony Tramontana and Justin Grosso, filled spots two and three. Justin Grosso slipped past Tramontana on lap three and began to set sights on his brother.

Lapped traffic aided the younger brother’s attempt as he quickly closed the gap with ten laps in the books. The fast-paced event saw its first caution flag fly on lap fourteen when David Burns slowed coming down the front stretch with a flat tire.

The double file restart was a good one and again it was the brothers Grosso who were running first and second. Moving into third was 2020 modified champ Danny Bouc while Tramontana was holding onto fourth. Attempting to ward off the Bouc challenges, Justin Grosso lost the battle on lap twenty-nine as the fourteen-time feature winner was anxiously looking for number fifteen.

Once again, with five laps to go, lapped traffic slowed the Grosso Homes #32 giving Bouc one last attempt to challenge the leader, but the young driver was able to maneuver around the traffic to win the big event. Finishing behind Bouc and Justin Grosso was Richie Pratt, as rookie Tramontana turned in a flawless performance taking fifth.

Veteran campaigner Paul Hartwig made a rare appearance to the Route 539 oval pay off as he avoided several on track incidents to win the twenty-lap feature for the Hamilton Auto Clinic/Racersguide.com Crates. The twenty-lap main event could have been billed as the survival of the fittest as issues slowed the pace in the early going but not Hartwig’s desire to win.

George Gareis Jr. led the field of twenty-six for lap one before three caution periods slowed the event. The third though involved leader Gareis, and when the green flag finally returned it was Kevin Borden leading the pack followed by Hartwig and Kris Lilick.

Building up a sizeable lead, Borden encountered problems of his own entering turn two on lap nine as he spun handing the lead to Hartwig. Dan Fleming, who was now in second, tried to track down the #73, but with green flag laps filling the second half of the race, it was all Hartwig.

Taunton, Ma’s Mick D’Agostino captured the Larry’s Hot Rods and Harleys NEWS 20 lap feature in a dramatic way. Pacing himself behind three-time champ Rich Mellor, who led the race from the drop of the green, D’Agostino finally saw the opening he needed with two laps to go to record career win number three. Finishing behind Mellor were Heidi Hedin, Al Cheney, and Duane Nixon.

In the fifteen lap Wash Wagon 4- Cylinder feature, defending champ Justin Dunn wrestled the lead away from Joe Garey Jr on the final lap to take the win. Dunn had led the event from lap one but relinquished it to Garey on lap twelve only to make the dramatic charge back to record the victory.

Next week on the schedule, the Vahlco Wheels modifieds will see action in a thirty-lap feature. The Crates, NEWS, Street Stocks, and Rookies will round out the program along with the first appearance of the Vintage Cars. Action begins at 6PM, warmups at 5PM, spectator gates at 4PM, and the pits will open at 3PM.