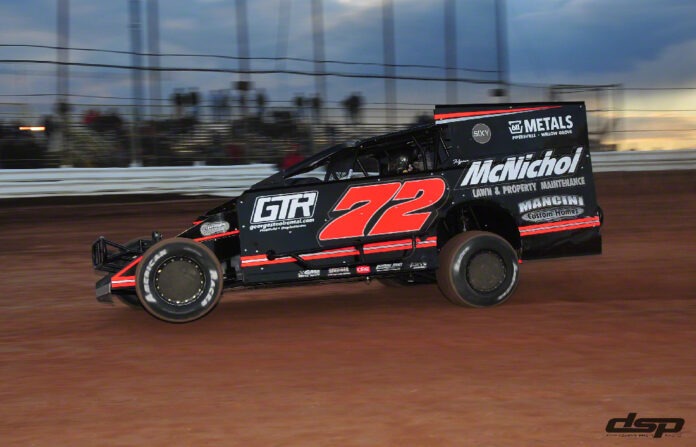 NEW EGYPT, NJ – A champion in both the Crate and former Sportsman divisions, Riegelsville, Pa’s Jim Housworth captured the Vahlco Wheels thirty lap modified main event Saturday night at the New Egypt Speedway. The win was his first as a modified campaigner and quite an impressive one.

Showing the way at the drop of the green, Housworth found both Kevin Vaclavicek and Ryan Conrad trailing in second and third. The caution flag would fly twice on lap two, the first for Conrad as he slowed on the backstretch and the second for a spinning Ron Kline.

Preparing for the double file restart, it was Vaclavicek who was scored the leader on lap three with D J Hunt slipping into third behind Housworth. Gathering up momentum, Housworth regained the number one position on lap five and was off and running.

His small lead was erased on lap eight when third place runner Hunt encountered frontend issues going into turn one necessitating a caution period. Unable to continue, the Hunt #24 was removed from the speedway and after another brief yellow flag period it was back to green flag conditions.

Housworth looked stronger than ever stretching out his lead with every lap scored as Kory Fleming was now third behind Vaclavicek. Beginning to make his move from his eighteenth starting position, three time feature winner this season, Brandon Grosso, was carefully working his way to the front of the field. Cracking the top five on lap twelve, he moved into fourth on lap fifteen and began to set his sights on the top three.

With green flag conditions prevailing, Housworth continued to set a torrid pace with Vaclavicek finding himself being challenged for second on lap twenty by the Belle Mead driver. Finally working his way into second on lap twenty four, Grosso was hoping for a caution period to aide his attempt at a fourth win in a row, but one never appeared as Housworth scored the victory.

In the postponed Hamilton Auto Clinic/RacersGuide.com Crate feature from the previous week, it was Nick Van Wickle picking up where he had left off when the rains came to take home the win. Ryan Simmons was in pursuit the remaining eleven laps, but Van Wickle showed the upper hand taking career win number two. Johnny Bangs recorded his second third place finish in a row as Chris Lilick and Kevin Butler nailed down positions four and five.

In the regularly scheduled twenty lap Crate feature, it was a reversal of the first main event with Simmons taking the win and Van Wickle in second. Wrestling the lead away from Kevin Borden on lap eleven, the Cream Ridge driver paced himself over the last nine laps to bring home career win number six as a Crate campaigner. Van Wickle just did edge out Bangs for the runner up position with Joe Toth and Lilick the top five finishers.

Due to the large field of Freedom Firearms Street Stocks, the regularly scheduled fifteen lap main event was extended to twenty laps and taking the checkered flag was Bill Liedtka. It was the three time track champion’s first of the year and the thirty sixth of his career at the Route 539 oval.

Dennis Seeley led lap one but gave way to Chris Lane on lap two. Lane’s lead was short lived as a flat tire sent him to the pits and inheriting the lead was Vern McLaughlin. Coming off a big win two weeks ago, McLaughlin quickly saw Liedtka in his rear-view mirror and on lap eight the New Egypt resident was leader number four. The two battled all the way to the end, with Liedtka answering the McLaughlin challenges to take the win.

Making their first appearance of the 2022 season, the MASS group saw eighteen cars line up for their twenty five lap feature, and when the final lap was scored it was Eddie Wagner in for the win. Wagner grabbed the lead on lap one and was never really challenged throughout the first twenty three laps of the race. A caution with less than two to go saw his peer’s lineup for the all-important restart, but Wagner never gave them the opportunity to challenge taking the win.

Next up on the schedule at the New Egypt Speedway is Bike Night. Several bikes have already been donated for children of all ages which will be given away during intermission. The Vahlco Wheels modifieds will take center stage along with the Larry’s Hot Rod and Harleys NEWS sprint cars, the Wash Wagon 4 Cylinders, the Rookies, and making their first appearance in nearly eight years, the ARDC midgets. Racing begins promptly at 6PM.