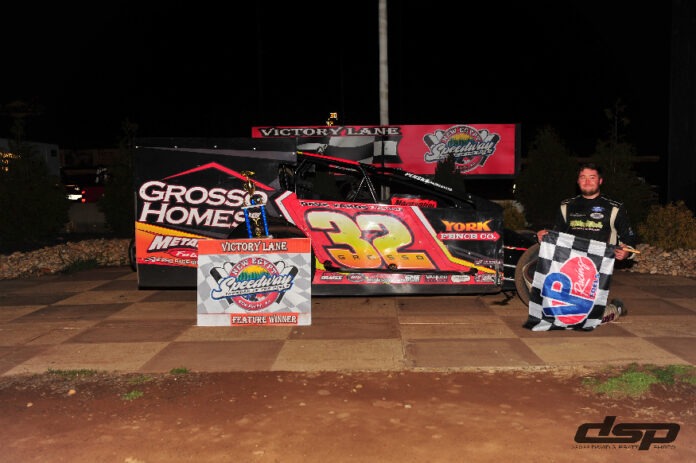 NEW EGYPT, NJ – No doubt, when you are hot you are hot, and Brandon Grosso is on fire as he benefitted from a late race caution period to win the thirty lap Vahlco Wheels modified main event at the New Egypt Speedway. The victory was his fourth in the five events presented this year for the second generation driver.

Justin Grosso took advantage of a pole starting spot to take command of the event with Dakota Kessler and Paul Mancini second and third. Cale Ross brought out the first caution flag of the race spinning in between turns one and two. On the restart, a three car incident coming off of turn two once again saw the yellow lights blink on with Ryan Krachan the only one not able to return to action.

The double file restart saw Grosso and Kessler remain in the top two positions as veteran Frank Cozze slipped into third. The top three held their positions while it was Brando Grosso once again marching his way to the front of the field. Occupying the number seven position with ten laps completed the Belle Mead driver was scored sixth on lap fifteen and one lap later made a bold move to now run fourth. Sitting behind a pair of former track champions, Cozze in second and Danny Bouc third. Grosso vaulted into second as the race headed down the homestretch with brother Justin a good ten car lengths ahead of him. Appearing as though his quest for the win would be a difficult accomplishment, a caution on lap twenty five erased the younger siblings’ lead and set the stage for a five car shoot out.

The single file restart did not hamper the Grosso Homes #32 as the current point leader quickly disposed of his brother to score the win. The race for third was an exciting one which went down to the wire as Cozze edged out Bouc for third while Rick Laubach finished inches behind Bouc for fifth.

Louden Reimert turned in another consistent performance for sixth while Kessler, Richie Pratt, Ross, and Billy Osmun rounded out the top ten.

In the twenty lap Larrys Hot Rods and Harleys headliner, Taunton, Ma driver MIck D’Agostino showed his patience and strength to win his third feature of the young season. Looking to get his season back on track after an opening night crash, Shea Wills paced the fifteen car field for the first six laps before giving way to Rich Mellor.

Mellor appeared to be headed for his first win of the season, but by lap ten, D’Agostino was on his rear bumper and in a challenging position. The first yellow flag of the race flew on lap thirteen, and the double file restart was all the current points leader needed, as he made his move taking the lead on lap fourteen.

A late race caution with two laps to go slowed the pace momentarily, but not D’Agostino as he recorded career win number five. Following Mellor across the line for third was Heidi Hedin with Wills fourth and Al Cheney fifth.

Logan Starr has become a strong candidate for the Rookie championship, winning his second feature of the year in the eight lap main event. Second spot went to current points leader David Miloszar while Dominick Antonelli, Mike Baldwin, and Dylan Morris rounded out the top five.

In the return of the ARDC midgets, it was Brian Carber who was the class act of the field winning the twenty lap feature. Second went to Kenny Johnson, with Jeff Champagne third, Michael Markey fourth, and Mark Bittenger fifth.

Next up on the schedule is Mother’s Day/Ladies Night where all ladies will be admitted half price. On the schedule will be the Vahlco Wheels Modifieds, Larrys Hot Rods & Harleys NEWS, Freedom Firearms Street Stocks, twin 20’s for the Hamilton Auto Clinic/RacersGuide Crates, Rookies, and Vintage cars.