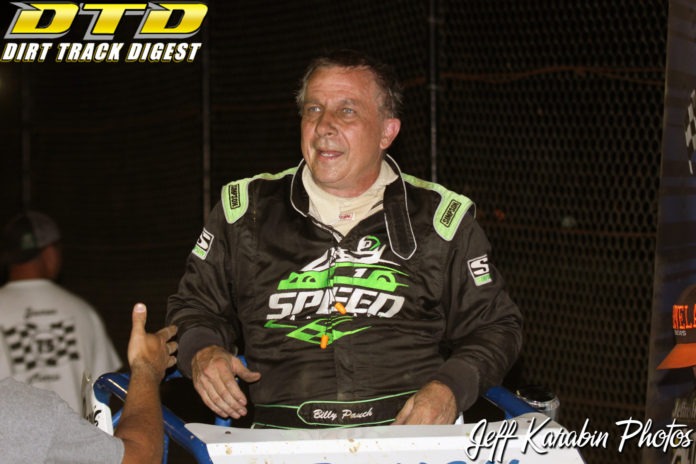 MACUNGIE, PA – The Bear Creek Mountain Resort & Conference Center played host to a crowd of 230 on Saturday, January 7, as the 2016 champions and top point-earners from the JeffreyHogueRealtor.com Action Track USA were saluted at the track’s annual awards banquet. Sadly, only one-half of the promotional team, Doug Rose, was present as Rich Tobias was stricken with the flu and unable to make the trip to Bear Creek.

Special recognition was given to the 2016 champion of the USAC All Pro SpeedSTR division, Billy Pauch, who recently announced that he is giving up the seat of Mike Heffner’s No. 27, and will no longer compete in the SpeedSTR class at the Kutztown Fairgrounds oval.
“After winning the point title, I decided it was time…there’s no better way to go out than to go out on top,” stated the Frenchtown, NJ driver who has compiled numerous championships in various divisions and at a plethora of speedways during his storied career.
“They’re all special,” he said of his many point crowns. “But it’s time to let the younger guys have a shot…I’m going to turn 60 soon and these cars (SpeedSTRs) are not easy to handle. Rich (Tobias) designed them that way; he wants them to be tough to drive, and that does make it a lot of fun, but it’s a lot of hard work, too. And the competition at Kutztown is tremendous…that makes it even tougher to do well in these cars. So I’m very proud of this championship and to win it for Mike (Heffner, his car owner) is really great. It’s been an honor to drive for him these past three years.”
Pauch continued his championship speech with some extremely valuable words of wisdom and advice for the numerous teenaged and pre-teen drivers in attendance. “The crowd at Kutztown – and the grandstands are packed each week, which is terrific – is great; they are really into it and that makes it more fun as a driver. And for all you younger drivers, just remember, without that crowd who comes to watch you, there is no racing. Make sure you thank them (the fans) every time you get the chance and always do your best to put on a good show for them.”
Pauch turns over the reigns of Heffner’s potent Lelands.com No. 27 to his son, Billy Jr., who has already racked up a pair of point titles at the JeffreyHogueRealtor.com Action Track USA in SpeedSTR competition.
In 2016, the elder Pauch notched four feature wins enroute to the title, including two in a row in the month of May to stake himself to an early point lead. He added a third victory in one-half of the Ronnie Tobias Memorial in June, then capped off his championship season by winning the Kutztown Fair SpeedSTR National in mid-August. When the curtain-closing Dick Tobias Classic was rained out on August 21, Pauch joined his son as an Action Track USA SpeedSTR Champion.
Tim Buckwalter authored a strong season to finish runner-up in points. Buckwalter scored three wins and ended the season with three consecutive top-three finishes.
Mike Bednar, Steven Nederostek, and Matt Janisch completed the top five in the SpeedSTR standings.


Eddie Strada, from Lake Ariel, Pa., produced a championship in Russ Thornton’s No. 36D in the 2016 Hyper Racing Wingless 600 Sprints Powered by Hyper Fuel Injection Technology. Ironically, Strada steered an RTS car to the title on the strength of two victories and, in the 11 features run for the 600 Sprints, he accumulated a total of seven top-five finishes.
“Those people sitting at that table,” noted Strada as he pointed to his family, crew, and car owner Thornton, “made this possible and make it so much fun to go racing. The car was fantastic each week and I love racing at Kutztown; the strength of the competition is incredible.”
Strada, who has also turned into a top notch 305 Sprint Car campaigner, was asked if he intends to return to the 600 Sprint wars at Action Track USA to defend his title in 2017. His answer was a simple but emphatic, “Oh, hell yeah!”.
His two triumphs were memorable as he put together his title-winning effort. He registered an early season King of No Wing Shootout victory, then flat-footed his way from 26th starting spot to win in spectacular fashion on July 27. Strada and Billy Pauch Jr. were tied for the point lead heading into the AEI Equipment Kutztown Fair Nationals in August, and Strada capitalized on a sixth place finish in that 60-lapper to win the championship by a mere five points over Pauch when the season finale was rained out.
The 2015 point champ, Tim Buckwalter, finished third in the standings with two-time titlist Jay Hartman and Brandon Azzalina rounding out the top five.

The 2016 campaign was truly a dream season for Mertztown, Pa.’s Dylan Hoch, as he captured his first Action Track USA point title in the NAPA Auto Parts All Star Slingshot division and came away victorious in the richest Slingshot race ever run – the $4,000 to win Slinger Warehouse Super Slingshot Fair National in August.
“It was one of our main goals of the year,” he explained, “to win the points at Action Track. To do it in our (family owned) car is really nice, and I’ve got to thank my entire family, the crew, and all of my sponsors who made this happen.”
Hoch recorded four feature victories during the season, with three of them occurring by June 22nd to assist him in putting a chokehold on the point lead. His Caldwell Bankers/ Walbert Funeral Home/ Wertz Beverage of Topton No. 35 never faltered and Hoch had the championship wrapped up prior to the final race (which was rained out).
Even though he is still looking for his first Action Track USA win, Seth Spayd utilized amazing consistency to finish second in the point chase. Travis Bieber, Dutch Classic victor Anthony Raisner, and the year’s Most Popular Driver at Action Track USA, Austin Stufflet, finished third through fifth in the Slingshot standings.

In the five races run for the Junior Slingshot division, Saylorsburg’s Jared Silfee won twice and earned a pair of third place finishes. Those efforts propelled Silfee to the point title for the Junior Slingers, as he narrowly defeated Fleetwood’s Kyle Smith.
One of Silfee’s victories came in the Junior Slingshot National Tour event in August. He backed it up with a strong third place run in the second feature of that evening to claim the crown over Smith, who also registered two wins in Junior Slingshot events over the course of the season.
“At the beginning of the season, I really didn’t know if we’d be able to win (the point title),” said Silfee. “But we ran good, thanks to my dad, each time out and got the job done. It really turned into a great year.”
Smith, who also won an All Star Slingshot feature at the end of the season, wound up a close second in points. Cole Stangle, Reese Nowotarski, and Gavin Santee completed the top five in the Junior Slingshot point standings.

As part of the Hyper Racing sponsorship of the wingless 600 Sprints and in conjunction with the Action Track USA Takeover Nights at Linda’s Speedway, a raffle was held at the banquet for those drivers who had perfect attendance or missed just one event during the 2016 season at Action Track USA and the five race series at Linda’s.
The winner of a 2017 Hyper Chassis was Tommy Kunsman Jr., while Jacob Severn’s name was picked as the recipient of a Hyper Fuel Injection System. A complete set of Keizer Wheels went to Jesse Maurer, and Sam Kravitsky was the winner of a complete rod end kit for a Hyper 600 Sprint, courtesy of FK Rod Ends.
Jay Hartman, Robbie Hocker, and Tim Buckwalter also had perfect attendance at the required events. Unfortunately, their names were not chosen in the drawing at the banquet that was overseen by Hyper Racing representative Austin Quick.

The top five drivers in points at the Action Track USA Takeover Nights at Linda’s were also recognized at the banquet as the SpeedSTRs, wingless 600 Sprints, and All Star Slingshots took part in all five Takeover events. The point champions of the five race series included Tim Buckwalter (SpeedSTR), Steve Whary (600 Sprints), and Sam Scicchitano (All Star Slingshots).

The 2017 schedule for the JeffreyHogueRealtor.com Action Track USA was released at the banquet. It features a special, first-time-ever Sunday evening opener on May 14, as last year’s rained out Dick Tobias Classic becomes the curtain-raising event of the fifth season under the Tobias-Rose promotional team. Taking part in the Dick Tobias Classic will be the USAC All Pro SpeedSTRs (in a 75-lap main event), the Hyper Racing 600 Sprints, and the NAPA Auto Parts All Star Slingshots.
A second event of the same name will take place on Sunday, August 6, with a rain date of August 20.
More details and additional information regarding the 2017 season can be obtained by visiting the Action Track USA/ Speedway Entertainment booth at the upcoming Motorsports Show in Oaks, Pa. on January 20th, 21st, and 22nd.
There is always plenty of information and news on the speedway’s website, www.actiontrackusa.com, its Facebook page, or on Twitter.