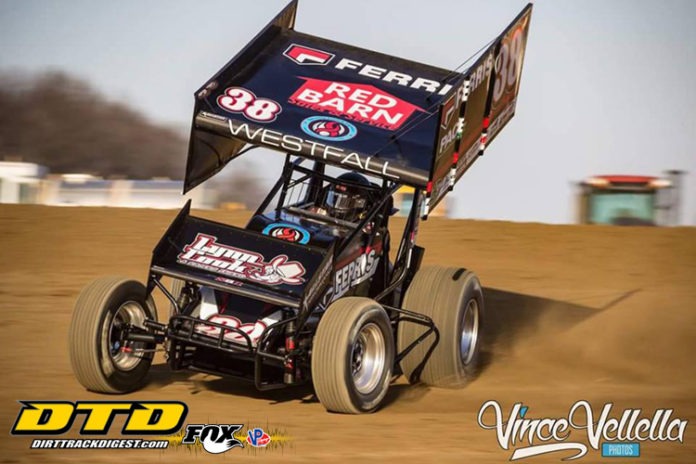 KUTZTOWN, PA – When the green flag waves to begin the fifth season of activity at the JeffreyHogueRealtor.com Action Track USA, a new name – one with a very impressive resume` – will join the USAC All Pro SpeedSTR division, bolstering an already strong Wednesday night field of competitors.

Matt Westfall, from Pleasant Hill, Ohio, will make the weekly trip to Action Track USA on the Kutztown Fairgrounds, to steer a brand new SpeedSTR owned by Milt Aquilini. The car is complete and ready to go, and it will be on display in the Speedway Entertainment/ Action Track USA booth at this weekend’s Motorsports Show in Oaks, Pa.

“The Flying Buckeye” jets to the Berks County oval with a set of very solid credentials. Westfall has been racing since the age of six (he turned 40 years-old in December), and he’s driven just about everything with four wheels…Karts, Mini-Sprints, both winged and wingless Sprint Cars, Midgets, Modifieds, and Late Models. He was also named the 2002 Rookie of the Year in USAC’s Silver Crown division.

Westfall, who lists Jack Hewitt as his role model in racing, was the Rookie of the Year and Champion of the NAMARS Midget Series in 1998. He won the 2010 and 2011 Sprint Car point titles at Waynesfield Raceway, and captured the 2011 RoY award in Eldora’s Late Model class. He’s also visited victory lane in a USAC Sprint Car feature at Eldora – his favorite race track.

Modified victories have come at the UNOH DIRTcar Nationals at Volusia Speedway in Barberville, FL, and in 2015 Westfall was named the DARF Driver of the Year. That was the same season in which he captured the Eldora Late Model Championship and the Buckeye Late Model Dirt Week title.

Westfall also made the Saturday night A-Main at the prestigious Chili Bowl Midget Nationals in five consecutive attempts, but last week’s edition of the biggest indoor dirt race in the world wasn’t as kind to the Ohio native. He qualified for the feature on his preliminary night (Tuesday), but was collected in Kyle Larson’s flip/crash just a few laps from the finish. On Saturday, Westfall was not able to climb out of the D-Main.

Claiming that he “just wants to race as much as possible…in any type of racecar”, Westfall is ready for his newest challenge…the USAC All Pro SpeedSTR division. Teaming with Aquilini, who’s been helping him with his Sprint Car effort for the past few seasons, seems a natural fit.

Aquilini’s involvement in racing goes back decades, to the Reading Fairgrounds and traveling as a member of the late Ronnie Tobias’ crew. Milt also owned ARDC Midgets for several years, and Ray Bull drove his cars to numerous race wins and championships with the American Racing Drivers Club. Most recently, Aquilini has served as an official at Action Track USA.

While the car won’t make its debut until the May 14 season opener (the Dick Tobias Classic, a 75-lapper for the SpeedSTRs), it will be unveiled to the public at this weekend’s PPB Motorsports Racecar & Trade Show at the Greater Philadelphia Expo Center in Oaks, Pa.