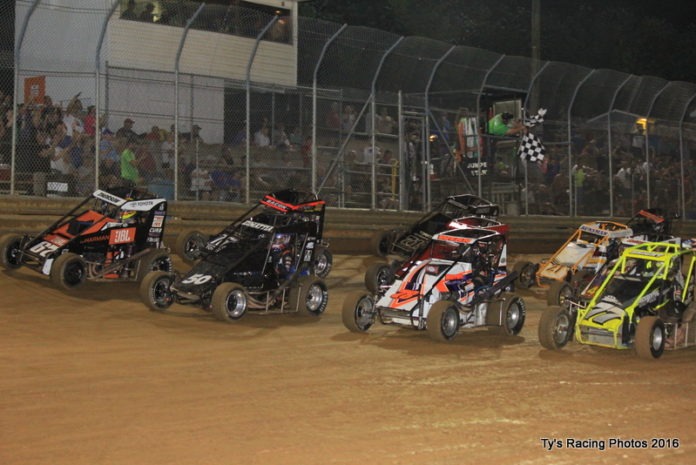 NEWMANSTOWN, PA – When the MJF Trucking No Wing Spring Fling kicks off the 2017 racing season at Lanco’s Clyde Martin Memorial Speedway on Saturday, April 1st, the beginning of a new era will continue for the Midgets of the American Racing Drivers Club. And that is not an April Fool’s joke.

The ARDC Midgets will headline the Clyde’s opener after raising the curtain on their 75th season at Linda’s Speedway the previous night at Linda’s Speedway. Although ARDC is the oldest sanctioning body for Midget auto racing in the USA, 2017 marks a rebirth of sorts for the organization. Its new partnership with USAC has the entire club energized and pumped up as it begins, at 75 years-old, a new day…and with a new name.

They are now the USAC Eastern Regional Midgets presented by ARDC, and their second race of the season will be the fifth time – ever – that they’ve competed at Lanco’s Clyde Martin Memorial Speedway. Ryan Greth captured the mighty Midgets maiden voyage at the Clyde in 2015, while the Phenom, Alex Bright, swept both stand-alone ARDC features last season as he streaked to his first championship with the historic organization. En route to his USAC National Midget Championship, Tanner Thorson pulled off a last lap, final turn victory last August in the inaugural visit by the USAC National Midget tour.

Greth and Bright are both expected to be in the field on April 1st, when the USAC/ARDC Midgets are joined by wingless 600 and 270 Micro-Sprints for the MJF Trucking No Wing Spring Fling. In last year’s event, Jack Conover was victorious in the wingless 600 feature. This season’s opener will see the wingless 270’s on the card for the first time.


Adult general admission (for ages 13 and older) is $12, with children ages 12 and under getting in absolutely free. Pit passes will cost $30.

The first day of April will be a very busy day at the speedway, as car inspection and practice for the Clyde’s five weekly winged Micro-Sprint divisions takes place prior to the MJF Trucking No Wing Spring Fling.

Gates open at 8:30 in the morning with inspections scheduled from 9:00 to 11:30 a.m. Rookie Orientation will run for an hour, from 11:30 – 12:30, before a three-hour open practice session takes place from 12:30 to 3:30 p.m. Practice is limited to those Lanco club members whose cars have successfully passed inspection. There is a $5 cost to enter the pits for practice and $10 car entry fee.

Additional information and details regarding inspection, practice, and the MJF Trucking No Wing Spring Fling can be found on the track’s website, www.clydemartinspeedway.com and at Facebook.com/Clyde Martin Memorial Speedway. Follow the speedway and its events on Twitter: @LancoCMMS.

It’s finally time to get the new season underway, and you’ve just gotta come out and LIVE the excitement that is Lanco and the No Wing Spring Fling!