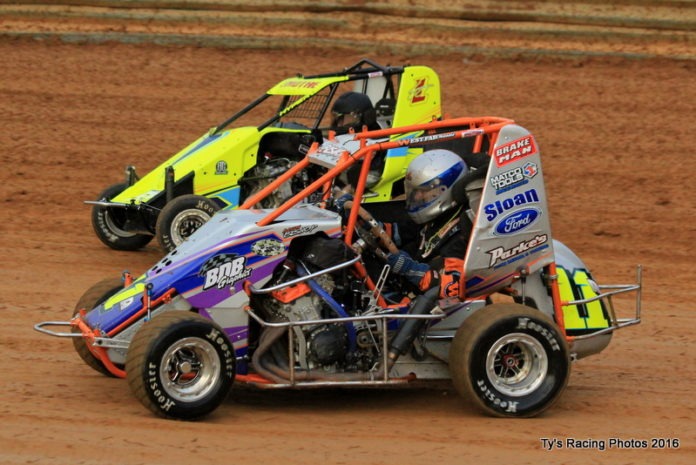 NEWMANSTOWN, PA – This Saturday’s MJF Trucking No Wing Spring Fling kicks off the 2017 season in grand style at Lanco’s Clyde Martin Memorial Speedway. The USAC Eastern Regional Midgets Presented by ARDC will headline the event, and the mighty Midgets will be joined by the wingless 600 and wingless 270 Micro-Sprints.

Following the April 1st curtain-raiser, the Clyde’s weekly divisions take center stage as the “regular season” begins on Saturday, April 8. The winged warriors of the 600cc, 270cc, Sportsman, 125cc, and 250cc Four-Stroke classes have been chomping at the bit to get started, and there are several reasons why they are so anxious to finally take the green and get the 2017 slate of events underway.

Over the winter, Lanco officials increased the payout for just about every car count in each division. As one example to illustrate the increases, a driver could take home $500 for winning a point paying 600cc or 270cc feature, provided there are more than 30 cars entered in the class on a particular night. The entire purse breakdown for each class, and all phases of car counts, can be found on the News page at www.clydemartinspeedway.com.

To assist in supporting the increased payouts, the Lanco club has partnered with businesses who have become title sponsors for three of the weekly divisions.

Hyper Racing is now the title sponsor for the 600cc class at the Clyde, while Viper Chassis will serve in the same role for the 270cc division. Leading the way for the 250cc Four-Stroke class is Hammer Down Engines, and Lanco, as well as its race teams, is genuinely appreciative and excited to partner with these three outstanding companies.


Businesses or individuals interested in becoming title sponsors for the Sportsman class or 125cc division should contact Lanco President James Harrington or other Lanco officials or Board members. Contact information can be found on the speedway’s website.

Fresh clay will also stoke the excitement level in dirt track drivers, and the anticipation is currently off the charts for the drivers who will be mashing the loud pedal at the Clyde Martin Memorial Speedway this year.

In the fall of 2016, both ends of the banked oval were excavated; the old clay was removed down to its base in all four corners and new clay was laid down in its place. The new surface was allowed to knit over the winter, and even with the mid-March snowstorm (thank you, Stella), the race track has come around nicely and is ready to go.

Following the April 1st No Wing Spring Fling, which is the first of three races for the Midgets at Clyde Martin in 2017, the points-paying regular season takes the green flag on April 8. The Hyper Racing 600’s, the Viper Chassis 270’s, the Sportsman, 125cc, and Hammer Down Engines 250cc Four-Strokes will compete in qualifying heats, consolations, and 25-lap main events. The April 8 program is sponsored by RTS Chassis.

On April 8, gates open at 4 p.m. Warm-ups begin at 5:30, and the first heat race gets underway at 6:30. This time schedule will be in effect for all of the April and May events, and again in September. Races at the Clyde in June, July, and August (regular point events) will see the times adjusted, i.e. moved back, by 30 minutes.

This Saturday, it ain’t no April Fools Joke as the USAC Eastern Regional Midgets presented by ARDC rock the house at the Clyde Martin Memorial Speedway. While the Midgets are squarely in the spotlight, there could be a considerable amount of cash to be claimed by the wingless 600 and wingless 270 Micro-Sprints, too.

With the number of entries at 40 or more (per class), the winning driver will pocket a hefty $1,000. And Lamar Shaffer of LHS Engines has posted even more incentives for drivers running his power plants in the wingless 600 class.

The first three drivers across the finish line in the wingless 600 feature (who have an LHS engine on their car), no matter where he/she finishes, will earn a nice bonus from Shaffer. The first driver to finish with an LHS engine receives a $300 bonus, while the next pair of wheel-twisters crossing the stripe with an LHS motor will receive $150 and $50, respectively.

Two huge weeks of racing kick start the new season at Lanco’s Clyde Martin Memorial Speedway on April 1st and April 8th, and you’ve just gotta be there to LIVE the excitement that is Lanco!