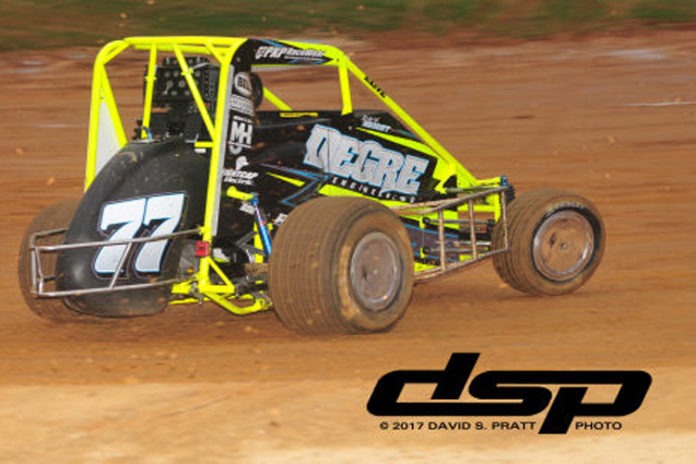 NEWMANSTOWN, PA – On Saturday night at Lanco’s Clyde Martin Memorial Speedway, it was deja-vu all over again for Alex Bright, as he captured the season opener for the USAC Eastern Regional Midgets Presented by ARDC.

The scheduled lidlifter for the touring Midget series was supposed to occur on Friday night at Linda’s Speedway, but that event was rained out so the 78th season of the American Racing Drivers Club, now in partnership with USAC, kicked off at Clyde Martin’s MJF Trucking No Wing Spring Fling on Saturday. And “the Phenom”, Alex Bright, continued his winning ways on the banked oval. A two-time winner in stand-alone ARDC events at the Clyde in 2016, Bright once again took advantage of another driver’s misfortune to snare the race lead, then drive to victory in the 25-lap feature, as he began defense of his American Racing Drivers Club Championship.
The other winners in the MJF Trucking No Wing Spring Fling included Tim Buckwalter (Hyper Racing Wingless 600 Sprints) and Mike Rutherford (Viper Chassis Wingless 270 Sprints).

The 25-lapper for the Midgets went green with Ryan Greth springing into the top spot as polesitter Troy Betts bobbled a bit entering turn one. The race track proved to be quite a challenge for all the drivers after absorbing two feet of snow in mid-March, then a couple inches of rain just one day before the No Wing Spring Fling. But Greth was up to the challenge, leading the first 11 circuits over Alex Bright, who quickly sliced his way from fifth on the starting grid to run second by the time lap two was scored.


Caution periods with two, four, and nine laps complete kept the field stacked up, and Bright hounded Greth during each green flag run until he finally found the opening he needed to sneak by the New Cumberland, Pa. driver and into the lead. Greth’s car was slowing and under caution at the halfway point, his No. 4R coasted to a halt on the backstretch while he was still holding down the runner-up position.

Kyle Spence was a man on a mission during the middle portion of the race; Spence was just about the only driver willing to try to a higher line and he stuck with it until the outside groove began to work for him. Spence was steadily picking off the cars in front of him, sailing into third place and beginning his assault on Troy Betts for second when something let go on his No. 25k, locking up the rear wheels and forcing him to skid to a stop at the entrance to turn one with nine laps remaining.

Bright, from Collegeville Pa., kept Betts at bay for the remainder of the race, winning handily for the third time in four stand-alone ARDC events at the Clyde. Greth is the only other driver to notch an ARDC victory at Clyde Martin, winning the very first time the Midgets competed at the Newmanstown oval on July 4, 2015.

“Tonight it was all about taking advantage of other driver’s mistakes and bad luck,” said Bright in his victory lane interview. “Thanks to the fans for coming out on this cold night to watch us, and congratulations to the track crew and everyone at Lanco for giving us a track to race on after all that rain yesterday. It may have been rough, but it’s a miracle that we were able to race at all, and I’ll take being able to race, even on a rough track, over not racing.”

Spence recorded the quickest lap in the timed hot lap sessions, earning an extra $150 for his 11.071-second trip around the clay.

Pottstown’s Tim Buckwalter registered his second straight Wingless 600 Sprint triumph at Clyde Martin, following up his victory in last year’s Labor Day Shootout with a win in Saturday night’s 25-lap main. The day did not start out well for the Barry & Cheryl Greth-owned team, however.

“Barry called me this morning and said the car wouldn’t run when he tried to fire it at home,” smiled Buckwalter in the winner’s circle. “We needed a new Power Comnander, and his son Ryan, who works for Hyper Racing, brought one to the track. Then Jarid Kunkle had to lend us an injector before the feature, so it’s been an eventful day for us but we always seem to win when we have problems like this.”

TJ Greve blasted to the early lead over Eric Whitby as Buckwalter stormed from his sixth starting position to snatch the runner-up spot from Whitby on the fourth tour.

On the eighth revolution, Greve skated up the turn four banking and Buckwalter seized the opportunity, zipping past the No. 24x to take command. While Buckwalter darted out to a healthy lead, the action behind him was furious as Kyle Lick, in Scott Rupp’s No. 53, weaved his way into second and Ryan Groff took over the third position. With nine to go, Heath Hehnly entered the picture (after starting 11th), as he passed Groff for third and Kyle Spence gassed his way into fourth spot.

Lick closed in on Buckwalter as the laps ticked off; heading through three and four on the final revolution, Lick almost turned over as he attempted to get alongside Buckwalter. Lick’s car came to a stop after bouncing on its nose and tail, causing the yellow to be thrown and setting up a one lap dash to the finish.

Buckwalter held off Hehnly for the victory, with Spence claiming third ahead of James Morris (who started 21st) and Luke Thomas.

In addition to the $500 first place payout, Buckwalter earned another $300 for being the first driver to cross the stripe using an LHS Engine. The bonus money, paid to the top three finishers who utilized his motors, came courtesy of Lamar Shaffer of LHS Racing Engines.
With 39 of the Wingless 600’s in competition on Saturday, qualifying heat race victories went to Hehnly, Greve, Groff, and Lick. The two B-Mains were claimed by Morris and Brandon Azzalina.

When the No. 3s of Nick Skias twitched while exiting turn two on the first lap, Mike Rutherford accelerated by him and took a lead that he would not give up throughout the 25 lap Viper Chassis Wingless 270 Sprint feature.

Rutherford, from Lititz Pa., encountered one scary moment en route to the triumph. On a double-file restart with five laps in the books, his Kaylor Petro No. 5k did not take off as the green flag waved. With the field stacking up behind him, he managed to limp around the track and continue, but three of his challengers were not as fortunate. Adam Minzer, Mike Miller, and Dan Lane Jr. tangled and stopped in turn three, forcing another yellow and subsequent restart, saving Rutherford and putting him back in front. This time, Rutherford’s mount responded when he mashed the throttle, and he was able to maintain the lead.

“There must have been some mud packed around the shifter cable or something, because it just wouldn’t shift on that restart,” noted Rutherford afterward. “I was shaking the car under yellow and moving around and the mud must have fallen off…thank goodness.”

Tyler Ulrich’s No. 42U came to life in the high groove over the next five circuits, with Ulrich rolling the top to pass Pete Skias and Cameron Bellinger and take the runner-up slot. On a restart with ten complete, though, Ulrich’s car caught a rut in the third turn and flipped, handing second place back to Bellinger.

Additional caution periods followed as Rutherford held off Bellinger and Pete Skias. With the track-imposed curfew looming ominously near, another yellow flag waved with 16 laps scored and the race was declared complete.

Rutherford was the winner, with Bellinger notching a strong runner-up finish over Pete Skias and Richie Hartman. Nick Skias wound up fifth at the end.

This Saturday, April 8, Lanco’s Clyde Martin Memorial Speedway swings back into action as the track’s “regular season” of point-paying events begins with the RTS Chassis Spring Has Sprung Opener featuring the weekly winged divisions that include the Hyper Racing 600’s, the Viper Chassis 270’s, the Hammer Down Engines 250cc Four-Strokes, the Sportsman, and the 125cc Micro-Sprints.

Come on out and LIVE the excitement that is Lanco!