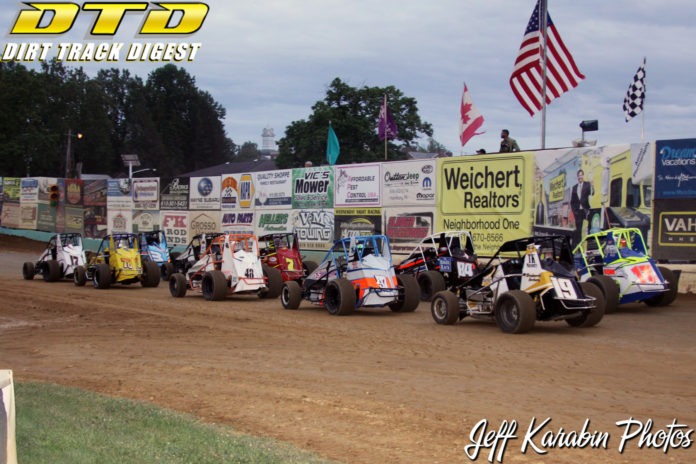 MYERSTOWN, PA  – When the USAC All Pro SpeedSTRs begin their 2017 season this Friday at Linda’s Speedway in Jonestown, Pa., last year’s National Champion will be on hand, and he’s sent a message to his fellow competitors.

“We’re going to try and get off to a stronger start this year,” noted Tim Buckwalter during last Friday’s practice sessions at Linda’s. “Last season ended well, but we struggled a bit in the beginning because we just couldn’t get the motor running the way we wanted.”

If Buckwalter and his Paul Lotier Jr.-owned team actually come out of the blocks stronger than they did 12 months ago, it could be a long season for the plethora of championship contenders in the SpeedSTR division.

The 2016 campaign saw Buckwalter claim the opening night win at Linda’s as well as the opener at the JeffreyHogueRealtor.com Action Track USA, so the power plant in the Lotier mount could not have been very far out of tune. Buckwalter, from Pottstown, Pa., went on to chalk up three more victories at Linda’s, giving him four wins in the five race series. Only Mike Bednar, the 2015 National SpeedSTR champ, prevented a Buckwalter sweep of the events on the quarter-mile in Jonestown.


At Action Track USA on the Kutztown Fairgrounds, Buckwalter notched a total of three triumphs and, even though he did not win the point championship at that facility, those victories, along with the four wins at Linda’s, helped propel him to the SpeedSTR’s United States Regional title and put Buckwalter in position to go for the National Championship at the season-ending Fall Jamboree at Trail-Way Speedway.

A pair of runner-up finishes in the two-day Jamboree cemented Buckwalter’s National title.

The 2015 National Champ and last year’s Action Track USA point king, Billy Pauch Sr., has decided to step away from SpeedSTR competition. He leaves as the all time leading feature winner at Action Track USA, with ten, and a career total of 13 SpeedSTR triumphs.

There will still be a Pauch in the seat of Mike Heffner’s potent Leland’s.com No. 27, though, as Billy Jr. climbs in to try and wrestle the National Championship from Buckwalter. The younger Pauch and car owner Bob Lesko teamed up to win a pair of Action Track USA titles in 2014 and 2015, but sagged to sixth in the point chase one year ago. When Lesko decided to get out of racing, Pauch Jr. jumped at the opportunity to drive for Heffner. The duo made their debut in November’s Fall Jamboree, with Billy winning the first day’s feature.

Bednar, from Whitehall, Pa., returns in his Bednar Racing/ Kovatch Ford/ Racing Against Autism No. 46. Single wins at Linda’s and Action Track USA highlighted his 2016 season, especially the victory in Kutztown where he nipped Steve Buckwalter by a fraction of a second in a photo finish. The former National SpeedSTR Champion is a definite threat to reclaim the crown from Buckwalter.

Oley’s Louden Reimert captured last season’s Rising Star Award at the banquet in January, and he also recorded his very first SpeedSTR victory in the final race of the year at Trail-Way. Reimert is back in 2017 with his Kochel Equipment/ Rhoads Livestock Hauling No. 58. With a full season of competition under his belt, along with the confidence gained from that first win, he could be a dark horse pick for the title.

Steven Nederostek, from Lehighton, has become Mr. Consistency on the SpeedSTR tour. Still searching for that elusive first triumph, Nederostek made a home for himself near the front of the pack at almost every race. He finished fourth in Action Track points and sixth in the National standings.

Matt Janisch, the ATQMRA Champ from last year, also authored a fine season in his No. 48 SpeedSTR. Like Nederostek, the Nazareth, Pa. charger is knocking on the door for his initial SpeedSTR victory.

Briggs Danner has also established himself as one to watch in the USAC All Pro SpeedSTR division. It took a month or so for Danner to get comfortable aboard his Ironton Telephone No. 78, but once he did, the Allentown, Pa. throttle-jockey became a threat to win during the stretch run at Action Track USA. His season highlight came on August 3rd when he hustled veteran Earl Paules all the way to the checkered before settling for a close runner-up finish to Paules.

And Paules is ready for battle once again in his E. Schneider & Sons Trucking & Scrap Hauling No. 8. The Kunkletown, Pa. wheel-twister always puts on a show when he plays in the dirt, usually planting the right-rear tire of his mount up against the wall.

This will be a very special season, although he will almost certainly downplay the accomplishment, for Kenny Brightbill. To many, he is a living legend, and 2017 marks his 50th season behind the wheel of a racecar. The Sinking Spring native plans to run his SpeedSTR as often as he feels like it, but hinted that this may well be the final year that he buckles into a racing machine.

Kenny’s son Brad will also return to SpeedSTR competition in the Heavy Business No. 19B. Brad has a total of three career SpeedSTR victories at Action Track USA.

Back in the days of the Olympic Stock division at the Reading Fairgrounds, names like Haus, Drevicki, and Prutzman were winning most of the events as they “cut their racing teeth” before moving on to other classes of competition. Those names are still prevalent in the SpeedSTR class today, but in two cases, it is the sons of those Olympic Stock racers who are gassing the SpeedSTRs.

Andy Haus, a Super Late Model champion and son of Scotty Haus, has been trying to find the luck he needs to go along with the speed in his Fastener Place No. 76. He’s run well over the past two seasons, but hasn’t had the results that should accompany his efforts. His dad Scott was a big winner in those Olympic Stock races, then went on to an outstanding career in the Late Model ranks.

Steve Drevicki’s dad, Dave, battled Scott Haus and the other Olympic Stock competitors at Reading. Now it’s Steve’s turn to shine, and he has…winning in everything he’s driven from Quarter-Midgets to Micro-Sprints to becoming a two-time champion of the ARDC Midgets. Steve also registered his first SpeedSTR victory in 2016, and if not for some dreadful luck, could have racked up at least two or three additional triumphs.

There is one driver from the old Olympic Stock days, though, who continues to climb into high powered racing machines – including SpeedSTRs – and his name is Keith Prutzman.
Prutzman is gearing up for his second season aboard the Buck Rubs No. 28 SpeedSTR, and whole-heartedly admits that he faced a huge learning curve when he first drove in the division in 2016. He’s looking for bigger and better results this year, and the veteran of Super Sportsman, Limited Late Models, URC and 358 Sprint Cars will undoubtedly get a handle on the difficult but fun to drive SpeedSTR.

When Keith Prutzman and Kenny Brightbill were pounding the clay at the half-mile known as the Home of Champions, Steve Drevicki and Andy Haus were still years from being born. It’s very cool that now, both Prutzman and Brightbill are still having fun and competing against the sons of those drivers with whom they raced almost 40 years ago.

Many more of the SpeedSTR contingent like John Bockhorn, Tom and TJ Mayberry, Kris Graver, Dylan Hoch, and others will begin the 2017 SpeedSTR season this Friday, April 21, at Linda’s Speedway in the first of five Action Track TakeOver Nights at the Jonestown oval. Warm-ups get underway at 7 p.m. with racing at 7:30. Joining the SpeedSTRs will be the Hyper Racing Wingless 600 Sprints, the All Star Slingshots, and the winged 270cc Micro-Sprints.

Sunday, May 14, is Mother’s Day and mom will definitely tell you the place to be on that evening is the JeffreyHogueRealtor.com Action Track USA on the Kutztown Fairgrounds. The season kicks off with a thunderous boom, as Rich Tobias and Doug Rose begin their fifth year at the helm with the running of last year’s rained out Dick Tobias Classic. The Tobias Classic is highlighted by a 75-lap, $5,000 to win main event for the USAC All Pro SpeedSTRs. The Hyper Racing 600 Sprints and All Star Slingshots are also on the May 14 menu, with a starting time of 5:15 p.m for warm-ups and heat races go green at 6:00.