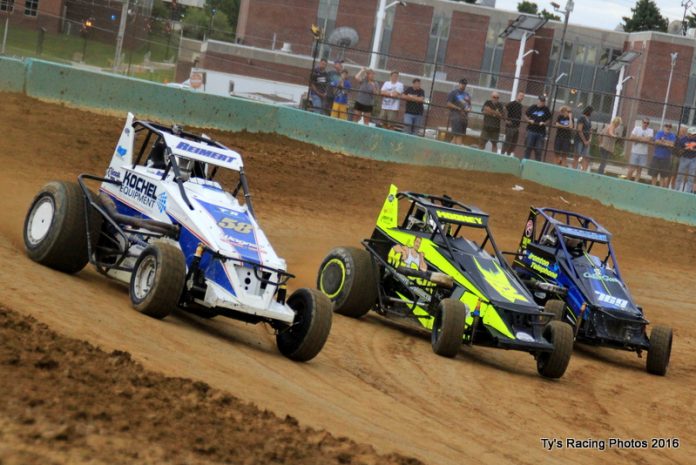 KUTZTOWN, PA – The Fourth Annual Dick Tobias Classic, set to kick off the fifth season of competition at the JeffreyHogueRealtor.com Action Track USA on Sunday, May 14, will once again pay tribute to one of the best drivers and innovative minds that dirt track racing has ever known, the late, great Dick “Toby” Tobias of Lebanon, PA.

Before the races begin on Sunday, however, Action Track USA co-promoters Rich Tobias and Doug Rose will honor the memory of another Berks County racer by naming a section of the grandstand in his honor.

The late Ernie McCoy, whose real name was Ernest Musser, was born in Reading and did much of his racing in Sprint Cars and Midgets at speedways in Pennsylvania and New Jersey. But the driver who earned the nickname “Lover Boy McCoy” also managed to compete – twice – in the Indianapolis 500. Ernie finished a very respectable eighth in his first attempt in 1953, which was also one of the hottest 500’s in history, with race day temperature at more than 100 degrees. Ernie was one of only three drivers who did not need a relief driver that day, making his top-ten finish all the more remarkable.

McCoy returned to the Speedway in ’54 and finished 16th in what would be his final start in the Indianapolis 500. He attempted, but did not qualify for the 1955 edition of the 500.

Some of Ernie’s career highlights include a second place finish in AAA Eastern Sprint Car points in 1952 and third in ’54. In the late ’50’s, he returned to his first love, the ARDC Midgets, where he once again became one of the stars, and a fan favorite, in the traveling series. McCoy recorded a total of 22 ARDC victories during his career, placing him 17th on the star-studded all-time win list.

Several family members are expected to attend Sunday’s dedication ceremony at Action Track USA and one of them will be racing that night. Shillington’s Seth Spayd, a rising star in the All Star Slingshot division, is the great-grandson of Ernie (Musser) McCoy. Seth’s mother, Heather Musser Spayd, is McCoy’s granddaughter.

This will be the fifth section of the Kutztown Fairgrounds grandstand to be named in memory of a former Berks County driver since Tobias and Rose took the helm and created Action Track USA. Others who have received the honor include Freddy Adam, Russell “Red” Coffin, Vince Conrad, and just last year, Jimmy Keppley.

After the dedication, attention will turn to the first race of the 2017 season at the progressively banked oval. The USAC All Pro SpeedSTRs will compete in the Dick Tobias Classic, a 75-lap main event that pays $5,000 to the winner.

Joining the SpeedSTRs will be the Hyper Racing Wingless 600 Sprints and the All Star Slingshots. Pit gates open at 2 p.m. while the grandstand gates will open at 4:00. The Ernie McCoy grandstand dedication will take place at approximately 5 p.m. and warm-ups get underway at 5:15, with qualifying events immediately following the hot lap sessions.

Adult general admission is $20, with a discount for Senior Citizens. Children five-and-under are admitted free.

It will be a very busy week for the speedway, as the Goldie & Elton Meitzler Memorial Race takes place on Wednesday, May 17, just three days after the Tobias Classic. That event begins with warm-ups at 6:15 p.m.

It’s time to get back to the action at the JeffreyHogueRealtor.com Action Track USA on the Kutztown Fairgrounds…where the Superstars come to race!