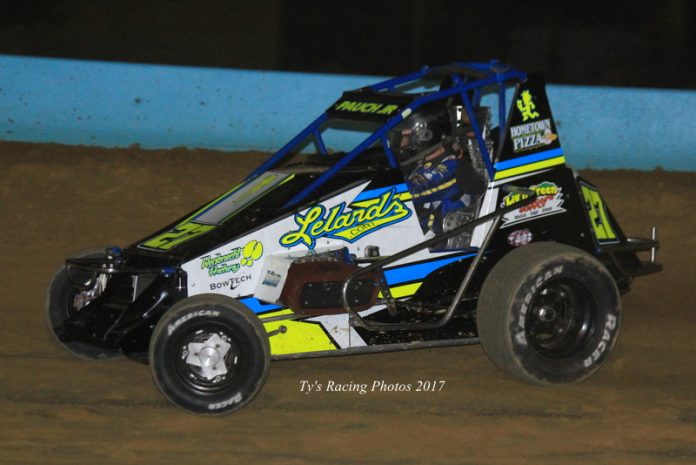 KUTZTOWN, PA – The 2016 racing season, at least at the JeffreyHogueRealtor.com Action Track USA on the Kutztown Fairgrounds, was not a good one for Billy Pauch Jr.

The New Jersey ace did not win a single USAC All Pro SpeedSTR feature and ran second or third so often in the Hyper Racing Wingless 600 Sprints that it became very frustrating for the third generation racer.

All that changed on Sunday night in the Mother’s Day edition of the Dick Tobias Classic.
Pauch Jr. had the lead, lost the lead, then finally reclaimed it near the end of the 75-lap Tobias Classic and held on to win the season opener at Action Track USA.

Joining Pauch in the winner’s circle was Alex Bright, who captured the Wingless 600 Sprint feature. The 20-lap main for the All Star Slingshots had to be postponed (due to curfew) and will be made up on Wednesday, May 17, as part of the Goldie & Elton Meitzler Memorial.
The Dick Tobias Classic for the SpeedSTRs was a topsy-turvy affair, with first place not the place to be for a few drivers. Pauch Jr. swept into the lead from his third starting spot on lap one. Heading to the stripe to complete lap 25, however, Pauch’s Heffner Motorsports No. 27 “twitched” badly in turn four, causing his mount to swerve right and climb the banking. Pauch went right across the nose of Tim Buckwalter’s car, forcing Buckwalter to roll to a stop and bring out the yellow.

“I tried to put a slide job on myself, if that’s possible,” laughed Pauch after the race. “I really messed up there and I hate that it messed up Timmy’s race, too. I apologized to him.”


That handed the top spot to Steve Buckwalter, but he was passed by James Morris on lap 28. Just two circuits later, though, Morris and his No. 13 suddenly slowed in turns three and four, coasting to a stop as S. Buckwalter and others roared by.

The incident placed S. Buckwalter back in front but all eyes were glued to Matt Westfall, as the Ohio driver zipped into fourth position after starting last (28th).

A caution with 48 tours complete served notice that it was time for the “break” in the long distance grind, where the drivers could get out and stretch, and of course the crews swarmed over their machines, making adjustments in full view of the large crowd that filled the grandstand. At the break, it was S. Buckwalter, Billy Pauch Jr., Mike Bednar, Westfall, and Reading’s Steve Drevicki.

When racing resumed, Steve Buckwalter once again set sail, although Pauch remained just a few car lengths behind as he battled with Mike Bednar for the runner-up position. With 54 complete, Buckwalter’ mount slowed dramatically on the homestretch and rolled to a stop in turn two.

Mike Bednar, who had just cleared Pauch to take over second a few laps earlier, now inherited the top spot. He and Pauch swapped the lead a few times after the restart and soon Doug Manmiller, who had to come from the rear after being involved in an early race incident, showed some impressive speed as he made it a three-way battle for the runner-up slot. Manmiller raced his way to second, but he spun out with just eight trips remaining after he clipped one of the large infield tires that line the inside of the race track.

Prior to Manmiller’s spin, Bednar and Pauch Jr. traded the lead several times with Manmiller joining the fun at the head of the pack. After Manmiller’s incident, it was up to Steve Drevicki to chase Pauch and keep him in his sights.

Pauch Jr. went on to win, followed by Drevicki, Matt Westfall, Bednar, and Jason Miller.
With 34 SpeedSTRs in the pit area for the Tobias Classic, the quick time award went to Tim Buckwalter. Heat race victories went to Manmiller, Bednar, and Pauch Jr. The two B-Mains were claimed by TJ Mayberry and Steven Nederostek.

Alex Bright, from Phoenixville, PA, started second in the Hyper Racing Wingless 600 Sprint feature, grabbed the lead at the outset, and was never headed.

Bright’s only close calls happened when lapped traffic refused to cooperate with the leader, slowing his pace and allowing Tim Buckwalter to close in on the leader. Some timely yellow flags saved the day for Bright, although they enabled T. Buckwalter to restart on the outside of Bright’s No. 70w. On each restart, Bright was able to get away from Buckwalter and the rest of the field.

Heat race winners included Buckwalter, Swavely, Morris, Chad Sandt,Tyler Ulrich, and Bright. A pair of D-Mains were contested with wins going to Eddie Strada and Jacob Ballet. The C-Main victories went to Robbie Hocker and Doug Snyder, while the B-Main winner was Mike Rutherford. An incredible field of 64 cars were signed in for wingless 600 Sprint competition on Sunday.

The JeffreyHogueRealtor.com Action Track USA swings open its gates once again on Wednesday, May 17 for the Goldie and Elton Meitzler Memorial. Warm-ups beging at 6 p.m. with heat races following immediately after warm-ups. The USAC All Pro SpeedSTRs will headline the show with the wingless 600’s presented by Hyper Racing also on the card and now there will be (2) two features for the All Star Slinghots; the one from Sunday night and the regularly scheduled main that will take place on Wednesday.

Sunday’s car counts were as follows: SpeedSTRs – 34; Wingless 600 Sprints – 64; and All Star Slingshots – 42. That’s a total of 140 cars in only three different divisions!
Follow the speedway on Twitter and Instagram @actiontrackusa. On Facebook, search for Facebook.com/ActionTrackUSA.