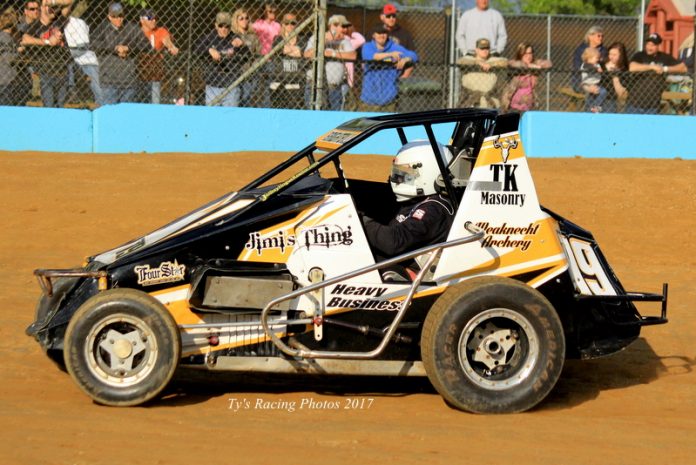 KUTZTOWN, PA – The news has been making the rounds for a few months now…this is Kenny Brightbill’s 50th, and likely his last, season behind the wheel of a racecar. The Berks County bred racer also figured he’d never again strap into a dirt Modified, as he committed to just running his SpeedSTR in 2017, but plans have a way of changing…

On Thursday, May 25, Brightbill will once more – and quite possibly for the final time – climb into a Modified. He will drive one of Keith Coulbourne’s cars in the Short Track Super Series South event at Delaware International Speedway. Delaware International Speedway is the facility where Brightbill scored his last Modified victory in 2010. He recorded five feature wins and the point championship that season.

Thursday’s start will mark the second straight night of competition for the 67 year-old Brightbill, who will also race his No. 19 SpeedSTR at the JeffreyHogueRealtor.com Action Track USA in Kutztown, Pa. on Wednesday night. The Action Track USA program is a big one, too, as the speedway plays host to A Night At The Races With Weaknecht Archery, featuring a pre-race autograph session with Brightbill and Modified star Jeff Strunk.

The on-track activity will see the USAC All Pro SpeedSTRs in action along with the All Star Slingshots, plus it’s the King of No Wing Shootout for the Hyper Racing Wingless 600 Sprints. The 600’s will compete in a 40-lap main event that could be worth $1,000 to the winner (with Gambler’s Challenge).

Wednesday’s event begins at 6 p.m. with warm-ups, the 600 Sprint Mad Scramble, and Timed Dashes for the SpeedSTRs. Qualifying heats will immediately follow the Timed Dashes and hot lap sessions.


Kenny Brightbill’s 50th Anniversary Season is being celebrated with a very special T-Shirt, designed and distributed by Bob Hilbert Sportswear. The T-Shirt, featuring many of the cars driven by Brightbill during his illustrious career, will be on sale at both Action Track USA and at the STSS South event at Delaware International Speedway.