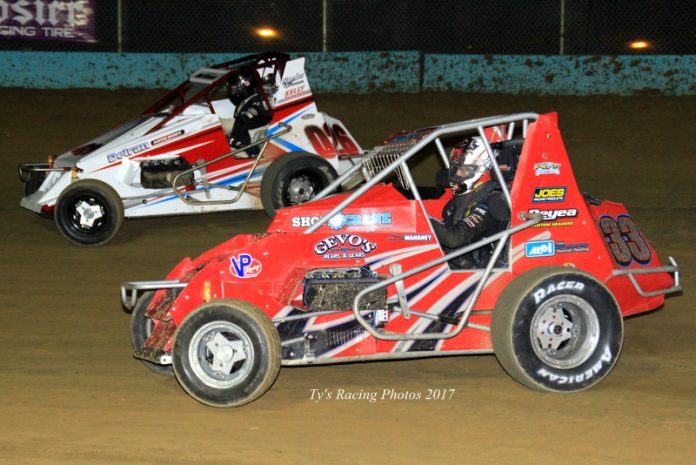 KUTZTOWN, PA –  Mike Mahaney of Kings Ferry, NY dropped a new engine in his USAC All Pro SpeedSTR around 1 p.m. on Wednesday afternoon. Roughly eight hours later, he was standing in Weaknecht Archery Victory Lane at the JeffreyHogueRealtor.com Action Track USA after the fourth feature win of his career at the Berks County oval.

Joining Mahaney in the winner’s circle on A Night at the Races with Weaknecht Archery were Kyle Spence, who triumphed in the Hyper Racing 600 Sprints King of No Wing Shootout, and All Star Slingshot victor Seth Spayd from Shillington, PA.

“After the week I had last week, this is especially sweet,” smiled Mahaney during his victory lane interview. “I flipped my Modified and blew the engine in the SpeedSTR. It was not a good week at all, but it makes this win so much more satisfying. I almost gave it away, though…did you see me bicycle over there in (turn) two? I love coming down here to race; the track is always real racey and there’s always a big crowd, and the crowd is really into it. So thanks to all the fans for coming out,” said Mahaney to a huge cheer from the spectators.

The second generation driver had to work hard for his victory, as he tried time and time again to wrestle the top spot from front row starter Jeff Hartman. Hartman led (almost) the entire first half of the 30-lapper, while Mahaney threaded his way from fifth on the grid to run second over Brad Brightbill by the time lap ten was scored.


After several attempts to take the lead from Hartman, Mahaney finally zipped around the bottom of turns one and two on a restart with 14 tours completed, then slid up in front of Hartman as they accelerated onto the backstretch. He had the lead, but the race was far from over…

Ninth-starting Tim Buckwalter, the previous week’s Meitzler Memorial Race winner, weaved his way to third just past the halfway point. Buckwalter then disposed of Hartman with seven to go, setting his sights on race leader Mahaney. The two throttle-jockeys waged an epic battle over the final seven trips around the clay with Buckwalter trying high and low to pull alongside Mahaney’s Shop Crane Equipment No. 33.

Mahaney repelled every challenge and beat Buckwalter to the checkered by less than one-quarter of a second (0.208 seconds). Matt Janisch finished third for the second straight week after battling with Steven Nederostek for most of the race. Nederostek wound up fourth and Billy Pauch Jr., who slid far back in the field in the early going, rallied for a fifth place payday.

The Hyper Racing Wingless 600 Sprints took part in the annual King of No Wing Shootout, a 40-lap affair that has produced some wildly intense racing over the past few years. And Wednesday’s edition did not disappoint, either, as it was chock full of three and four-wide activity and lots of ebbs and flows during the long distance event.

Danny Buccafusca, the “Rockaway Rocket” from New Jersey, set the early pace with Tommy Kunsman and Mike Rutherford duking it out for the runner-up position. Three caution periods, each spaced about seven or eight laps apart from one another, dotted the first 18 circuits and temporarily slowed the incredible, multi-car slider-fest that kept the fans on the edge of their seats.

Kunsman slowly pulled away from Rutherford and moved in to challenge Buccafusca. But Kunsman had to be a bit defensive, too, because opening night winner Alex Bright, Eddie Strada (the defending King of No Wing winner), Brandon Azzalina, Rutherford, and now Kyle Spence were using every inch of the progressively banked speedway and trading positions lap after exciting lap.

Tommy Kunsman eventually made the most of his opportunities to snatch the lead from Buccafusca. On a restart with 21 complete, Kunsman rode the bottom groove to the lead, and Spence, who took the original green in tenth, followed him into the runner-up spot. On lap 25, Spence, from Bear, DE, powered past his good friend Kunsman to take the top spot as they blasted down the front chute and into turn one.

Spence managed to pull away over the final ten tours, but the action behind him remained fierce. Alex Bright passed Kunsman for second and Billy Pauch Jr. was making a big charge from the back of the pack into the top five.

When the checkered flag waved, Spence was $1,000 richer (he took the Gambler’s Challenge, thereby increasing his winner’s share) as he crossed the stripe with a comfortable margin over Bright. Kunsman, who won the Mad Scramble (a race for the previous week’s non-qualifiers) on Wednesday, transferring directly to the feature as a result. After leading four laps, Kunsman had to settle for a third place pay envelope. Pauch Jr. and B. Azzalina rounded out the top five.

Seth Spayd celebrated his 17th birthday on Wednesday by winning the All Star Slingshot feature. But it was a nine year-old who stole the crowd’s hearts…and almost stole a victory.

Tanner VanDoren, just beginning his second full season of Slingshot competition, took off with the early lead and it wasn’t long before defending track champion (and two-time National Slingshot Champion) Dylan Hoch sliced his way from 12th to second. Hoch pulled even with VanDoren but young Tanner held his ground, fending off Hoch’s challenge.

Spayd, who started the race in 11th, shot past Hoch to snare the runner-up spot on the eighth revolution. VanDoren held him off, too, for two laps before Spayd muscled by and into the lead at the halfway point of the 20-lap feature.

A total of 113 cars took part in A Night at the Races with Weaknecht Archery. There were 31 SpeedSTRs, a whopping 58 Wingless 600 Sprints, and 24 All Star Slingshots.

Billy Pauch Jr. was the quickest of the SpeedSTRs in the Timed Dashes, with teenager Briggs Danner setting second fastest time. Both drivers transferred directly to the main event as a result of their times.

The Hyper Racing Wingless 600’s began their night with the Mad Scramble, a race for the previous week’s non-qualifiers where the winner moves to the main event. Tommy Kunsman was the Mad Scramble winner on Wednesday.

Six heat races were needed to pare down the large field, and the six winners were Alex Bright, Eddie Strada, Danny Buccafusca, Jay Hartman, Jason Swavely, and Tim Buckwalter. The C-Main winners included Damon Paul and Joe Kay, while Kenny Miller III captured the B-Main. It should be noted that Damon Paul qualified through the B-Main as well, so the youthful charger from Stoney Point, NY ran the alphabet on Wednesday, going from the C to the B to the A-Main, where he finished 16th.

Freddie Rahmer Jr., driving Dave Bodine’s No. 99, rode out a wild flip in the 600 Sprint B-Main. Rahmer appeared to get pinched into the outside wall on the backstretch, launching his car into a series of barrel rolls. Rahmer quickly crawled out of the upside-down car and walked away.

Weaknecht Archery is your one-stop shop for all your archery hunting questions and needs. They are located at 159 Kutz Mill Road in Kutztown, PA. They offer very competitive pricing and unparalelled service, making Weaknecht Archery the place to go for archery equipment and supplies. You can also check them out online at www.weaknechtarchery.com.

On Wednesday, May 31, Action Track USA will honor all First Responders, who will get in for free when showing a valid I.D. It’s also Glick Fire Equipment NIght with a fire truck on display and live demonstrations all night long.

The USAC All Pro SpeedSTRs, Hyper Racing Wingless 600 Sprints, and the All Star Slingshots will be joined by the Junior Slingshots, who will be making their first appearance of the season at the Kutztown oval.

Come get your midweek motorsports adrenaline rush at the JeffreyHogueRealtor.com Action Track USA…where the superstars come to race!