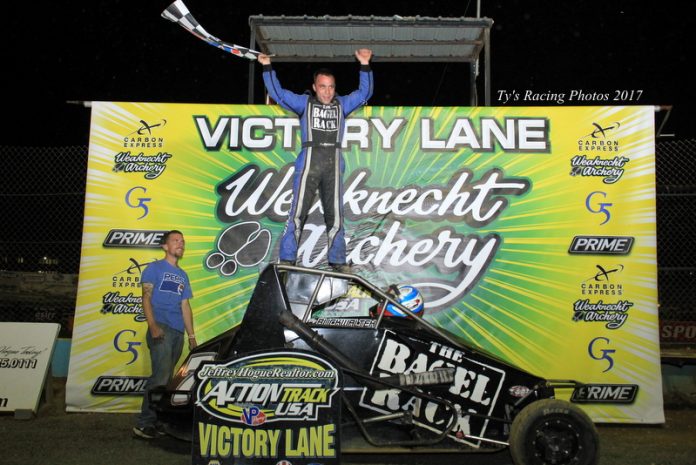 KUTZTOWN, PA – Wednesday night was First Responder Night presented by Glick Fire Equipment, and the competition was certainly hot and heavy at the JeffreyHogueRealtor.com Action Track USA on the Kutztown Fairgrounds. When the sparks died down and the smoke cleared, Tim Buckwalter claimed his second victory of the young season in the USAC All Pro SpeedSTR division.

Jimmy Glenn was the apparent victor of the Hyper Racing Wingless 600 Sprint feature, but Glenn was later disqualified based on the results of post-race technical inspection. Billy Pauch Jr., who chased Glenn to the checkered flag, was declared the winner.

Reading’s Matt Miller drove his No. 16m to the All Star Slingshot triumph, his first at Action Track USA since 2014. Joining Miller as a Slingshot winner on Wednesday was Reese Nowatarski of Reading. Nowatarski captured the Junior Slingshot victory.

The Glick Fire Equipment 30-lap main event for the USAC All Pro SpeedSTRs was a highly competitive affair that featured three different leaders and a late race battle for second that had the large crowd roaring with delight.

Mike Bednar, driving Brandon Auman’s No. 2, jumped to the early lead over Jason Rochelle. Fifth-starting James Morris zipped past Rochelle and into the runner-up spot by lap two, and one circuit later Tim Buckwalter, who lined up tenth on the starting grid, charged to the third position.

On the fourth trip around the clay, Morris got into the back of Bednar’s mount, and the Whitehall, Pa. driver got just loose enough to allow Morris to shoot down off the turn four banking and grab the lead. Bednar got a run on Morris at the opposite end of the race track, but bumped Morris’ No. 13 and lost his momentum as well as the runner-up slot, with Buckwalter slipping past him in turn two.

On a lap ten restart, Buckwalter shot past Morris to gain control, and from that point on, the Pottstown, Pa. wheel-twister maintained a firm grip on the top spot. When 11th-starter and current point leader Billy Pauch Jr. weaved his way into third, however, is when the real fun began as he began his assault on Morris.

The last 11 tours of the race were highlighted by the fantastic slide-fest between Pauch Jr. and Morris. Pauch threw slider after slider on Morris, and James deftly crossed him over and dashed back past the Heffner Motorsports No. 27 as they exited the corners and raced down the straightaways. On a few occasions, Morris rolled the top to perfection and Pauch wasn’t able to execute a slide job but sliders ruled on most laps – they just were not successful as Morris defended his position each time.

Buckwalter sped across the finish line after 30 laps to record his second win of the season and his seventh Action Track USA SpeedSTR triumph. That moves him within three of the career win leaders (in SpeedSTR competition) at the Berks County oval, as father and son Pauch (Billy Sr. and Billy Jr.) are tied at the top with ten career victories.

“Paul (Lotier) and the whole crew just do a tremendous job preparing this car, and the track was really good for the feature,” said Buckwalter in Weaknecht Archery Victory Lane. “And you know Amanda, my girlfriend, is pregnant so we really need the money that we get for winning,” stated a grinning Buckwalter.

In the Hyper Racing Wingless 600 Sprint main, Matt Roselli snatched the lead from pole sitter Nate Brinker as the 25-lapper went green. Eddie Strada was on the move early, rumbling from eighth on the grid to third by the time three laps were scored.

On a lap four restart, New Jersey’s Jimmy Glenn blasted by Roselli to grab the lead while Strada and Roselli dueled for second. The second caution flag waved with six circuits complete, and the next seven revolutions produced some of the most exciting racing of the season.

With Glenn out front, Jason Swavely launched off turn two, shooting the narrow gap between Strada and Roselli and moving to the runner-up position. A half-lap later, 11th starter Tim Buckwalter made a bonzai dive under all three to snare second place. As the race neared its mid-point, Billy Pauch Jr. (started 10th), Alex Bright (started 23rd), and James Morris (started 19th) were picking their way through intense traffic and moving forward into the top six.

After a yellow flag at the halfway mark, the top five of Glenn, Buckwalter, Swavely, Pauch Jr., and Bright were under a virtual blanket and using every inch of the speedway to get around one another.

Glenn slowly and steadily pulled away from his pursuers, and Buckwalter slowed suddenly with mechanical issues in turn three and four on the final lap, giving up second place to Pauch.

At the finish, it was Jimmy Glenn who seemingly notched his first-ever Action Track USA triumph. Unfortunately, his No. 7G did not pass the post-race technical inspection, resulting in a DQ and handing the victory to Pauch Jr. It was the first 600 Sprint win for Pauch since the season opener in May of 2015.

“The Thriller” Matt Miller started on the outside of row one in the All Star Slingshot main, but Miller quickly gassed his No. 16m into the lead as the green waved to begin the feature. Miller would go on to lead the entire 20-lap distance, but it was not a walk in the park by any means.

On several occasions, Alex Yankowski motored to the inside of the race leader and appeared primed to take over the top spot. On a couple of the race’s restarts, he actually did move in front, but yellow flags waved at the wrong times (for Yankowski, anyway) and negated his passes and bids for the lead.

Near the end of the race, Dakota Kohler, in his strongest outing of the still-early campaign, wrestled the runner-up slot from Yankowski. Kohler made one last run at the leader on the final trip around the progressively banked oval, but Miller held him off to score the triumph by 0.178-seconds.

The Junior Slingshots made their first appearance of the year at Action Track USA on Wednesday, and Reese Nowatarski ended a few seasons of bridesmaid and podium finishes by winning his first feature at the speedway located across the street from Kutztown University.

Driving the family-owned Specialty Rigging No. 10x, Nowatarski completed a clean sweep of the Junior Slingers’ races by winning both the heat race and the 15-lap main event. The young charger led all the way in the feature, crossing the stripe by more than one second over Tyler Ulsh.

Action Track Sidebites:
Quote of the Night: “I didn’t even know you could throw a slide job in a SpeedSTR…but Billy (Pauch Jr.) sure proved that you can. That was a lot of fun…” deadpanned James Morris after his torrid duel with Pauch in the SpeedSTR feature.

Tim Buckwalter and Pauch Jr. were the quickest SpeedSTRs in that group’s time dashes, locking themselves into the main event as a result. Winning SpeedSTR heat races were Doug Manmiller, Jason Rochelle, and Morris. The B-Main was captured by Matt Janisch.

Three throttle-jockeys who came a long way in the 600 Sprint main deserve a shout-out: Tommy Kunsman took the original green in 24th and finished sixth; Doug Snyder flipped in the B-Main, was added as a provisional starter and took the green from 26th He drove his wounded car, the Ben Fisher No. 65 to an incredible seventh-place finish! And Rob Pajauis, who won the C-Main and just missed transferring through the B-Main, was also added as a provisional starter. He wound up eighth after rolling off the staging lane in 27th position.

Timed Dashes were utilized for All Star Slingshot qualifying on Wednesday, and Alex Yankowski set quick time as the fastest 18 drivers locked into the 20-lap feature. Marc Daniels and Brett Bieber were second and third on the speed chart in the Timed Dashes. Kyle Smith won the last-chance B-Main.

Glick Fire Equipment had a huge ladder truck on display behind the grandstands. Glick Fire Equipment, now in its 30th year, is the state’s leader in sales and service of fire trucks, ambulances, and other vehicles used by First Responders. See their full line of emergency response equipment at www.glickfire.com.

This Wednesday, June 7, will be the annual Flyin’ Farmer 40 for the SpeedSTRs, a 40-lap main event paying $3,000 to the winner! It’s Action Track USA’s tribute to the late, great Tommy Hinnershitz of nearby Oley, PA, who was known throughout his stellar Sprint Car and Midget career as “the Flying Farmer”.

The Hyper Racing Wingless 600 Sprints will join the USAC All Pro SpeedSTRs and the All Star Slingshots on this week’s card. It will be FFA Night at the speedway, and the Old Time Plowboys will have their antique tractors on display and on the race track for an exhibition. Fans are invited to wear their best farmer apparel; the fans looking most like they are ready to milk the cows or bale some hay will be invited to victory lane for photos with the winner of the Flyin’ Farmer 40.

Come get your midweek motorsports adrenaline rush at the JeffreyHogueRealtor.com Action Track USA on the Kutztown Fairgrounds…where the superstars come to race!