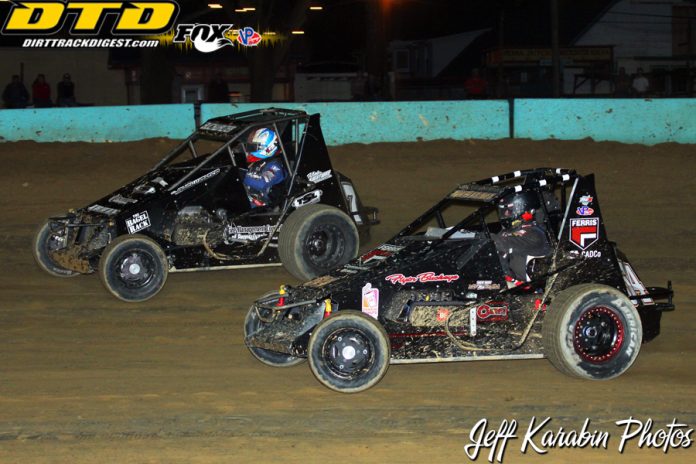 KUTZTOWN, PA –  Just in case folks could not see it over the past few years, this Tim Buckwalter fella is making two things perfectly clear this season: 1) he is pretty doggone talented, no matter what type of racing machine he is buckled into and; 2) he sure knows the fast way around the JeffreyHogueRealtor.com Action Track USA on the Kutztown Fairgrounds.

On Wednesday night, Buckwalter competed in four of the five feature races that made up the fifth annual Ronnie Tobias Memorial. At the end of the sweltering night, the Pottstown wheel-twister had recorded two wins, a runner-up effort, and a fifth-place finish…not too shabby. And two of those results (one of the victories and the fifth-place posting) came in a car that he does not normally campaign at the Berks County oval – or anywhere else, for that matter.

Driving Paul Lotier’s Bagel Rack No. 7, Buckwalter chased Steve Drevicki to the checkered flag in the first of Twin 20’s

for the USAC All Pro SpeedSTRs. He moved up one spot in the second 20-lapper, winning his fourth feature of the season in the SpeedSTR class.

In the Twin 17-lap mains for the Hyper Racing Wingless 600 Sprints, Buckwalter drove Tom Frashetta’s No. 12 because his regular ride, the Greth Racing No. 71, was loaded up and ready to roll to Indiana, where Buckwalter will steer it in a big race this weekend. He bolted to his second straight 600 Sprint triumph in the first feature, then drove to a fifth-place finish in the nightcap as Jason Swavely registered his very first Action Track USA victory.

Jared Silfee of Saylorsburg, last year’s Junior Slingshot Champion at Action Track USA as well as the Junior National Champion, captured the $600 victory in the All Star Slingshot division on Wednesday. Silfee was greeted in Victory Lane by Slingshot race sponsor Daryl Tillman of Team ReMax of Reading.

SpeedSTR feature #1 had Tom Mayberry grab the early lead, while Ray Nemeth and Steve Drevicki fought for second. Drevicki, from Reading, snatched the runner-up position from Nemeth and set his sights on Mayberry. Drevicki got to the inside of Mayberry, then throttled by him to grab the top spot as they exited turn two on lap four.

Buckwalter marched from 12th starting position to run third by the halfway point. He took over second just past the halfway mark, closed in on  the leader immediately, but could not mount a serious challenge. On the final revolution, Buckwalter drove deep into turn three, but was unable to execute the slide job that it would have taken to grab the top spot.

In the second of the Twin 20’s for the SpeedSTRs, it was Allentown’s Briggs Danner jumping to the early lead over Matt Westfall. A couple of early race cautions kept things close with Danner maintaining the number one position.

Eighth-starting Tim Buckwalter was the car on the move, rumbling up to the third position before taking second from Hartman. Buckwalter looked high and low to try and get by the leader, then executed a single-car slide job in turns one and two to grab the lead with five laps remaining.

At the finish, it was Buckwalter over Westfall, who took second from  Danner with just a couple of laps remaining.

The first feature of the night for the Hyper Racing Wingless 600 Sprints was highlighted by one heckuva battle from second on back. With Will Butler in command it was Buckwalter, Jay Hartman, Danny Buccafusca, Billy Pauch Jr., and Alex Bright all battling for second through sixth.

Buckwalter eventually cleared that tussle and pulled right up on Butler’s bumper. With Buccafusca still in the mix as well, the trio waged an eye-popping battle royale for the top spot.

The only slowdown period of this race occurred with five down. When it came down to crunch time, Buckwalter was THE Man. Tim grabbed the top spot after he and Will Butler traded numerous slide jobs on one another.

The race only took 6:18.147 to complete, and when the checkered had fallen, it was Buckwalter scoring his second consecutive 600 Sprint victory over a fast closing Jay Hartman. Alex Bright settled for third with Buccafusca and Brandon Azzalina completing the top five.

The final race of the night – for the 600’s – went non-stop, green to checker. Jason Swavely, after numerous attempts and near-misses, finally found his way to Victory Lane in Kutztown. Swavely had quite a night, too, as he did not qualify in his heat race. He went to the C-Main where he finished third (only four cars went to the B-Main from the C-Mains). In the B-Main, Swavely came from near the back to finish fourth and qualify for the features. He started 22nd and finished seventh in the 600’s first main event.

Will Butler and Tommy Kunsman battled early in this one with Butler gaining the advantage after a few laps. Swavely closed on the leader, tussling with Buccafusca and Butler before Jason was able to grab the lead on the ninth trip around the clay. Billy Pauch Jr. entered the top five, picking off one car at a time and moving up to second. By the time he got there, however, Swavely had pretty much checked out.

At the finish, it was Jason Swavely, from Birdsboro, notching his first career Action Track USA victory in non-stop fashion. Pauch Jr. settled for second, with Will Butler, Danny Buccafusca, Tim Buckwalter racing home in sixth.

The All Star Slingshots competed in a 40-lap feature with 37 cars (everyone who entered Wednesday’s Slingshot portion of the program) starting the race and $600 going to the winner, courtesy of Daryl Tillman Team ReMax of Reading.

There was contact in the corner, Silfee came out ahead, and both Carraghan and Daniels, while they got squirrely as they banged off one another, were able to straighten out their mounts and continue.

Dylan Hoch came from 18th to run second, but Silfee was long gone by the time he got there. Carraghan recovered to finish third with Marc Daniels fourth and Alex Yankowski completed the top five.

Will Butler won the Pioneer Pole Buildings wingless 600 Mad Scramble for drivers who did not qualify for last Saturday’s main event.

Hard Luck Awards (some cash to ease the pain) were presented on Wednesday by members of the Race Chaser Group. The Race Chasing Decal Fund gave a Hard Luck Cash Award to Steve Buckwalter for his misfortune in the SpeedSTR division, while Slinger Warehouse handed out the Slingshot Hard Luck money to Lindsey Garl.  Garry Gollub presented 600 Sprint driver Jimmy Glenn with the Hard Luck stipend for that class.

There is no racing at Action Track USA on Wednesday, June 28 and on July 5th. We return to begin the second half of the 2017 racing season on Wednesday, July 12, with the running of the series finale of the Tri-Track Challenge. The Challenge is a three race miniseries (for the 600 Sprints) between Action Track USA, Linda’s Speedway, and Lanco’s Clyde Martin Memorial Speedway.

The Tri-Track Challenge will pay a driver $1,000 to win provided he/she takes the Gambler’s Challenge.

The July 12 event will find the Checkered Flag Fan Club in attendance and the whole program is being presented by AEI Enterprises.

The reason for the “no racing” over the next two Wednesdays is because the Kutztown Folk Festival takes over the fairgrounds.

Racing returns to the JeffreyHogueRealtor.com Action Track USA on July 12 with the Tri-Track Challenge for the 600 Sprints, and it’s presented by AEI Enterprises. Come get your Midweek Motorsports Adrenaline Rush…at Action Track USA…where the Superstars come to race!