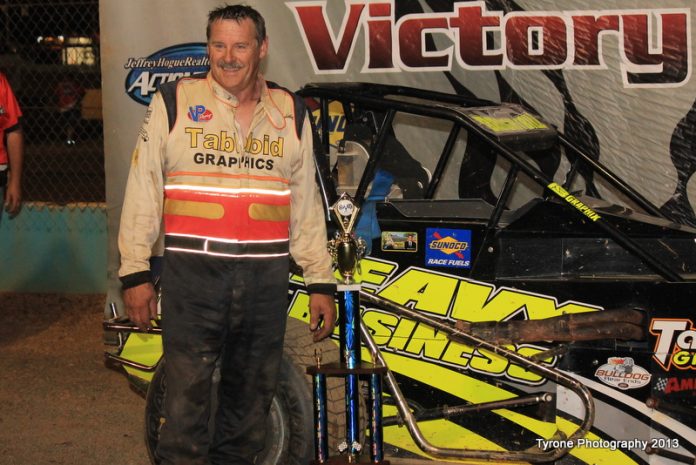 KUTZTOWN, PA – He is one of the best race drivers – ever – to come from Berks County, and certainly one of the top drivers in history to hail from Pennsylvania. And, on Wednesday, July 19 (fitting because for many years, that was and is currently his car number) the JeffreyHogueRealtor.com Action Track USA on the Kutztown Fairgrounds is planning to honor Kenny Brightbill.

On July 19, before the races begin, Brightbill will be seated behind the grandstand, signing autographs and posing for photos with his many fans. The Sinking Spring driver will also have his 50th Anniversary T-shirts on sale, as he does each week during the 2017 racing season, which he says will be his last behind the wheel.

There are plans to have Kenny compete in a match race that night, too, against his sons Brad and Keith.

With 441 victories at 41 different speedways during his illustrious career, along with numerous point titles, Brightbill has become a living legend in the motorsports community as well as in his native Berks County.


He ruled the Reading Fairgrounds half-mile oval during its final ten years of existence, notching 135 feature wins at the Home of Champions. And he can still get the job done today, as he’s proved in the five year history of Action Track USA.

He was the first point champion in Action Track USA’s SpeedSTR division (in 2013), and in 2015 he was voted the track’s Most Popular Driver by its fans. Just a few weeks ago, on June 14, Brightbill led the first 20 laps of the SpeedSTR main event. He was passed by Jeff Hartman on a restart, but battled furiously with Hartman and Tim Buckwalter over the final ten circuits before settling for a second place finish.

In addition to greeting his fans and the match race against his sons, Brightbill will also be competing with the USAC All Pro SpeedSTRs on July 19. The Hyper Racing 600 Sprints will be on the card, too, along with the All Star Slingshots.