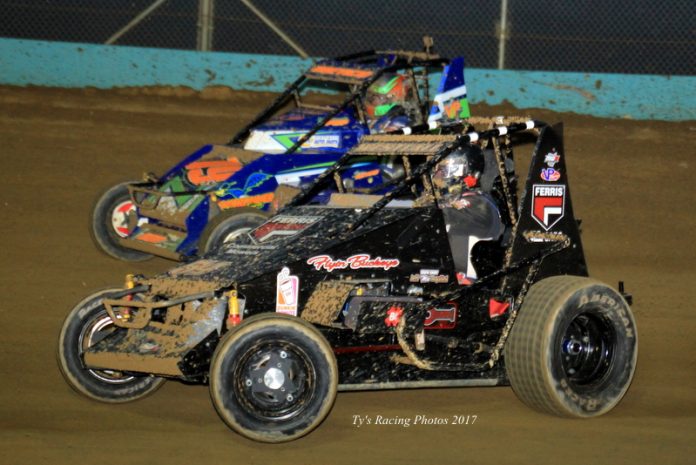 KUTZTOWN, PA –  He’s been fast and a consistent top-five finisher during the first half of the season, but the Flyin’ Buckeye, Matt Westfall, just couldn’t catch the right breaks to put his No. 54 into Victory Lane at the JeffreyHogueRealtor.com Action Track USA on the Kutztown Fairgrounds. As the campaign’s second half began on Wednesday night, however, Lady Luck finally grinned on Westfall, and his first career win in a USAC All Pro SpeedSTR became a reality.

“We’ve been quick, but had the car way too tight for most of the races. Then, at the last race (on June 21), we finally got if freed up, but it was too loose. Tonight, we hit it right on the money and got the win. Tough break for the 56 though…it was his race until he had problems,” summed up Westfall, who took the winner’s share of the purse back home to Pleasant Hill, Ohio.

The 56 he was referring to was Steve Buckwalter, the race leader until he suffered a broken gear in the rear end of his machine, forcing him to slow and pull off the track with just three laps remaining in the AEI Equipment & Services 30-lap feature race for the SpeedSTRs. Buckwalter’s misfortune handed the top spot to Westfall, and he kept the Milt Aquilini-owned, Ferris Mowers No. 54 out front over the final few laps to secure the victory.

Westfall was indirectly aided by Tim Buckwalter, who pulled alongside runner-up Billy Pauch Jr. with two to go and battled Pauch right down to the checkered flag, allowing Westfall to pull away by a few car lengths.


“I love flying in here on Wednesdays and racing Milt’s car…this is one bada_ _ race track and the racing is awesome. We’ve struggled with our Sprint Car deal back home, this year, so this (win) is a big boost for me,” said Westfall, who started tenth. As the fierce racing in front of him sorted itself out, he jumped to the high groove and moved into fourth position during the middle stages of the race. Staying committed to the outside line, Westfall zipped past Pauch and Hoch to claim second on the same restart, with seven to go, that Steve Buckwalter used to grab the lead.

Pauch nipped T. Buckwalter for runner-up honors by less than one-tenth of a second. “I was good down low tonight, but had to run the top at the end,” explained Pauch, a two-time SpeedSTR point champion at the Berks County oval. “Circumstances just didn’t go our way tonight, but we still came out of it with a good solid finish.”

Tim Buckwalter, the current point leader and four-time winner this season, had a tough time getting through traffic after starting 11th. “The track was real good, making it tough to pass because everybody was fast.”

With his third place finish, Buckwalter increased his lead in the standings to 155 over Westfall, who used his victory to jump over Pauch Jr. and into second place in the point chase. Pauch fell to third, but is just 15 points behind Westfall.

Mike Bednar ran a steady race to finish fourth, barely beating Dylan Hoch to the stripe. Hoch, in his best-ever SpeedSTR outing, led the first 23 circuits before Steve Buckwalter got by him on a restart. Although he faded a bit over the last seven tours, Hoch hung on for a top five finish. Tom Mayberry, Tyler Ross, Steve Drevicki, Stephen Nederostek, and Matt Janisch completed the top ten.

The Hyper Racing 600 Sprints competed in the second leg of the Tri-Track Challenge, a three race mini-series between Action Track USA, Lanco’s Clyde Martin Memorial Speedway, and Linda’s Speedway. The first race, won by Kyle Spence, was held on July 1 at Clyde Martin. The Tri-Track finale` will take place this Friday, July 14, at Linda’s Speedway in Jonestown, PA.

Fleetwood’s Jason Swavely notched his second straight wingless 600 feature win at Action Track USA, and he tied Spence for the Tri-Track point lead in the process.

With Eddie Strada leading James Morris in the early stages of the 25-lap feature, the cars on the move were driven by Tim Buckwalter and Swavely. Buckwalter blasted from his eight-starting position to run  fourth by the time lap three was scored, and Swavely moved from sixth to third in the first three trips around the clay. The first caution of the race came with three revolutions in the books, and when it went back to green, both Swavely and Buckwalter pounced on the opportunity to dance with Strada for the top spot.

Buckwalter, who is also leading the 600 Sprint point standings, fell out of the race with 11 laps complete. Opening night winner Alex Bright also pulled to the infield at the same time. Their demise moved Spence and Jim Radney to third and fourth.

Swavely continued to hound Strada, finally squeezing up in front of the No. 36D to wrestle the lead away as they launched off turn two and onto the backstretch with ten to go. Spence muscled his way past Strada for second place on a restart with eight tours remaining.

Swavely won handily, crossing the line 1.170-seconds ahead of Spence. Radney wound up third to stay in contention for the Tri-Track Challenge title, worth $200 and a brand new right-rear tire from Hoosier Racing Tires.

Strada took the checkered in fourth and 20th starter Danny Buccafusca, who celebrates his 18th birthday on July 14, finished an impressive fifth.

Damon Paul captured the win in the Pioneer Pole Buildings Mad Scramble, earning a cash bonus from Hosensack Poker Club and a spot in the feature. Alex Bright, Strada, Radney, and Spence triumphed in the qualifying heats as the Hyper Racing 600 Sprints pulled a field of 39 for the Tri-Track Challenge. Kenny Miller III won the C-Main and Robbie Hocker took the win in the B-Main. Hocker went on to finish eighth in the main event, while Miller started 26th and soldiered to a seventh place payday behind sixth place Austin Quick.

Austin Stufflet led the opening lap of the All Star Slingshots’ 20-lap feature before Dakota Kohler slipped past him to set the pace from laps two through five. Seth Spayd passed Kohler on a restart with five down but Spayd, bidding for his third victory of the season, would soon have company in the form of Dave Carraghan from Emmaus, PA.

Carraghan harrassed Spayd and finally took the lead on the home stretch at the halfway point. Carraghan went on to record an emotional victory as his first triumph of the 2017 campaign came exactly one year after his father’s passing. Carraghan also won the Slingshot feature at Action Track USA on July 20, 2016, which was his first race after losing his dad.

Thirty Slingshots signed in for competition on Wednesday. Heat race winners included Dakota Kohler, Travis Bieber, and Seth Spayd. The B-Main victory went to Tanner Van Doren. Joey Vaccaro won a special Mad Scramble for the Slingshot drivers who did not qualify for the 40-lap feature on June 21.

The JeffreyHogueRealtor.com Action Track USA wishes to thank the evening’s sponsor, AEI Equipment Service of Tamaqua, PA. A division of Ankiewicz Enterprises, AEI Equipment offers a top line of manufacturers of construction and excavation equipment. The equipment may be purchased or rented from AEI.

On Wednesday, July 19, Action Track USA will honor its very first SpeedSTR point champion, Kenny Brightbill, and recognize his 50 years of driving race cars. Prior to the races, and periodically throughout the night on Wednesday, the 2015 Most Popular Driver recipient will sign autographs and pose for photos at a table behind the grandstands. In addition to competing in his SpeedSTR that night, Brightbill will also take on his sons, Brad and Keith, in a three-lap match race. He will also have his great looking 50th Anniversary T-Shirts on sale at the event.

Kenny Brightbill Night begins – on the track – with warm-ups, Mad Scramble, and Timed Dashes at 6:15. Heat races will follow the hot lap/ Mad Scramble/ Timed Dashes. The Junior Slingshots will make their third appearance of the season, joining the USAC All Pro SpeedSTRs, the Hyper Racing 600 Sprints, and the All Star Slingshots.

For your midweek motorsports adrenaline rush, and to help celebrate Kenny Brightbill’s 50th (and final) season in racing, come on out to the JeffreyHogueRealtor.com Action Track USA on the Kutztown Fairgrounds on Wednesday, July 19!