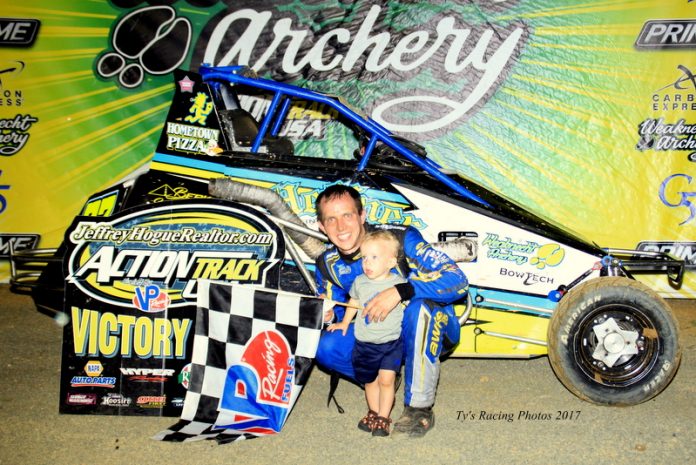 KUTZTOWN, PA – One could not help but notice that there was a special vibe, a certain magical feeling in the air on Wednesday night at the JeffreyHogueRealtor.com Action Track USA on the Kutztown Fairgrounds.

It was Kenny Brightbill Appreciation Night, and his legion of fans turned out in droves to help the “Shillington Slingshot” celebrate his 50th (and most likely, his final) year of driving race cars. It’s surprising that Brightbill could even grip the steering wheel of his No. 19 SpeedSTR because his hand had to be cramping from signing so many autographs during the evening’s festivities.

Always known for his toughness behind the wheel, Brightbill did race on Wednesday. He was collected in a few tangles during the 30-lap main for the SpeedSTRs, but survived to finish fourth as Billy Pauch Jr. earned his second win of the season. The triumph propelled Pauch Jr. into the number one position as Action Track USA’s all-time feature winner in the SpeedSTR division, breaking a tie with his dad, Billy Sr. “The Kid’s Kid”, Pauch Jr. now has 11 SpeedSTR wins at the Berks County oval, one more than his dad and just two more than third-place Tim Buckwalter.

“It’s pretty cool to win on Kenny Brightbill Night,” said Pauch in victory lane. “He was one of my heroes growing up; he and my dad had some great battles over the years. He’s one of the greats, so it’s an honor to win on his night and in front of such a great crowd.”
Eddie Strada, from Lake Ariel, Pa., notched his second win of the season in the 25-lap feature for the Hyper Racing 600 Sprints in an exciting, rim-riding exhibition that saw him narrowly defeat point leader Tim Buckwalter.


Kunkletown’s Tanner VanDoren led wire to wire to capture his first All Star Slingshot victory at Action Track USA. And Reading’s Reese Nowatarski made it three wins in three 2017 appearances in the 15-lap main for the Junior Slingshots.

Steve Buckwalter shot to the lead in the USAC All Pro SpeedSTR main event, with Steven Nederostek on his tail tank in the early laps. Lined up outside Buckwalter on a restart with five circuits complete, Nederostek throttled into the top spot and it was S. Buckwalter’s turn to become the hunter.

After another caution period with seven tours in the books, Nederostek and S. Buckwalter raced side by side for the lead, with Buckwalter attempting to slide up in front of the No. 769 in turns three and four. They hooked bumpers, with Buckwalter spinning as the bumpers unhooked, enabling Nederostek to drive away as the leader.

On the ninth revolution, Brad Brightbill grabbed the top spot from Nederostek. Brad soon had company at the head of the pack, however, as ninth-starting Billy Pauch Jr. sliced his way into the runner-up position on the 12th trip around the clay.

Pauch Jr. gassed his Heffner Motorsports/ Lelands.com No. 27 to the lead at the halfway point of the 30-lapper. While he didn’t run away and hide from the field, Pauch Jr. did maintain a somewhat comfortable advantage for the remainder of the event.

Jason Rochelle, who began the race in the 12th starting spot, weaved his way to second after a pile-up with 11 to go involved Brad Brightbill and several others.

At the finish, it was Pauch Jr. recording his first win since the May 14, season-opening Dick Tobias Classic. Rochelle, in his first year of SpeedSTR competition, registered a season-best second-place effort. Also notching a season-best finish, TJ Mayberry placed third ahead of the night’s sentimental favorite, Kenny Brightbill. John Bockhorn scored his best finish of the season with a fifth-place payday.

When his car is working well up top, and the high groove is begging for someone to pound the cushion, Eddie Strada is happy to oblige…and the show he produces is simply breath-taking. That was the case on Wednesday night.

The defending point champion of Action Track USA’s Hyper Racing Wingless 600 Sprints started fifth in the 25-lap feature and quickly discovered the high line was the place to be for his Russ Thornton-owned, RTS Chassis No. 36D. As Colin White set the pace over Jacob Severn, Kyle Lick, and Dan Schumaker, Strada cleaned off the marbles in the outside lane and went to work. He methodically picked off Schumaker and Severn, then swept past Lick for the runner-up slot one lap prior to the halfway signal. Strada’s rim-riding journey to the front continued as he blasted around White to take a slim lead as they crossed the stripe to complete the 16th tour.

Tim Buckwalter and Billy Pauch Jr. were navigating their way forward – Buckwalter started 18th and Pauch Jr. lined up tenth for the initial green – and, with their assistance, laps 18 through 22 were some of the most entertaining of the season at the track across from Kutztown University. Strada was committed to the high groove and White was real good on the bottom, so Buckwalter had to run the middle and Pauch went anywhere that he saw a glimmer of daylight.

Strada, White, and Buckwalter went three wide at times and swapped positions constantly during the five lap stint until a yellow with three to go put a temporary halt to the edge-of-your-seat, high speed fight. As the green reappeared, Strada pulled out by a car length or two as Buckwalter and White ran side by side for second. On the final circuit, Buckwalter cleared White’s No. 6 and Tim threw a huge slider on Strada as the leaders entered turn three. Eddie was ready, though, and he calmly crossed over in four, using the banking to launch his car under and past Buckwalter’s Greth Racing No. 71. Strada won the drag race to the checkered flag by one-quarter of a second over Buckwalter, with White earning a well deserved third place finish. Pauch Jr. and two-time winner Jason Swavely completed the top five.

“I want to dedicate this win to my sister,” noted Strada in victory lane. “She was in an accident last week and suffered burns on much of her body. She’s a fighter though and I’m proud to win one for her.” Regarding his intense battle with Tim Buckwalter, Strada smiled and said, “I had to put a wheel to him a couple times, and he did the same to me. It was hard racing and it’s all okay because I buy a lot of shocks from him.”

After a runner-up effort on May 24, Tanner VanDoren improved by one position on Wednesday, winning his first All Star Slingshot feature…and leading every one of the 20-laps to make it even more impressive.

VanDoren held off a hard charging Alex Yankowski for the victory. Yankowski slipped past Austin Stufflet to take over second with four to go and, while he closed in on the race leader, couldn’t get quite close enough to muster a serious challenge.
Stufflet held on to finish third, shaking off the terrible luck that has plagued his racing

season. Brett Bieber wound up fourth, and point leader Dylan Hoch, in a back-up car, negotiated his way from 23rd on the starting grid to finish fifth.

In the Junior Slingshot 15-lap main, Reese Nowatarski darted from the pole to lead every trip around the progressively banked oval. In the process, Nowatarski remains undefeated in three Action Track USA visits by the Junior Slingers this season.

Shelby McLaughlin wrestled the runner-up spot from Nico Flammer with three tours remaining, but Shelby could only close to within one-second of the high-flying Nowatarski by the time the checkered flag waved.

At the end, it was Nowatarski, McLaughlin, Flammer, Tommy Stillo, and Tyler Banks in the top five.

The facility was packed with fans on Wednesday, many of whom came to see and honor Kenny Brightbill. They were treated to some extremely competitive and entertaining racing by 28 USAC All Pro SpeedSTRs, 46 Hyper Racing 600 Sprints, 27 All Star Slingshots, and a dozen Junior Slingshots. That’s a grand total of 113 entries for a night of midweek motorsports mayhem!

Billy Pauch Jr. and Matt Janisch locked themselves into the SpeedSTR main event by recording the quickest laps in the Timed Dashes. Brad Brightbill, Steve Buckwalter, and Steven Nederostek won heat races and Tom Mayberry captured the B-main victory.
Jacob Severn transferred to the 600 feature from his win in the Pioneer Pole Buildings Mad Scramble. He also picked up some extra cash for winning from the Hosensack Poker Club. Heat race winners included Brandon Azzalina, Eddie Strada, Jason Swavely, and Colin White. A pair of C-Mains were taken by Damon Paul and Logan Snyder, while Alex Bright won the B-Main.

The All Star Slingshots ran a Mad Scramble and, for the second week in a row, Joey Vaccaro won to qualify for the 20-lap feature. Timed Dashes locked in several more of the Slingshots, and Nick Vinciguerra won the B-Main.

Kenny Brightbill was given a plaque at intermission to commemorate his many contributions to racing over the past 50 years as many of his family members, present and former crew members, and former car owners looked on, and he then took part in a match race with his sons, Brad and Keith (Brad won over Keith and Kenny). Mark Garman, who grew up going to the races at the Reading Fairgrounds where Kenny Brightbill enjoyed so much success, also shared several Brightbill-related stories, along with Kenny, with the large crowd.

This Wednesday, July 26, at 6:15 p.m., your Midweek Motorsports Adrenaline Rush begins with warm-ups, a Mad Scramble, and Timed Dashes for the USAC All Pro SpeedSTRs, the Hyper Racing Wingless 600 Sprints, and the All Star Slingshots. Qualifying heats, B-Mains, and feature races will follow and the Slingshots will be in the spotlight as they compete in the Kutztown Komet 100, a 100-lap grind that honors the memory of the late Freddy Adam, who was known throughout his illustrious dirt Modified career as the “Kutztown Komet”. The SpeedSTRs will race in a 30-lap main and the 600 Sprints will go 25-laps in their main event.

The JeffreyHogueRealtor.com Action Track USA on the Kutztown Fairgrounds is the place where the Superstars come to race!