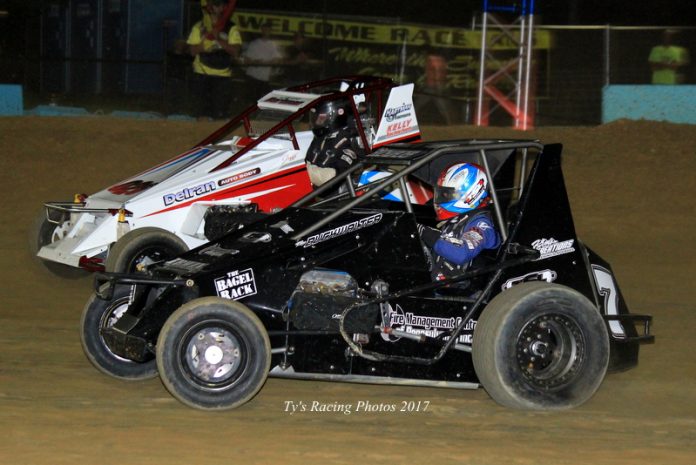 KUTZTOWN, PA – If distance and/or job-related commitments have prevented some racers and fans from attending events at the JeffreyHogueRealtor.com Action Track USA in Kutztown, then 2018 is definitely starting out on the right foot for those folks.

The new season at the Kutztown Fairgrounds oval will see just about all of its first half scheduled on Sunday evenings as opposed to the previous norm of Wednesday nights. After the traditional two-week break for the annual Folk Festival in late June/early July, the bulk of the second-half events will go back to Wednesdays.

“Last year, we ran twice on Sundays and had terrific car counts,” explained co-promoter Doug Rose. “We asked some of the first-time participants why we don’t see them on Wednesday nights, and they said it’s because they either live (or work) too far away or just can’t get away early enough to make it on time in the middle of the week. We also noticed an uptick in the grandstand attendance on those two Sundays so we decided to alter the schedule for this year.”

“We will run primarily on Sundays for the first half of the 2018 season,” added Rose, “because it also allows us to start an hour earlier, and that means we can get racers and fans out of there an hour earlier as well, which is important when they’ve got school and work the next day. An earlier finish will be welcomed by the surrounding community, too.”

The Sunday shows, which kick off on May 13 with the Goldie & Elton Meitzler Memorial, will see warm-ups getting underway at 5 p.m. with qualifying races immediately following the hot lap sessions.


The one exception to the Sunday slate of events will be on Monday, May 28, when the Memorial Day Showdown will be presented on the progressively banked clay oval.

“We didn’t want to run that Sunday out of respect for the annual Thunder on the Hill race at nearby Grandview Speedway,” said co-promoter Rich Tobias. “And racing on Memorial Day itself has kind of faded away, and we’d like to bring that back. So race teams and fans will be able to round out their holiday weekend with some great racing at Action Track USA.”

The same weekly divisions – the USAC All Pro SpeedSTRs, the Hyper Racing 600 Sprints, and the All Star Slingshots – will comprise the menu of competition at the Berks County speedway, with several big races earmarked for each of those classes.

The SpeedSTRs will compete in the annual Flyin’ Farmer 40 on June 13 with $3,000 going to the winner. And the traditional Dick Tobias Classic will provide a $5,000 payday to the winner of that 75-lap event on Sunday, August 5. “Regular” SpeedSTR features throughout the season offer a $2,000 winner’s share.

The immensely popular Hyper Racing (non-wing) 600 Sprints will race for a lucrative purse on six occasions, beginning with the King of No Wing Shootout on May 20. Other events boasting at least a $1,000 winner’s check (with Gambler’s Challenge) include the Tri-Track Challenge on July 11; a pair of 600 Speedweek dates on August 1st and 5th; and two big races during the annual Kutztown Fair – with one of those events being a “first ever” production at Action Track USA.

On Tuesday, August 14, the 600’s will wear wings for the first time under the Tobias/Rose promotional effort. That 35-lap A-Main will pay $1,500 to the winner (with Gambler’s Challenge). Then, the very next evening, the 600’s will compete in the track’s now-traditional 60-lap Fair Week National that offers $2,000 to win (with Gambler’s Challenge)! And that’s not all…a bonus of $1,000 is on the line for any driver who can sweep both the winged and non-wing A-Mains during the Fair!

There will be an open practice, for all divisions and especially for both the winged and non-wing 600’s, on Monday, August 13. The fastest 600 Sprint drivers in both categories will lock themselves into their respective A-Mains on Tuesday and Wednesday.

The All Star Slingshots will have a pair of races where everyone who enters is guaranteed to start the feature! Those events include the Kutztown Komet 100 on July 25 and the Dick Tobias Classic on August 5. The Slingers will also take part in the third annual Super Slingshot Fair National, paying $2,000 to the winner (with Gambler’s Challenge) on August 16, the Thursday night of Fair Week.

Other divisions that will see action during the 2018 campaign include the Junior Slingshots (five times), AMA Flat Track Motorcycles, and 4-Cylinder Stock Cars. The motorcycle race, another first time event at Action Track USA, will accompany the Super Slingshot Fair National on August 16. The 4-Cylinder event, open to all four cylinder stocks that compete at Linda’s, Trail-Ways, and at Enduros all over the northeast, will be part of the Tuesday, August 14 Kutztown Fair event along with the winged 600 Sprints. The 4-Cylinder Stocks will run heats, a consolation (if needed), and a 30-lap feature. A third division will also compete on the 14th, as the STARS Mod Lites make their Action Track USA debut in an International Championship Tour event.

The 2018 Action Track USA schedules will be distributed at this weekend’s indoor races in Allentown, PA (at the PPL Center) and at the upcoming PPB Motorsports Show in Oaks, PA on January 19-21.