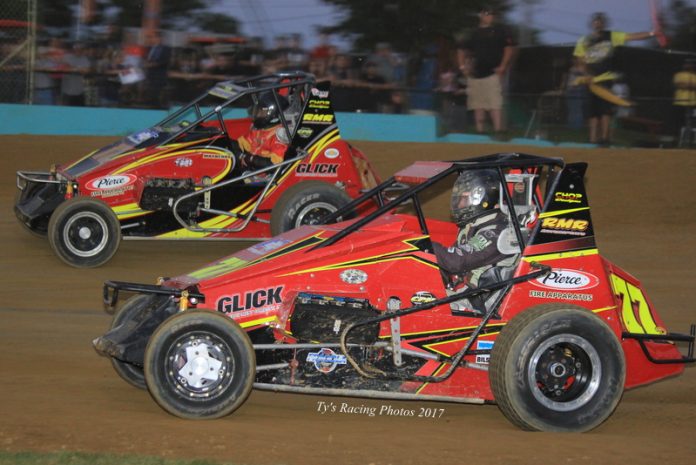 KUTZTOWN, PA – It just makes sense, as in dollars and “cents”.

Championship Energy Group, located in Reading, Pennsylvania is a local affiliate of Stream Energy, a national energy company. The insanely intense competition at Action Track USA on the Kutztown Fairgrounds has often been described as “electrifying”. So it’s only natural that a national electricity supplier and a spark-igniting speedway, one that has been a lightning rod of excitement for racers and fans, strike up a merger of sorts.

“We will be doing the same for the racers and crews, by offering $20 off their Pit Passes and providing free registrations” added Reinert. “There is no other race track that we are aware of that can offer pit passes to their racers and crews for just $5.”


“This is an awesome program that Championship Energy allows us to offer” said Rose. “Brad Reinert and I have put together a 5-year program with Championship Energy. This commitment from Brad and his Championship Energy Group will give us a great platform on which to build our track’s future while offering our fans and racers huge discounts on admission prices – and they will be saving money on their utility bills at the same time!”
Race teams and fans can get a jump start on your FREE Action Track rewards for the 2018 season by bringing your electric bills to the Action Track USA booth at the PPB Motorsports Race Car & Trade Show in Oaks, PA on January 19, 20, & 21.

Many folks don’t even realize that you do not have to use your local utility company when purchasing electricity and/or natural gas. The local utility provides the poles and wires, but you have the choice to decide who provides the kilowatts to your home. The utility still delivers the electricity, reads the meter, and sends the bills. The same philosophy applies to natural gas. You, the consumer, just save money.

Deregulation has allowed Championship Energy to be one of the many energy suppliers that one can choose to provide electricity and natural gas. So, why not choose the one that supports the sport we all love!

Championship Energy offers competitive fixed rates by being an affiliate to one of the largest national energy companies, Stream. Your local utility provider typically has variable monthly rates, but with Championship Energy you get the security of locking in a rate just like you do on a home mortgage. You can secure a fixed rate with options of 6 months, 1 year, and even up to 2 years.

“The dedication and loyalty of racers and fans, demonstrated by their use of sponsors’ products, is second to none”, stated Rose. “And we want to reward them for that loyalty. To take advantage of the savings offered by Action Track USA and Championship Energy Group, simply go to the newly re-designed website, www.ActionTrackUsa.com and click on Championship Energy Group Rewards. This is HUGE for the world of motorsports!”

Founded in 2005, Stream is an electricity and natural gas supplier that has an unusual sales strategy. Instead of selling energy through conventional methods, Stream energy is sold by word of mouth. In fact, Stream is the country’s largest direct-selling electricity and natural gas supplier. However, Stream energy supply rates aren’t the only offering of this provider, as the company also offers mobile and protective services.