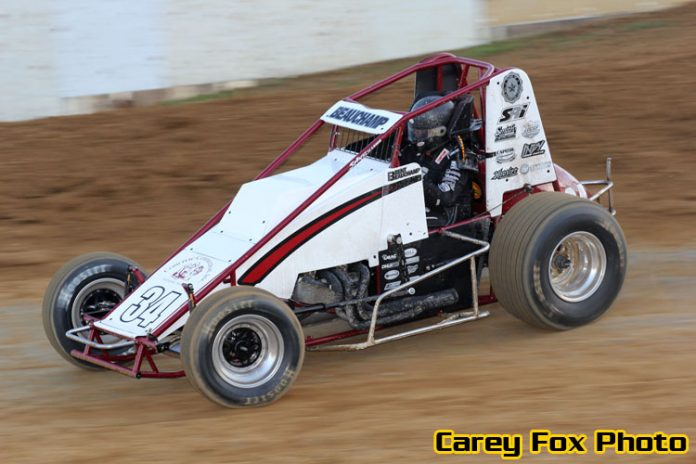 PUTNAMVILLE, IN — On a chilly, but sunny evening a Lincoln Park Speedway round two of the 2018 season was contested at the Putnamville oval. Brent Beauchamp claimed the sprint car feature event with Derek Groomer (UMP Modifieds), Josh Litton (bombers) and Wes McClara (UMP Super Stock) repeating as feature victors.

Brownsburg’s AJ Hopkins started on the pole for the sprint car feature after dominating his heat race. He appeared set to do the same as the A-main began as Hopkins cruised out to a solid lead as Beauchamp settled into second place. The duo pulled away from the field as Clinton Boyle’s pulled into third-place with fourth being contested strongly between Jeff Bland Jr. and Colten Cottle.

Beauchamp reeled Hopkins in between laps eight and nine and pulled even on the 10th circuit. The pair battled wheel to wheel for a lap before Beauchamp pulled ahead moments before Koby Barksdale flipped into turn two to bring out a red flag. Barksdale was uninjured in the crash.

On the restart, Beauchamp maintained his lead ahead of Hopkins as Boyles remained in third-place with Bland challenging.


With five laps remaining, Bland charged hard into turn one and made the pass for third-place and set his sights on the leaders. Beauchamp had his hands full as Hopkins and Bland both made their presence known before a caution flag re-set the field with three laps to go.
On the restart, Hopkins made a last ditch effort to get past Beauchamp in turn two and made slight contact with the leader as Bland nearly got past for the second position.

However, Beauchamp shot free out of the second turn and pulled out the victory in the Jeff Olson-owned No. 34 sprinter. Hopkins claimed second ahead of Bland, Boyles and Colten Cottle.

In the $500 to win bomber Spring Fling race, Litton broke free of a battle with Cody Wright and Jeff Beggs running the high side and rocketed away for the victory.

Litton started fifth in the field with Tom Cox starting on the pole after winning his heat race. Cox would be sidelined early with mechanical issues as Beggs powered into the lead ahead of Wright and Linton with AJ Smith in tow.

Beggs held a slight lead over Wright in a hard fought battle for any advantage as Litton joined the fray by lap nine. Smith was hot on the lead group’s heels with Travis Heramb and Jordan Almanza duking it out for fifth.

Just past the halfway mark, Beggs had settled into the lead ahead of Wright, but Litton had come to life with a line around the top rim of the track. Litton blasted to the lead with five laps to go and roared away from Wright, who moved into the second position as the checkered flag flew. Beggs remained in third-place at the finish with Almanza making his way to the fourth spot ahead of Josh Foxworthy.

The UMP Super Stock feature was nearly a mirror image of the main event a week previous.

Jonny Newgent powered out to a big early lead ahead of the field before being reeled in by McClara, who made his decisive pass with two laps remaining.

Newgent led from the outset of the A-main after starting fourth overall. He pulled out to a strong lead as Chris Hillman and Doug McCullough fought for the second spot door-to-door.

However, McClara was stalking his chance to move up and did so by the 10th lap as Newgent got into lapped traffic.

A caution with seven laps remaining re-set the field and by lap 15 McClara had pulled even with Newgent while running the high line ahead of Dale Hayes with Bryce Shidler and McCullough close behind. With two laps to go, McClara made his move and got around Newgent on the top and was able to pull out to claim his second win of the young season. Newgent, Hayes, Shidler and McCullough rounded out the top-five.

In the UMP Modified main event it was Groomer running on a rail to a dominant repeat win over the rest of the field. The Bloomington, Ind. native started outside of row one alongside Jay Humphrey Jr. and quickly took the top spot.

Humphrey and James Walters were contending for the second spot through the halfway point ahead of Josh McDaniel and Sydney Landes.

As Groomer built a strong lead 10 laps in it was Walters that took the second spot for several circuits, but Humphrey would track him down with two laps to go. Groomer would pick up his second win of the year as Humphrey advanced into the second spot ahead of Walters, McDaniel and Landes.