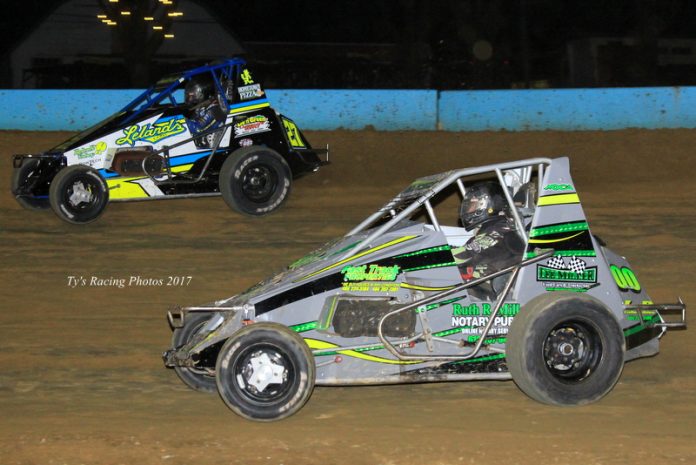 KUTZTOWN, PA – The USAC All Pro SpeedSTRs, Hyper Racing 600’s, and All Star Slingshots will fill out the menu when the Goldie & Elton Meitzler Memorial raises the curtain on season six of the Rich Tobias/ Doug Rose regime at Championship Energy Action Track USA on Sunday, May 13. Pit gates open at 3 p.m., and the grandstand gates swing open at 4:00. Warm-ups begin at 5 p.m. with qualifying events getting underway immediately following the hot lap sessions. The Meitzler Memorial will be capped off with a 30-lap main for the SpeedSTRs, a 25-lap romp for the 600’s, and a 20-lapper for the All Star Slingshots.

Over the past three seasons, a pair of throttle-mashers have garnered most of the headlines generated at the Berks County oval. They compete in both the USAC All Pro SpeedSTR and Hyper Racing 600 Sprint divisions, and will once again lead a large and talented field of racers when the green flag waves in the Mother’s Day season opener.
Tim Buckwalter (two in the 600’s and one in SpeedSTR) and Billy Pauch Jr. (two in SpeedSTRs) have combined for five overall track championships at the playground of clay on the Kutztown Fairgrounds. In addition they are the all-time leaders in feature wins in the SpeedSTR and 600 classes at the speedway located across the street from Kutztown University.

Pauch Jr., who did not have a steady ride in the USAC SpeedSTRs when that division made its debut at Action Track USA in 2013, leads all drivers with a dozen triumphs in the track’s first five seasons. Buckwalter, with nine victories in the past two years, trails Pauch Jr. by just one as they get set to renew their friendly rivalry on May 13. While Buckwalter will be chasing non-wing Sprint Car glory all over the country in 2018, he is expected to miss only one event at Action Track USA.

Mike Mahaney of Kings Ferry, NY has four SpeedSTR wins and has indicated he will be in the field at Kutztown whenever his Modified and Sprint Car schedules allow. Earl Paules, Jeff Hartman, and Steve Drevicki each have a pair of SpeedSTR triumphs and will certainly challenge Buckwalter and Pauch Jr. for each week’s checkered flag. Matt Westfall, the Ohio chauffeur who was a tremendous addition to the Action Track USA SpeedSTR field in 2017, returns for another season after picking up one victory in his first campaign.

Stephen Nederostek, Matt Janisch, Briggs Danner, and Steve Buckwalter are just a few of the competitors who have been knocking on the door to SpeedSTR victory lane and are ready to kick it in during the upcoming season.


The ultra-competitive Hyper Racing 600 Sprint division had a trio of first time winners last year, with Jim Radney, Kyle Spence, and Jason Swavely adding their names to the track’s all-time win list. Radney captured the season-opening Meitzler Memorial for the 600’s, while Spence and Swavely each picked up a pair of victories. Spence, from Vineland, NJ, earned the division’s biggest wins, taking the King of No Wing Shootout and the 60-lap Kutztown Fair Nationals.

But it was Tim Buckwalter, the Douglassville, PA wheel-twister in Barry & Cheryl Greth’s No. 71, who recorded three wins and his second Hyper Racing 600 point title (in the past three years) at Championship Energy Action Track USA. Buckwalter has 12 career 600cc victories at the speedway, exactly twice as many as the driver who sits second in all-time 600cc wins, Alex Bright. Eddie Strada, the 2016 point king, is tied with Pauch Jr. for third place on the feature winners’ list with five each. Jay Hartman and Kyle Lick have four career triumphs and are ready to contend once again.

Seven drivers scored their first career Action Track USA wins in All Star Slingshot activity during the 2017 campaign, but it was Mertztown’s Dylan Hoch who emerged with his second straight point championship and moved to the number one spot in all-time Slingshot victories at the progressively banked oval. His two wins last year pushed his career total to seven, propelling him past Brett Bieber and Mark Sensenig (who each have six career triumphs) and into the number one spot.

Hoch returns as will Bieber, the former track champion who looks to rebound from a zero-win season at AT USA. Other drivers expected to challenge for wins and the ’18 Slingshot title include Dave Carraghan, Jared Silfee, Tanner VanDoren, and Nick Vinciguerra, who became a first time winner in the final race of 2017.

More information on the opener, along with all the news from a busy off-season, is available at www.actiontrackusa.com and on the speedway’s Facebook page.